This woman might be wild card who stops Erdogan

As Turkey's ruling political party struggles to revive its mojo, a challenger is rising who could take on President Recep Tayyip Erdogan. 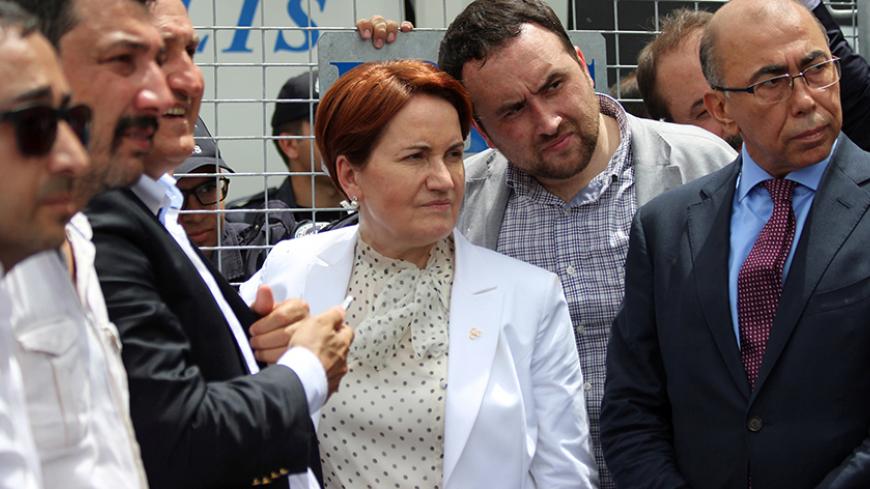 Turkey’s ruling Justice and Development Party (AKP) marked its 16th anniversary this week, and its history has been an amazing story. A party that was crafted by the disheartened of banned political Islamist parties and who called themselves the “movement of the virtuous” spent 15 of those 16 years as the party in power — the longest period for any party in recent Turkish history.

Pompous celebrations and ceremonies were held to underscore the might of its leader, President Recep Tayyip Erdogan. Some 6,000 people were invited to the main ceremony.

One of the expected guests was the co-leader of the “movement of the virtuous,” former President Abdullah Gul. Yet he did not attend. In fact, his absence is one indicator of how the “birthday party” turned out to be bland.

Even before the soulless celebrations, there was talk in AKP quarters about the “fatigue” of the ruling party. Erdogan’s return to the chairmanship wasn't enough to rejuvenate the party. Erdogan himself admits the party apparatus has lost its vigor.

“Those who are tired should [give up] their positions to new ones,” Erdogan said at an AKP meeting in July in Ankara. Some party members took his remarks as a signal of drastic change in the works, further increasing the unease within their ranks.

As a result, Erdogan tried to soothe the atmosphere with one of his speeches on the eve of the anniversary. “Upcoming changes in the party should not be considered a purge, but a renewal,” Erdogan said at an Aug. 14 public rally in Ankara.

Speaking at the anniversary ceremony, Prime Minister Binali Yildirim said he hopes the “metal fatigue” being felt among the party’s ranks is temporary. For some time now, the phrase has been used to define the AKP's performance.

Paradoxically, Erdogan’s strong grip over the party could be sapping its energy. Neither he nor Yildirim rejects that idea.

Gunter Seifert, an expert on Turkey for the German Institute for International and Security Affairs (SWP), attributes the weariness to the party's devolution into a cheerleading squad for the president. The AKP has "reduced itself to a propaganda machine and lost its power in shaping politics," he told Germany's Deutsche Welle media company.

According to a relatively influential and sometimes mildly critical Islamist columnist, Ahmet Tasgetiren of the pro-government daily Star, the reason for the lethargy afflicting "the party of the virtuous" is its flagging virtue.

“A new movement of the virtuous” is needed, Tasgetiren wrote in an Aug. 15 column.

It's almost impossible to expect the AKP to make that kind of shift against Erdogan. The only person with an AKP background who could initiate such a change is Gul, but given his overcautious style and unwillingness to confront Erdogan directly and openly, it would be a far-fetched hope that he could revive the party.

Those hopefuls who want to see Erdogan removed from power one day seem to be converging around Meral Aksener. More and more she is emerging as a wild card in Turkish politics.

Aksener was interior minister briefly during the late 1990s and served a long stint as a deputy speaker of parliament during the AKP's reign. During the 1990s she was a parliament member representing a center-right party. More recently, she was a representative of the Nationalist Movement Party (MHP), an ultranationalist party also known as the Gray Wolves. However, she rejected the new line of MHP leader Devlet Bahceli, who has transformed the party into an Erdogan appendage. Among a group of party elders, she rose to prominence in 2016 as a Bahceli challenger, but the judicial system under Erdogan's control blocked her way. She then left the MHP — actually, she was expelled from the party with a decision contested legally — to launch a new party, attracting a considerable MHP constituency.

Her efforts to initiate the new political party — designed to attract all those despairing of Erdogan mainly on the right side of the political spectrum — gained momentum rapidly. She is expected to officially introduce the party in October or possibly even next month.

There are rumors that in addition to those who left the MHP, a number of AKP figures — even parliament members — might join Aksener’s party. Aksener’s team has been saying the public will be surprised.

One potentially major obstacle, among many others on her way, is how Erdogan could react to her moves. Also, how will Aksener enlist Kurdish support given that her team includes nationalists and anti-Kurdish figures? If she can find the formula to gaining the Kurds' support, she could be the figure most likely to unseat Erdogan.

There are many questions. Elections are scheduled for 2019, but what happens if Erdogan decides to hold early elections in 2018 before she can build a sufficient party structure?

Those who want Erdogan's era to end could pin their hopes on Aksener's charm and stamina, aided by the AKP’s “metal fatigue,” which seems to have no remedies and therefore may be fatal.