How Germany accidentally gave Erdogan a boost ahead of key vote

Are German authorities doing the right thing by not allowing Turkish politicians to hold rallies in Germany? Here is why they are not. 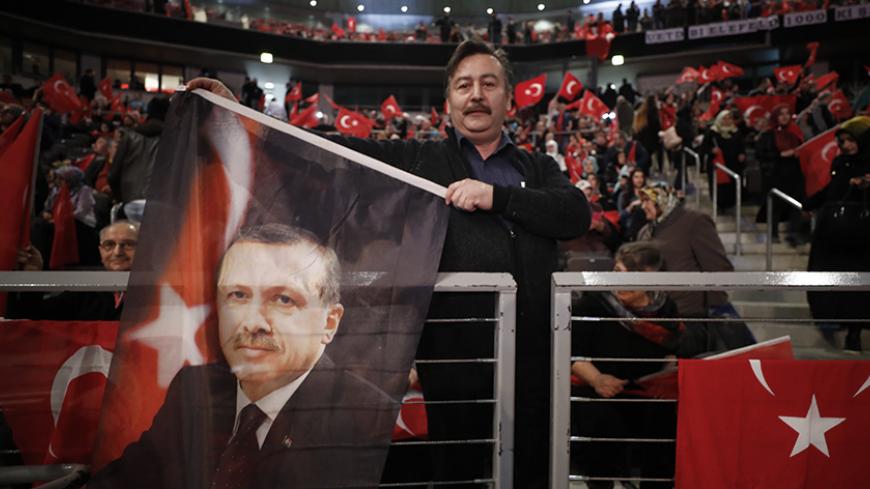 On March 2, Turkish Justice Minister Bekir Bozdag was supposed to speak at a big public rally organized by the Turkish community in Gaggenau, a southwestern German town. The event was designed to garner more “yes” votes from the 3 million Turks living in Germany for the upcoming constitutional referendum in Turkey. Turkey’s ruling Justice and Development Party (AKP) and its ruling strongman, President Recep Tayyip Erdogan, already enjoy widespread support within the German diaspora, and Bozdag was apparently hoping to give that mandate an additional boost.

However, at the last moment, the event was canceled. The Gaggenau municipality declared that the hall allocated for the rally was withdrawn due to concerns about “parking space.” Back in Turkey nobody believed this and everyone believed the decision was politically motivated censorship in response to Turkey’s detainment of Deniz Yucel, a German-Turkish journalist who has written several articles critical of the Turkish government. Erdogan slammed Germany for silencing a Turkish minister, while giving all the free space to Turkey’s enemies. Erdogan also remarked that in the past his participation at a rally via a video conference was blocked by Germany’s Constitutional Court — marking “a phenomenon not seen anywhere in the world” and a blunt attack on free speech. In a later speech, he even condemned Germany for “fascist actions” that were reminiscent of the Nazi era.

Notably, not just the government, but also the main opposition Republican People's Party (CHP) joined this critical line. “The speeches of Justice and Development Party lawmakers were canceled in Germany,” noted CHP leader Kemal Kilicdaroglu, who is normally very critical of the government. “This is never, ever right.”

One point that was emphatically made by the Turkish government was crucial: that the Germans are “hypocritical.” Both the German government and the media routinely criticize, if not condemn or ridicule, Turkey for silencing free speech. Yet they did the same thing to the justice minister. “We have nothing to learn from Germany on democracy,” Bozdag declared. Turkish EU Affairs Minister Omer Celik even took a somewhat satirical line and said that German politicians would be welcome to organize rallies in Turkey — implying that Turkey, unlike Germany, is a free country.

In other words, the Gaggenau incident turned out to be the perfect ammunition for a propaganda technique that the AKP government has increasingly used in the past five years: “Whataboutism.” This was a term originally coined to describe Soviet propaganda during the Cold War about the “real democracy” in the USSR and the hypocrisy in the West. All criticisms about the Soviet condition would be dismissed by pointing to flaws and double standards in the West, real or perceived, and asking “What about this?” “What about that?” The real issue at stake, that the USSR was a brutal dictatorship, was never addressed.

Turkey, of course, is not as dictatorial as the USSR — it has, at least, free elections — but “whataboutism” works in the same way. By cherry-picking examples of anti-liberalism in the West, or by totally inventing them with unabashedly fake news, the AKP government and its supporters deny that Turkey is less free than Western liberal democracies. All those who argue otherwise, they add, are the foreign enemies of Turks and their domestic collaborators.

The reaction against the Gaggenau affair is, and will be, used for the same purpose: whitewashing Turkey’s own suffocating limitations on free speech. During this referendum campaign, for example, Turkish opposition leaders — especially opponents within the Nationalist Action Party, whose leader became Erdogan’s best ally — have been unabashedly silenced by local authorities who are all tied to Ankara. That Turkey imprisons critical journalists — with trumped-up charges of “being a member of terrorist group” — is now a globally infamous fact. Such facts are why Freedom House, which once also documented the expansion of freedom in Turkey in the earliest years of the AKP, has lately put Turkey in the category of “not free” nations with regard to its press freedom. These are bitter facts about Turkey that no “whataboutism” can really hide.

Yet the Turkish behavior is one side of the discussion here, and the German behavior is another one. Is the latter right? Are German authorities doing the right thing by not allowing Turkish politicians to hold rallies in Germany?

My answer is a clear “no.” By disallowing the Turkish justice minister to speak to Turks in Germany, the German authorities have gained nothing other than vindicating Turkish “whataboutism” and delegitimizing themselves in the eyes of many Turks — even the main opposition. Similarly, the Dutch government will achieve nothing by disallowing a Turkish rally in Rotterdam other than the same bad results.

There is a conceptual problem here — and it is a selective scope of free speech: Some Europeans seem to think that those who deserve free speech are only those who can be called liberals, leftists or democrats. Bernd Riexinger, the leader of the German leftist party Die Linke, made that point clearly when he opposed the Turkish rally in Gaggenau. “The federal government must make it clear that in Germany no spirit can be created for the establishment of a dictatorship,” he said. It is the same logic as that of the protesters at the University of California, Berkeley, who blocked a talk by alt-right political commentator Milo Yiannopoulos.

Yet all of these “liberal” free speech banners on both sides of the Atlantic are wrong. Their actions are not only counterproductive but also inconsistent. Their attitude comes close to saying, “We ban free speech to those who ban free speech,” which is tautological and self-defeating.

Free speech must rather be protected for everyone — to be principled and effective. Not just liberals, therefore, but also autocrats and their lackeys must be able to make their voices heard. Only then will the difference between liberalism and authoritarianism become clear. Only then, perhaps, even some of those who have fallen for authoritarianism will begin to change their minds.