As the April 16 referendum approaches, Turkey's president is trying to whip his supporters into a frenzy by lashing out at Europe, spewing epithets and pledging to reinstate the death penalty. 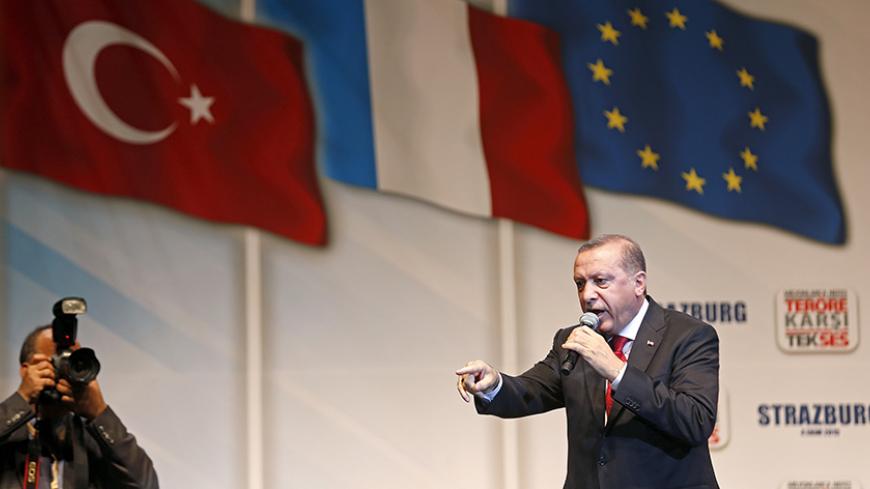 Until the fateful date of April 16, when the Turkish people will vote on whether to expand the powers of President Recep Tayyip Erdogan, there won’t be a single day that he refrains from slamming the European Union as an institution and Europeans in general. For each day that he thrashes them, he further consolidates Turkish nationalism as the main ingredient to ensure his victory.

On March 21, he was being as provocative and vitriolic as possible to upset his European counterparts after Germany and the Netherlands banned Turkish-organized rallies designed to raise support for Erdogan's referendum.

“The masks of the EU member countries fell and their real face appeared. ... These [EU countries] have no humanity, no conscience, no compassion. ... This Europe is the racist, fascist Europe of the pre-Second World War [period]. This Europe is the medieval Europe that was the enemy of the Turks and Islam,” Erdogan said.

Germany had already reacted to his previous inflammatory accusations against Chancellor Angela Merkel by saying he had "gone too far.” Merkel herself said in a diplomatic but nevertheless very strongly worded statement, “Turkey’s accusations on Nazism and fascism will not be allowed anymore.”

Nothing seems to deter Erdogan from branding Germany, the Netherlands or any EU country that might stand in his way as “fascist” or “Nazi.” As his record shows, he is a master of election campaigning. He hasn't lost a single election since 1994, the year he was voted in — to the surprise of many — as Istanbul's mayor. The only possible exception was the general election on June 7, 2015, when his governing party lost its parliamentary majority. He did not accept the results and called for a rerun of the election Nov. 1, which provided him with the results he was searching for.

He expects April 16 to be the crowning jewel of his efforts to put Turkey under his strong, personal grip — a new country with a new regime. Therefore, anything he says to help himself win can be chalked up to his Machiavellianism.

Yet where do we place his pledge to reinstate capital punishment, which he reiterated in his speech March 18, the anniversary of Turkey's 1915 success against British and French forces in the Dardanelles Campaign?

The symbolism of the occasion may have been missed by many. The Dardanelles, the great sacrifice the nation is believed to have made in the midst of World War I, is always commemorated by a reference to the “martyrs” and with a strong connotation of a noble, patriotic resistance to the Western powers.

In Erdogan's view, capital punishment is a tool of revenge to assuage the families of those killed in service to the nation. In the city of Canakkale (the Turkish name for Dardanelles), in his March 18 speech, he spoke as if addressing the families of those killed, saying, “I believe, Insha’Allah (God willing), that after the April 16 vote, parliament will do what is necessary concerning your demands for capital punishment.”

He has repeatedly said that if capital punishment is reinstated by parliament, he will sign it into law. Thus, his statement could well be interpreted as a reminder to parliament that he largely controls what they should do after the April 16 vote.

But why wait until that date? Because then, assuming he wins, he will be bolstered by the “popular will,” and will present it as a “mandate given to him by the nation.”

That is why his pledge to bring the death penalty back into Turkey’s penal code — and his bombast about pre-WWII fascists and Nazis in an anti-Turkish, anti-Islam, medieval-thinking Europe — should be read and understood in connection with each other.

That is in stark contrast to those days when Erdogan started his career at the head of the Turkish government during the first years of the 2000s. Turkey had completely abolished the death penalty in its efforts to join the EU. From the first election victory of the Justice and Development Party (AKP) under Erdogan's leadership, Turkey tried hard to comply with the Copenhagen criteria to start accession talks with the EU. Both Erdogan and the AKP secured their hold on the Turkish government thanks to being staunchly pro-EU.

After almost a decade, Erdogan is much different. He once felt Europe could guarantee his position of power. Now Europe is a big headache for him. Today’s Europe is an ideal straw man for him to use in consolidating his nationalist power base.

In this sense, bringing back the death penalty is neither a bluff nor a bargaining chip: It is real. As much as abolishing it once symbolized Turkey’s intention to integrate itself into the EU, reinstating it would symbolize Turkey’s determination to detach itself. Europe could have acted as a permanent watchdog over Ankara. Now, if Erdogan breaks from Europe, he would unshackle Turkey from any sort of democratic checks and balances.

Europeans seem to be preparing themselves for such an eventuality, parting ways with Turkey in terms of EU membership. European Commission chief Jean-Claude Juncker has warned Turkey that any return of the death penalty would be a "red line" in the country's stalled EU membership bid. Juncker nevertheless said he was opposed to threatening a complete halt to membership negotiations with Turkey. It would make no sense to try to influence Erdogan "by stopping negotiations that are not even taking place" at this time, he noted.

German Foreign Minister Sigmar Gabriel went even further, saying in an interview with Der Spiegel, "We are farther away than ever from Turkey's accession to the EU."

Erdogan is well-aware of that fact; that is what he wants at this very moment. For a complete break, he'll need to go the extra mile and reinstate capital punishment. For that, you will have to wait for the results of the April 16 referendum. We have less than a month to go.