What Rouhani wanted from Putin in Moscow visit 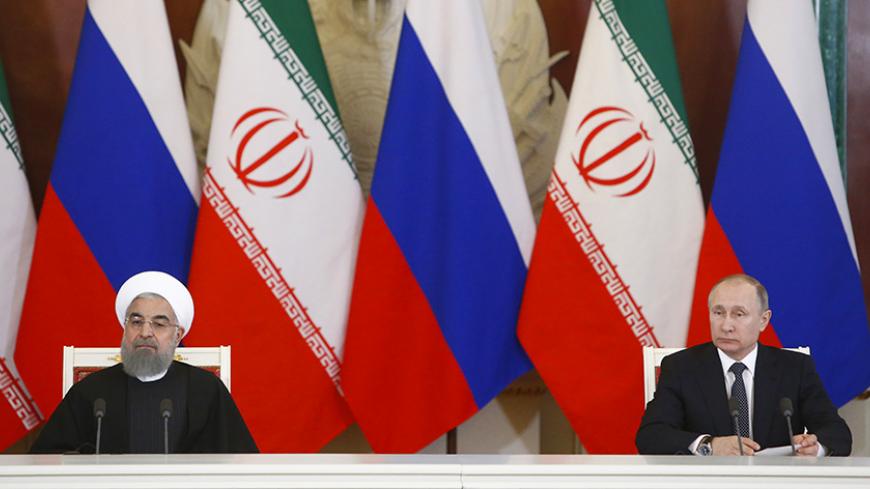 This week’s visit of Iranian President Hassan Rouhani to Moscow was a much-anticipated event not only in Russia and Iran, but throughout the region.

The parties intending to emphasize its significance brought up the numbers: the first foreign trip of Rouhani this year, the first encounter in a purely bilateral setting, the ninth meeting of Vladimir Putin and Rouhani in total. Outside observers were racking their brains guessing what issue would dominate the agenda. Some suggested it would be arms purchases and energy deals, while others believed it would be more about strengthening bilateral trade and economic relations. At the end of the day, it mattered little since all of this — and a lot more — was to be thoroughly discussed during the two-day visit. What mattered a lot was the very context before and around the meeting.

Rouhani’s meeting with Putin came after Israeli Prime Minister Benjamin Netanyahu and Turkish President Recep Tayyip Erdogan both had separate trips to Moscow. In this sense, Rouhani’s visit fit in the puzzle of Russia’s own dealings with the three most powerful regional states. They all have divergent strategic interests and would ideally want to have Moscow support their cause or at least to not act as a spoiler for it. Russia, in its turn, seeks to have a balanced relationship with all three, sticking to its approach of “keeping the contacts open with all the regional players” even if they are in dire opposition to one another. Therefore, in his opening sentence, Putin thought it was necessary to emphasize: “Iran is our good neighbor, a stable and reliable partner.” As in the case with Netanyahu, who was apparently seeking guarantees from Putin that Russia would not — directly or circumstantially — aid Iranian influence in the region in the post-Islamic State (IS) Syria and Iraq, Rouhani hoped to persuade Putin that Russia should not in any way help Israel in its counter-Iranian policies or share sensitive intelligence information — currently a big chunk of Moscow-Tel Aviv bilateral dealings — that might seriously hurt Iranian positions. As if preempting any speculation on this issue, Rouhani in his own remarks to Putin noted, “Our cooperation is not aimed at third countries.”

Another important aspect of the meeting was Iran’s concern that Russia could adopt a new attitude toward Iran in light of a potential “normalization” with the United States under President Donald Trump. Moscow recognized that Tehran was seriously concerned that the Kremlin would use it as a bargaining chip for better ties with the White House. So in the case with Israel, Rouhani may have needed if not solid guarantees then at least some sense of confidence in Putin that this wouldn’t happen. Coincidentally, the US Department of State has recently imposed new sanctions against eight Russian companies “in connection with the Iran, North Korea and Syria Nonproliferation Act,” angering the Kremlin that stated the move contradicted Trump’s voiced desire to have good relations with Russia. The next day, Iran announced its own counter-sanctions against American military companies allegedly involved in supporting Israel’s settlements. Putin and Rouhani expressed their anti-sanctions sentiment in the final joint document the two leaders signed that said, “Unilateral sanctions against states are illegitimate.”

Finally, Russia and Iran have been tactical partners in Syria and have a common interest in tackling radical Salafi groups across the Middle East. Yet it is not in Moscow’s interests to play on the side of Iran in its own confrontation with the Gulf monarchies or get involved in the broader Sunni-Shiite standoff. Neither of the two partners entirely share a vision for post-civil war and post-IS Syria. Russia has been courted by the Syrian opposition as well as in some ways by the Gulf monarchies to depart from Iran as a way to receive a more lofty status of “mediator.” In the long run, this might suit the Kremlin’s interests better than being a party to the conflict. What Moscow actual thinks about this is a mystery wrapped in a riddle for many, including the Iranians. Perhaps, as a means to win Moscow over, Iranian Foreign Minister Mohammad Javad Zarif said that Russia could use Iranian military bases to launch airstrikes against militants in Syria on a "case by case basis." Rouhani doubled down on this in the final press conference, with Putin saying Moscow and Tehran “will continue to cooperate in Syria until [IS] is defeated.”

As Al-Monitor correspondent Hamidreza Azizi accurately suggested, the election factor must also play a certain role. Rouhani has to demonstrate to his constituency at home that the course toward dialogue rather than confrontation with major Joint Comprehensive Plan of Action signatories has borne fruit — even if it’s more with Moscow than anyone else. Signaling understanding of this need, Putin endorsed Rouhani’s performance by saying that “last year the two countries have increased their trade turnover by 70%, [which was] in no small part due to the work of yourself and your government.”

Vladimir Sazhin, a leading Iran expert at the Russian Institute of Oriental Studies, believes the goodwill behind the meeting leaves space for optimism: “There are disagreements between Russia and Iran. But both are united in their desire to tackle burning issues of the Middle East. There are also opponents of the rapprochement between the two countries in both Russia and Iran, but objective trends speak in favor of joint solutions to the problems. I’m not talking about an allied relationship. But the partnership I’m talking about should be based on pragmatism.”

Indeed, conceptually the visit was important in that it tried to create new growth points for the bilateral relationship. Prior to the meeting with Putin, Rouhani held talks with Russian Prime Minister Dmitry Medvedev where the Iranian leader expressed hope that the visit may be “a new turning point in the development of the bilateral relationship.” He also noted that the relations weren’t “confined to just one area.” The remarks suggested that the current state of Russian-Iranian relations reached a certain ceiling where the existing contradictions started hampering prospects for a partnership. Should Moscow and Tehran be serious about maintaining the partnership, it was critical for both to reload the relationship with a qualitatively new agenda.

This agenda was sought for and apparently found in a great number of politically important deals signed. Moscow seems to be satisfied with most, if not all: the access Russian energy companies got to the oil and gas deposits in Iran; the creation of a free-trade zone between Iran and the Eurasian Economic Union; the construction of two new reactors in the Iranian city of Bushehr; modernization and electrification of the Iranian railways by Russia; and the forthcoming Iranian membership in the Shanghai Cooperation Organization. It doesn’t seem to bother either party that in the future Russia and Iran may find themselves in a situation where most of the good initiatives are lacking embodiment in actual investment-supported projects. It was, nevertheless, important for the two to signal to one another and the rest of the world that they are still looking in one direction, even if they are not looking at it in a similar way. This has been achieved, even if it’s just at the level of perceptions.