Sanctions give Moscow, Tehran something to talk about

US sanctions are indeed drawing Russia and Iran closer, but the question now becomes just how close. 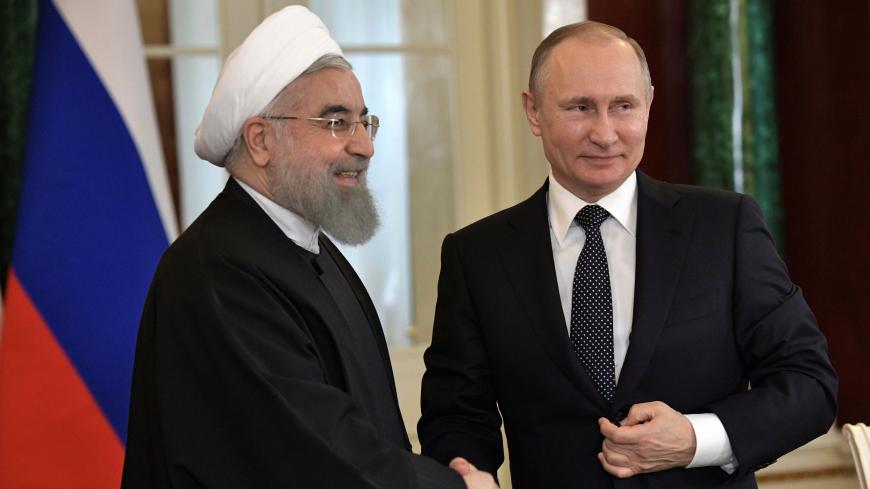 Predictions that US sanctions will drive Russia and Iran closer to each other appear to be on target. Moscow and Tehran are already coordinating closely on negotiations to end the civil war in Syria, and they may consider strengthening their cooperation in other spheres once Damascus is squared away.

The US Congress' Countering America’s Adversaries Through Sanctions Act (HR 3364) revitalized talk of a strategic relationship between Russia and Iran. Russian analysts and policymakers have been attentively studying the experience of Iran, whose government and people have been grappling for many years with the consequences of international and unilateral US sanctions. Moscow has long tried to capture something useful from Iran’s experience, but eventually tends to conclude that Iran’s case is very different economically, geopolitically and in terms of political organization and industrial development. Thus, the argument goes, even if some experience is to be borrowed, it should be done carefully and with duly appraised adjustments.

Yet a sense of common destiny between Moscow and Tehran has been on the rise since Russia annexed Crimea in 2014. American and European sanctions against Russia at that time made Russian and Iranian leaders ponder the prospects of a greater consolidation in their complicated relationship. Now that sense is being reinforced by new sanctions from a common antagonist — the United States.

Iran proved that a country can live under sanctions and show growth in gross domestic product, even when actual development is in deep stagnation. Previous sanctions against Iran, though, targeted mostly domestic projects and its oil exports.

In 2015, experts from the Institute of Strategic Analysis predicted Russian GDP would decline 1-2% annually, noting that delayed effects of the sanctions would show up only after several years. Russia had alternative import plans in place even before the Ukraine crisis.

With the new sanctions, the incentive to find more alternatives is stronger.

What happens to the projects abroad where Russian participation exceeds the restrictions of sanctions? The constraint means American technology cannot be supplied for the upstream projects related to the Arctic, deep water and shale oil if the share of Russian companies in those projects exceeds 33%. Russia’s state-owned oil giant Rosneft holds significant interests in some major projects — such as Solimoes in Brazil (45% share) or Petroperiha in Venezuela (40% share). Rosneft predicts the sanctions will hurt US interests.

Though sanctions against Iran and Russia were passed in a single act, the reasons for and the targets of those sanctions are different, thus implying the governments’ responses might be different. The pressure on the Russian energy sector might be an implicit act of "unfair competition," as the Kremlin suggests, on the part of the United States to eliminate a big competitor in the oil and gas market under a political pretext.

However, the United States could also have another agenda — to strike against Russia’s income-generating sector, which acts as a guarantor of that government’s legitimacy. The ability of sanctioned Russian companies to operate in the shadow market — the way Iranian companies did — as well as to invest in research and development, will define Russia’s overall ability to overcome the sanctions.

According to experts in Russia, such as those at Capital Economics, Russia’s economic situation wound up being negatively affected not so much by the sanctions imposed against Russia in 2014 but rather by the slump in oil prices and by a boomerang effect from counter-sanctions Russia imposed against the European Union. Even though it has been three years since the first wave of sanctions, and Russian citizens acknowledge they feel the effect, they believe the recent sanctions won’t inflict additional damage. Therefore, a “politically destabilizing effect” on Russia, similar to that anticipated from the “crippling sanctions” against Iran in 2012, is highly unlikely, even in the midterm perspective.

As for Iran, these sanctions seem to be an attempt by the United States to overcome an inability to knock down the nuclear deal — the Joint Comprehensive Plan of Action (JCPOA) — in a direct way. In a broader context, the sanctions are meant to send a message to Tehran that Washington still interprets Iran’s policies in the region as subversive — and the Trump administration’s attempts to derail the JCPOA follow the same line. The sanctions act refers to Iran’s destabilizing role in the region, ambitions in developing its ballistic missile program and infringement on human rights in the country — the "sin list," similar to that before the JCPOA. Thus, in a very rough comparison, claims against Iran and Russia will look alike: human rights violations and regional and extra-regional ambitions backed up by military power or an ongoing commitment to develop it. Moscow has already given its first response by forcefully downsizing the American diplomatic corps in Russia. Meanwhile, the Iranian parliament is considering a bill that would significantly increase (by about $600 million) funding of the Islamic Revolutionary Guard Corps (IRGC), the main facilitator of all those activities for which Iran is blamed.

Naturally, Iran observes the effect of sanctions on Russia but also notices the unhappy voices in Europe blaming the United States for not consulting its European partners, even though their trade relations with Moscow are going to be affected. In turn, Iran claims the new sanctions violate the letter and spirit of the JCPOA, while the agreement itself, reached by Iran and six world powers — the United States, Russia, China, Britain, France and Germany (P5+1) — from Tehran’s viewpoint was an invitation for the European players to return to mutual projects.

It appears that while mulling over its own options, Tehran is looking forward to Moscow’s reaction. Will Russia stop seeking another "doomed-to-fail" reset with the United States and stand alongside Iran to enhance mutual military capabilities and pledge stronger commitments by the new "axis of resistance" to world arrogance? About two months ago during a Friday prayer, Mohammad Saudi, an imam in the Iranian city of Qom, called on Iran, Russia and North Korea “to give a consolidated response to the US sanctions.”

But Moscow is unlikely to support Iran’s bellicose attitude, expressed in statements such as the one IRGC commander Mohammad Ali Jafari made in July. “Before imposing the sanctions," he said, "America [should] clear its bases within a 1,000-kilometer (620-mile) radius around Iran.” Moscow so far has tried to maintain diplomatic responses. Besides, the different nature of the sanctions may provoke Iran to adopt an even more militarized attitude, but Russia’s priorities will be economic resistance and a search for new sustainable partners or ways to bypass the economic sanctions.

It looks like the countries will continue to explore opportunities beyond bilateral military cooperation, paying visits to each other’s capitals and sending respective delegations to one another. Putin and Iranian President Hassan Rouhani discussed common issues by phone Aug. 14, predicting that Russia and Iran would be developing stronger ties soon. The countries again reiterated their intentions to lift visa restrictions when Russian Ambassador to Iran Levon Dzhagaryan brought a delegation of Russian businessmen to the Iranian region of Kermanshah in August. On the same occasion, the ambassador again brought up the close partnership between Moscow and Tehran regarding Syria, where the “blood of Iranians and Russians is being spilled next to each other.”

Though pondering the sanctions’ unifying drivers is an entertaining intellectual exercise, there’s little evidence that they will evolve into a strategic relationship.