Israeli Prime Minister Benjamin Netanyahu and Russian President Vladimir Putin have developed a surprising rapport and unexpected coordination between their countries on Syria. 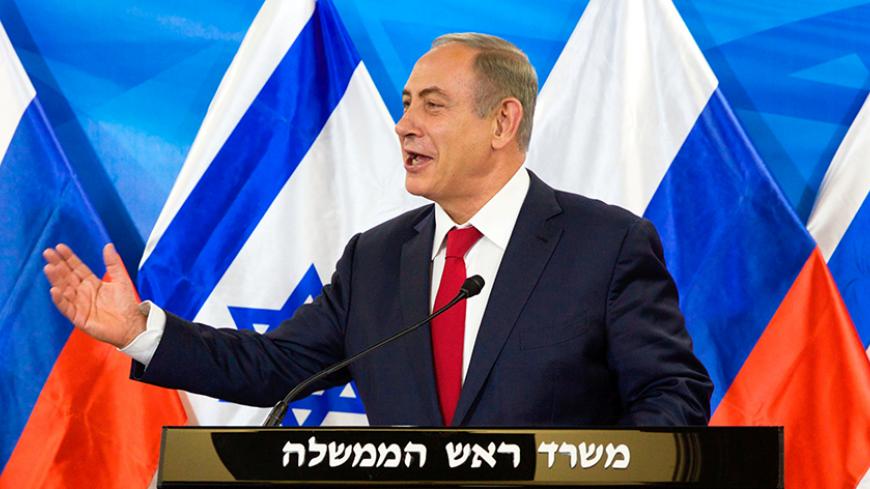 Israeli Prime Minister Benjamin Netanyahu leaves March 9 for Moscow, where he will have a quick meeting with Russian President Vladimir Putin. Netanyahu will depart Israel in the morning and return a few hours later, immediately after his talk with Putin. Sources close to Netanyahu say that he had asked for the meeting, the fifth between the two men in little over a year, to discuss developments in Syria, where Moscow's military presence has made the Russian Federation Israel's new neighbor.

Military sources keeping tabs on security coordination between the Israel Defense Forces (IDF) and Russia stress that so far, relations can be characterized by a level of coordination that appears to be perfect. Nevertheless, as in any relationship, it is important to constantly work on it instead of taking it for granted. In this regard, Netanyahu gets compliments from Israel's high-ranking military and civilian echelons.

No one interviewed claimed that Israel had anticipated how intensely Russia would be involved in Syria or the level of coordination that could be reached between Moscow and Jerusalem, particularly given that Putin is acting in Syria as if he owned the country. Nevertheless, a senior Israeli official intimately familiar with ties between Russia and Israel who spoke to Al-Monitor on condition of anonymity emphasized that Moscow's involvement and coordination were “an expected surprise," but added, “Once it happened, we were able to explain it.”

Israel's ongoing success in securing its strategic needs given the Russian presence in Syria can be attributed to three factors. First and foremost is the respect that Putin has for the Jewish people in general and the State of Israel in particular. The Israeli source could not stress this enough, remarking, “Putin is the most philo-Semitic Russian head of state ever.” He loves and admires the Jews, said the source, and he isn't afraid to express it. Putin often used to talk about a Jewish family that had lived near his parents' home and how, when he was a boy, he would eat and study at their table.

The second factor is the good interpersonal chemistry between Putin and Netanyahu. During Netanyahu's many years in office, he has made a point of fostering good relations with Russia, as have all other Israeli prime ministers since the collapse of the Soviet Union. The Israeli official pointed out, however, that while the other prime ministers visited Russia and were received with great respect, the personal bond that has developed between Netanyahu and Putin is unique. “Whenever the prime minister calls, Putin answers,” he said. “There has never been a case where we asked to set up a meeting for Netanyahu and the Kremlin didn't offer us a date immediately.”

One example of this bond is the way Putin hosted Netanyahu and his wife, Sara, last June, when they paid a visit to Russia to celebrate the 25th anniversary of the re-establishment of diplomatic relations. The Israeli source noted in amazement that Putin devoted eight straight hours to hosting Netanyahu, stressing that even the Russian president's advisers were hard pressed to believe it. “Putin joined Netanyahu for a special performance at the Bolshoi Theater, and when the show was over, he continued on to a reception hosted by the Israeli Embassy,” the source said. “The two leaders sang a song together, and Putin agreed to pose for selfies with any of the guests who asked, and there were lots who did.” The two leaders are happy to show their fondness for one another and speak with the kind of frank honesty that is rare to find in international relations. “They know how to talk to each other, and this helps benefit each of their mutual and national interests.”

The third factor in the relationship is strategic. The close ties that have developed between Israel and Russia are based, first and foremost, on trust. Both parties know they will not agree on everything. The Russian rule is as long as you don't deceive us, we won't deceive you. It is clear to the Russians, the Israeli source said, that strikes in Syria attributed to the IDF have never been about them. Rather, they have targeted forces that pose a risk to Israel’s security. The Russians are willing to accept that the weapons systems they provide to the Syrian army and that Syrian President Bashar al-Assad then transfers to Hezbollah will be destroyed by Israeli Air Force jets, so the Syrians claim. They do not understand Israel's sensitivity to attacks to the extent that a response is required whenever a weapon is misfired in its direction or a rocket crosses the Golan Heights, but they respect it, as long as they are kept informed, and everything is coordinated with them.

It is obvious to the Russians that the United States is Israel's No. 1 strategic ally, even if it sometimes seems as if Netanyahu would have preferred the Russians' pragmatic approach to the Palestinian issue over the American approach, or at least that was the case until Donald Trump entered the Oval Office.

Putin, like all his predecessors in the Kremlin, always makes sure to vote in favor of the Palestinians and against Israel in the United Nations Security Council. On the other hand, however, never has he hassled Israel about its policies. As the head of an enormous country with a 15% Muslim population, it is important for Putin that Israel reach an arrangement with the Palestinians. Nevertheless, all of the concerns he has raised about Israeli actions are practical and pragmatic. He has not raised moral issues concerning human rights. So, Netanyahu accepts Russia's UN voting patterns for what it is, while appreciating the way Moscow deals with it in other regards.

From this, Putin looks like someone who would be interested in a “deal” between Israel and the Palestinians, the kind agreed to by both parties. This is somewhat in line with Trump's approach laid out during the Feb. 15 press conference with Netanyahu at the White House. Yet despite the statements of friendship and affection that the new US president showered on Netanyahu and Israel, the Trump administration's actual foreign policy remains a complete riddle. No one knows what Trump plans to do in Syria, while the relationship between his inner circle and Russia is also unclear.

Another round of talks to resolve the Syrian conflict will be held later this month in the Kazakh capital of Astana. Thus far, the talks have received limited press coverage in Israel, even though they could result in a permanent Iranian presence in Syria, a strategic red line as far as the Israeli government is concerned. The rare personal chemistry between the Israeli prime minister and the Russian president has so far managed to maintain a dialogue focused on the two countries' interests, but also one based on mutual respect, trust and admiration. This week, Netanyahu heads to Moscow to keep the dialogue alive.