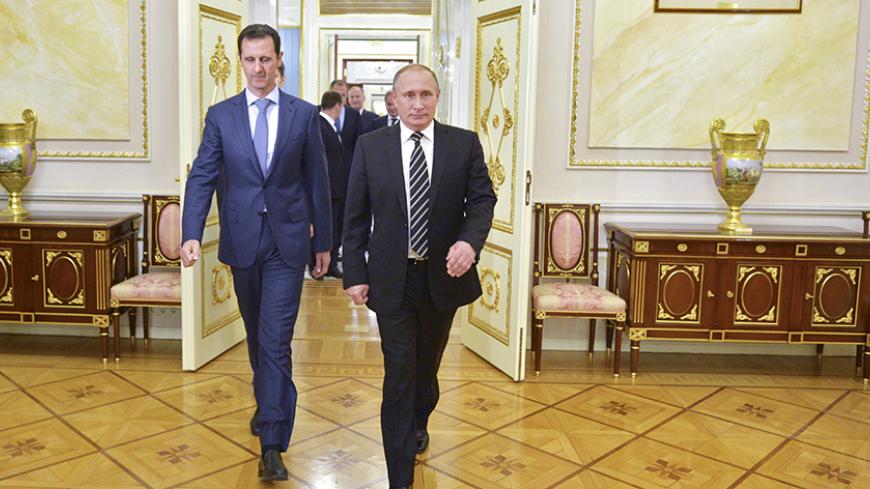 According to prevailing Israeli assessments, there is no expectation that the Assad regime will fall in the foreseeable future. In addition, Israeli experts believe that Syrian President Bashar al-Assad has completed the task of securing the survival of the Syrian heartland, that is, having a government-controlled corridor based in the capital of Damascus that climbs north to Alawistan (the Alawi enclave in Latakia) to the port city of Latakia, with the cities of Aleppo and Homs also in his hands. Now he is attempting to spread his reach to Deir ez-Zor.

Over the last year, there has been a clear evolution in the map of shattered Syria. The Syrian heartland under Assad's control has been growing and expanding at a steady pace, while those areas under rebel control have been shrinking consistently. Even those territories under Islamic State control have been gnawed away quickly. Israeli experts estimate that the war in Syria will continue into the foreseeable future, but that the balance of power at this point clearly favors Assad.

In Israel, those territories under Assad's control are now known as Assadistan. This is a new, narrower, shrunken Syria. It may be much smaller than the historic Syria, but nonetheless, it is here to stay. There is, however, one caveat: "Without [Russian President Vladimir] Putin, there is no Assad," as one senior Israeli expert told Al-Monitor, on condition of anonymity. "The one prerequisite for Assad's survival in power is Putin's goodwill."

A senior Israeli source told Al-Monitor on condition of anonymity, "The way that Putin pushed the United States out of the Middle East and became the dominant power in the region will be studied one day in schools of strategy." Putin's adventurism in dealing with the Obama administration has already been covered here. The fact that, in the end, President Barack Obama never attacked the chemical weapons systems in Syria contributed significantly to Russia's transformation into the dominant power in the region and to Assad's survival. Putin had recognized the time corridor connecting the Obama and Trump administrations as a weak link where he could drive a wedge and establish facts on the ground before the new administration could develop a new position and approach.

"Pay close attention to what is happening here," one Israeli expert told Al-Monitor on condition of anonymity. "President Donald Trump was inaugurated on Jan. 20, on a Friday. No one works in Washington on Saturday or Sunday. On Monday, Jan. 23, Trump woke up in the morning with the International Conference on Resolving the Conflict in Syria well underway in Astana, the capital of Kazakhstan."

That conference was initiated by Putin. The guests of honor, apart from Russia, were the Iranians and the Turks. Putin has long been building closer ties with President Recep Tayyip Erdogan of Turkey, while just this week, he offered President Hassan Rouhani of Iran a warm welcome to Moscow.

From his very first day on the job, Trump has discovered that he is in no way relevant to anything involving Syria. "As of now," a senior Israeli source told Al-Monitor on condition of anonymity, "the Americans are doing Putin and Assad's work in the north, facing off against the Islamic State, and they are also helping the Kurds. This lifts an enormous headache from Assad, allowing him to focus on what is happening in those specific regions that really are important to him. That is where his fate will be determined, and the person to determine that fate is Putin, with the help of the Iranians and Hezbollah."

Israel is maneuvering with extreme caution in this tangled situation. It is attempting to show determination, but also serious concerns. An earlier article here covered the Russian response (summoning the Israeli ambassador in Moscow to the Kremlin for a clarification talk) to an attack by Israel recently in Syrian territory, during which Israel was forced to deploy its Arrow 2 missile defense system to shoot down a barrage of anti-aircraft missiles that the Syrians fired at Israeli aircraft.

Israel claims that the Israeli air force's freedom of action over Syrian airspace has been maintained and is not at risk. The assessment is that the Russians felt pressured and acted for two reasons. First, the location of the target attacked by Israel in the Tadmor region was close to the position of a Russian force. While that Russian force was in no imminent danger, it could see and hear the Israeli attack, which became a source of some sensitivity. The second reason is that unlike previous instances, this time Israel assumed responsibility for the assault by virtue of its deploying a battery of Arrow missiles. That Israel has come out of the closet (about attacking targets in Syria) has put the pressure on Putin. Everyone in the region had their eyes on Putin: the Iranians, Hezbollah, Assad, the rebel groups, the Turks, and just about everyone else. Everyone asked themselves how the local sheriff would respond. Some of these players also pressured the Russians to put an end to Israel's unrestrained activity in the air.

The Russian reaction is seen around the world as a minimal response, to "fulfill its obligation." At the same time, Israel does not know what Putin is thinking and how he will respond the next time. What will happen if he suddenly changes his spots and informs Israel unequivocally that his air force will shoot down any Israeli jet that penetrates Syrian airspace? No one in Israel, from Prime Minister Benjamin Netanyahu on down, knows the answer to that question.

On the one hand, Israel is determined to maintain its red lines on Hezbollah with the utmost meticulousness. It will do whatever it takes to prevent the transfer of any weapons to Hezbollah that could upset the balance of power (including advanced anti-aircraft missiles, Yakhont P-800 Onyx missiles, heavy surface-to-surface precision missiles and chemical weapons). On the other hand, it is quite obvious that Israel has no interest in getting into a clash with the Russians, even if it remains local.

Whenever the issue is raised before some Israeli general or other, the response usually ends with the following humorous riddle. "Where does an 800 kilo gorilla sit?" The answer is, "Wherever it wants" (with the source of the metaphor being the Russian superpower acting any way it likes). This is precisely the reason why Israel needs the US administration more than ever now. Jerusalem hopes that Trump will not allow Putin to continue roaming through Syria with stoic tranquility as the final referee and judge. The involvement of elite US forces, who have landed in northern Syria and are now helping the rebels and the Kurds, is very encouraging to Netanyahu.

In February, at their Washington meeting, Netanyahu hoped that Trump would not touch the Palestinian issue, preferring instead to charge ahead (for Israel's benefit) on the Syrian-Iranian issue. So far, the situation has been the exact opposite. Trump's surprising activity on the Palestinian front is disconcerting, while he remains rather lethargic on other issues. Netanyahu will try to do whatever he can to spur Trump into action in Syria, while pushing for a more lethargic attitude toward Ramallah. As of now, the chances of this succeeding are so low that Netanyahu prefers to push for early elections.