Has Rouhani achieved his goals for Iranian economy?

With his first term coming to an end in the next few months, it is time to assess President Hassan Rouhani’s management of the Iranian economy. 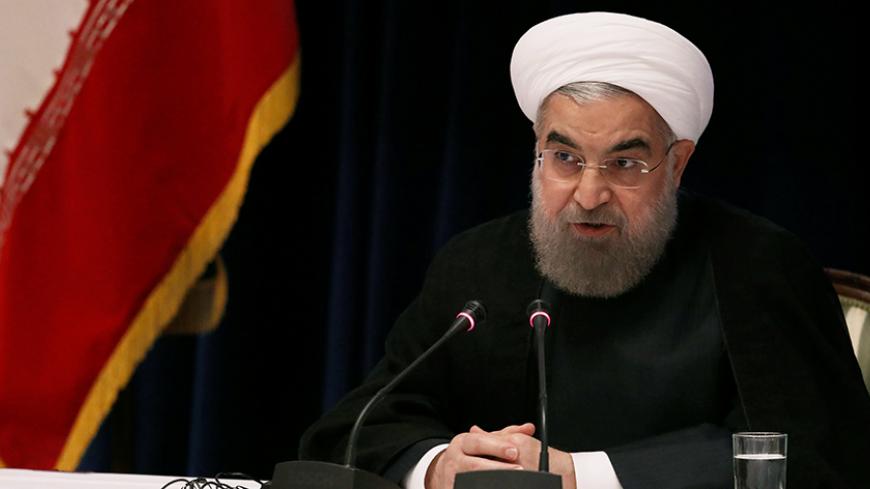 Iranian President Hassan Rouhani’s first term in office will come to an end in a few months, and it is time to evaluate his administration’s economic policies during the past four years. When Rouhani ran for president in 2013, he promised to inject new impetus into the Iranian economy, which was suffering from eight years of misguided populist policies under his predecessor, Mahmoud Ahmadinejad, as well as from external sanctions.

Rouhani himself has recently defended his government's economic performance, especially the fact that inflation has been contained.

One of the qualitative aspects that Rouhani pointed to was the “return of tranquility” to the Iranian economy. A quick look at some of the key indicators underlines that the government has indeed managed to improve overall economic conditions.

Inflation, which hovered around 40% in 2013, came down to 7.5% in 2016. As such, the government has achieved its own stated goal of single digit inflation. Though unofficial inflation figures (i.e., consumer price index calculations based on alternative baskets of goods) show a rate of around 10%, the fact is that inflation trends have been positive. This achievement has been a consequence of a disciplined monetary policy, including a phased reduction of bank interests and also a better control of money supply as well as relative stability in foreign exchange rates. All mentioned factors are an indication of a more technocratic approach to economic management. The likely realization of single-digit inflation in 2017 would mean that for the first time in three decades, Iran would experience single-digit inflation two years in a row.

Furthermore, economic growth has gone from minus 5.8% in 2013 to an estimated 7% growth in 2016. The main engine behind the growth pattern of the past 12 months has been the doubling of Iran’s oil exports in the aftermath of the implementation of the Joint Comprehensive Plan of Action (JCPOA). The Rouhani government has managed to successfully increase oil production and also recapture lost export market shares in global energy markets. In addition, the post-JCPOA opening of the Iranian market to foreign investment has generated an impetus that is best reflected in the fact that in the Iranian year, which started on March 20, 2016, $9.5 billion in foreign investment has been absorbed.

Despite these positive developments, the government’s performance in creating new jobs has been unsatisfactory. Undoubtedly, unemployment remains the most significant challenge of the Iranian economy by far. Based on the latest official unemployment figures published in December, overall unemployment stood at 12.7% in the summer of 2016. Though the indicator shows an improvement compared with the summer of 2013 (14.4%), the current level of unemployment can be seen as critical, especially when one considers youth unemployment of 31.9%. Evidently, the unemployment situation is a direct consequence of the country’s young demography, but the government needs to do more to improve the business climate to a degree that it facilitates domestic and foreign investment.

In fact, one area in which the Rouhani government has failed to produce satisfactory results is the improvement of business climate, especially the fight against corruption. In December 2014, Rouhani declared corruption as a national security threat and promised to fight it. However, progress has been minimal and many economic actors complain of new and unprecedented levels of corruption in the economy. In 2016, Iran was ranked 120th in the “Ease of Doing Business Index,” which is unacceptable for a country trying to attract major investment and create jobs.

One negative consequence of the deficient business climate is lack of efficiency, which has been another weak point in the track record of the Rouhani administration. In fact, the government has stated that efficiency growth would contribute 2.5% of the planned 8% annual growth in the 6th Five-Year Plan (which starts March 21). Nonetheless, there is no evidence that efficiency will grow at the planned level. The government has failed to address some of the issues that pave the way for higher efficiency: These include subsidies, lack of competitiveness, dominance of semi-governmental entities in some economic sectors, opaque tender procedures and so forth.

Another sector that requires serious government attention is banking. Experts agree that the majority of the Iranian banks are overstretched. Toxic assets, including bad loans, make up about 40% of the bank assets in Iran. The situation is dire, and a number of Iranian banks are on the verge of bankruptcy. As such, the government will have to help the banking sector and pave the way for the merger of a number of banks in order to secure their survival and also prevent a major financial crisis. In a move to ease the financial tensions in banks, the government introduced the “Law to Remove Barriers to Production,” which tasked banks with selling up to 33% of their immovable assets; however, a recessionary property market has complicated the situation and has left banks with a tense financial position.

In the meantime, economic concerns — and especially unemployment — remain as key issues in the country’s political discourse. In his speech to the Assembly of Experts on March 8, Supreme Leader Ayatollah Ali Khamenei complained about the economic conditions and said, “If all crucial tasks with regard to the Economy of Resistance had been carried out, Iran would have been able to see a tangible difference in the country's economy and people's lives.” Khamenei pointed to broad areas of concern such as production, employment, recessionary developments, smuggling, as well as imports and exports. Nonetheless, experts believe that on balance, the Rouhani administration has produced positive results considering the depth of the economic crisis that the Ahmadinejad government had generated.

The assessment of the International Monetary Fund (IMF) has also been positive. In fact, the latest IMF Report says, “The Iranian economy has had an ‘impressive recovery’ following sanctions relief last year, though uncertainty regarding the fate of the nuclear deal and relations with the US threaten to undermine it. … Growth is expected to be 6.6 percent in the calendar year ending March 20, reflecting the rebound in oil production and exports, and stabilize at 4.5 percent over the medium-term as the recovery broadens.” The report also highlights the government’s ability to maintain inflation in single digits and stabilize the foreign exchange market.

There have also been unexpected positive impacts. For example, tourism has experienced a welcome growth in Iran. Analysts agree that the emerging growth in the tourism sector will create needed jobs and contribute to economic growth. The growth in tourism has also led to massive domestic and international investment in the construction of hotels and other needed infrastructure.

All in all, the Rouhani government’s economic policies have generated some positive results, but the economy is in need of bold initiatives to improve the business climate and pave the way for greater private sector activity. Evidently, some of the needed changes will also require political, legal and structural reforms, which may be an uphill challenge that Rouhani will face in his potential second term as president.