Was it a win or a loss? Checking Rouhani's midterm economic scorecard

Halfway into his term Iranian President Hassan Rouhani has done well in terms of fulfilling his economic promises — but much remains to be done. 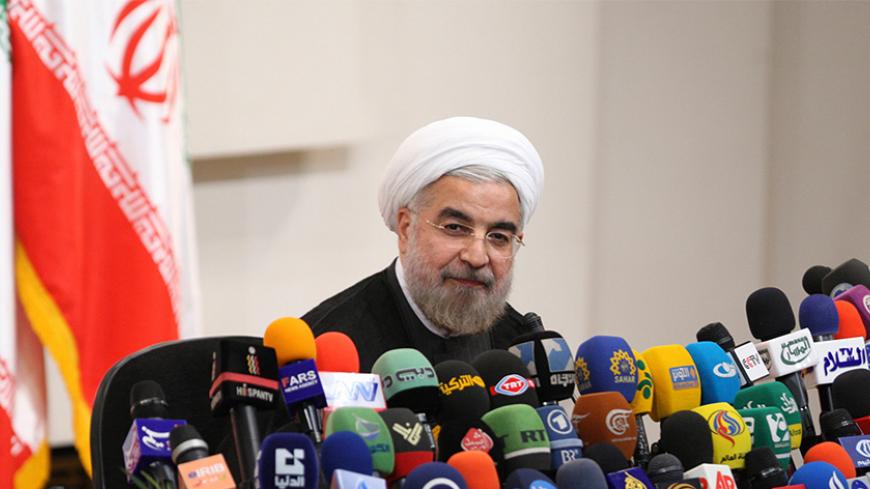 Halfway into his term, it is time to evaluate the performance of Iranian President Hassan Rouhani’s economic policies. This is particularly relevant since the economy has consistently been highlighted in Rouhani’s discourse over the past two years.

One of the government’s key achievements has been the reversal of the country’s economic decline and the reintroduction of an acceptable growth of the gross domestic product, which will be close to 4% this year. Indeed, the World Bank estimates that the Iranian economy will grow by 5% in 2016. This is far from what Iran requires — 8% real annual growth is needed just to keep unemployment where it is — but, nonetheless, an important shift. Considering that Iran experienced a 5.8% economic decline in the year ending March 20, 2013, it is a major achievement to have returned to a growth scenario. Experts now agree that the pace of growth will accelerate once sanctions are lifted in the course of 2016.

Inflation and the rial

In 2013, when Rouhani took office, inflation had peaked at 42% and the outlook was dim due to the Iranian currency’s massive loss of value. Rouhani’s election reversed the worrying trend in the free-market exchange rate. It also precipitated a rial appreciation not seen since the end of the Iran-Iraq War in 1988. Indeed, the free market rial rate against the US dollar went from 38,000 on the day before Rouhani’s election, to about 29,000 on the day after the election — i.e., a 30% appreciation. Ever since that massive shift, the free market rate of the Iranian rial has remained relatively stable, and it currently stands at about 33,900 to the US dollar. Considering the 15% annual inflation since mid-2013, the rial’s stability over the past two years means that the overall purchasing power of the Iranian currency has improved since Rouhani took office.

Apart from the exchange rate stabilization, more sophisticated economic management as well as the positive impact of the nuclear negotiations have helped the government contain runaway inflation in the past two years. Annual inflation in 2013 stood at 35%, dropped to 16% in 2014 and is expected to go below 15% in the current year. Though government officials have envisaged a single-digit inflation rate by March 2016 — the beginning of the next Iranian fiscal year — experts agree that this would be difficult to achieve. Nonetheless, the government’s performance in managing inflation has been very positive.

Rouhani’s top priority since taking office has been to create jobs and reduce unemployment. There is no doubt that the overall employment trends are positive. Though the actual impact on employment statistics has been negligible — official unemployment has dropped from 10.4% in 2013 to about 10% in 2015 — there is a new momentum, especially since the announcement of the nuclear deal with six world powers. However, as discussed by Al-Monitor last year, the core issue in Iran remains underemployment, and the government needs to address the existing mismatch between university graduates and available jobs. Such an effort would require investment in modern industries to absorb a larger number of experts into their own fields. Incidentally, according to the latest statistics on industrial activity, in the first quarter of the current Iranian fiscal year — which began March 21 — the issuance of new licenses for industrial activity declined by 9% compared with the same period in the previous year. The employment impact of such new investments fell by 14% compared with the same period last year. One may argue that anxiety about the outcome of the nuclear negotiations led to a drop in new industrial investments. However, it is more likely that shortcomings in financing solutions have pushed down new investment. Evidently, improvements in employment conditions will depend on a number of other factors, which will be discussed below.

In his Nov. 26, 2013, report to the nation — marking his first 100 days in office — Rouhani declared that the improvement of the country’s business climate was a top priority.

While his government has introduced some economic reforms, their actual impact has been minimal. According to the World Bank, in terms of “ease of doing business,” Iran ranked 130th out of 189 countries in 2014, compared with position 132 in 2013. Evidently, one cannot fully blame the Rouhani administration, as the weak link in the Iranian business climate remains the judiciary, which is not controlled by the executive branch. As such, Rouhani ought to engage in dialogue with the judicial authorities — potentially involving the supreme leader — to introduce needed reforms in the judiciary.

Changes in the regulatory environment are also urgently needed. Cumbersome processes to secure or extend business licenses are not only damaging to businesses, but also pave the way for corruption.

Indeed, corruption continues to be the biggest impediment to healthy growth in private sector activity. As discussed extensively by Al-Monitor, the government will have to address a comprehensive set of legal, political and structural issues to ease the concerns of the private sector. Considering low oil prices and the government’s dependence on the private sector to create new jobs, this should be the top priority for the Rouhani administration.

The Rouhani government’s efforts to attract foreign investment have not yet borne fruit. In fact, according to the latest United Nations Conference on Trade and Development (UNCTAD) World Investment Report, foreign investment declined by 31% in 2014 compared with 2013. Of course, the anticipated lifting of sanctions will pave the way for an increase in foreign direct investment. However, it is clear that the government will need to do more with regard to improving legal, administrative and operational frameworks in Iran.

With the current low oil prices, the government will not only depend on the domestic private sector and international investors, but it will also have to develop new concepts for project financing. The recent plan to issue a major domestic bond could be seen as a precursor of the issuance of international bonds, which Iran may contemplate once banking sanctions have been lifted. Such policies will partly absorb Iran’s hard currency reserves, which will also be made available after the lifting of sanctions.

All in all, the midterm performance of Rouhani’s economic policies is acceptable, especially considering that he inherited an economy severely undermined by mismanagement, corruption and sanctions. Now, considering the positive outlook supported by the imminent lifting of sanctions, Rouhani’s attention should shift to fighting corruption on all levels and improving the business climate to pave the way for needed domestic and foreign investment.