Despite its drastic cut in inflation to single digits for the first time in years, reports predict that Iran will see a return to its usual high inflation rates. 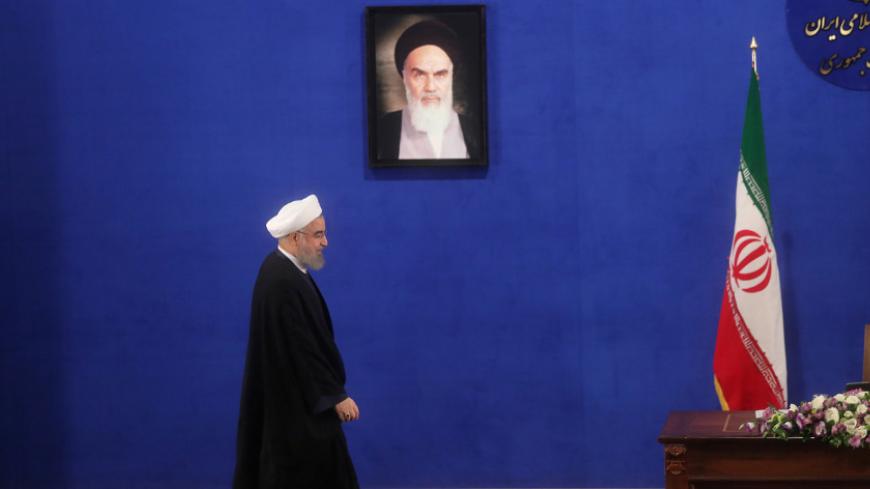 Iranian President Hassan Rouhani arrives for a news conference in Tehran, Iran, May 22, 2017. - TIMA via REUTERS

In terms of economic management, containing inflation has been one of the most significant achievements of Iranian President Hassan Rouhani’s first term in office. The Rouhani administration managed to reduce inflation from close to 40% in mid-2013 to 7.2% in the Iranian year ending on March 20, 2017. As a result, Iranian politicians have been promising a single-digit inflation rate over the next few years that would help stabilize the country’s economy.

However, the first quarterly report on inflation has raised eyebrows. According to the latest report of the Central Bank of Iran (CBI), inflation in the 12-month period ending June 21 was 10.2%, and inflation in the last month was 0.3%. Neither of these figures are alarming — indeed, the Majles Research Center (MRC) had predicted that inflation in the current Iranian year would reach 10.9%. However, the question is whether a sustained single-digit inflation rate is realistic in the Iranian economy. Iran has experienced such low inflation only twice (including last year) since the end of the Iran-Iraq War in 1988 and the country has lived with inflation above 10% for most of the past three decades. This article will look at the determinants that will influence inflation in the Iranian economy and how they will interact in the next few years under Rouhani’s new government.

First and foremost, the key indicator is the money supply. Iran’s cash-based economy provides a major challenge in reducing inflationary pressure. Experts agree that in the past four years, three CBI policies have helped contain inflation in Iran: managing the money supply, maintaining relative stability in the foreign exchange rate and gradually reducing bank interest rates from their peak of 26% to some 15% currently. However, different pressures could expand the money supply if the CBI fails to extensively promote non-cash transactions such as online and mobile payment methods. At the same time, an MRC study following the growth of the base money supply in the past two years leads to a prediction that inflation will rise in the current Iranian year.

Evidently, in addition to a favorable money supply growth, interest rates need to be reduced further to achieve a single-digit inflation rate. But the CBI needs to develop a balanced approach so as not to cause a sharp reduction in bank deposits. In 2015, CBI Governor Valiollah Seif said the difference between bank interest rates and inflation should not exceed 2 percentage points. This means that single-digit inflation of 9% would require interest rates around 11%. Experts and politicians alike agree that such interest rates would gradually compel many Iranians to withdraw their deposits from banks and seek other options such as gold, hard currency or speculative investments in property and stocks. To avoid a massive migration of bank deposits, the CBI has to design a gradual process accompanied by changing perceptions about investment yields in other sectors.

However, there are two opposing forces within the business community. On the one side, high bank interest rates lead to disincentives for investments in new enterprises. The fact is that very few business concepts can beat the 15%-18% tax-free annual return in the Iranian economy that interest can provide. Therefore, some of the political stakeholders believe that a reduction in interest rates would lead to more investments in productive enterprises seeking a greater return. On the other hand, banks and financial institutions would be deprived of deposits if bank interest rates sink to around 10%. One risk would also be that many deposits might flow toward less regulated or unregulated financial institutions that offer higher interest rates.

Another challenge to the government is finding the right balance between containing inflation and stimulating the economy. Indeed, the government still plays an important role as a main investor and job provider in the economy, hence the need to use government funds to stimulate the economy and create jobs through infrastructure investment, for example. This phenomenon usually leads to budget deficits, which are in themselves a cause of inflation. Consequently, sustaining low inflation will clash with the government’s need to create jobs and promote economic growth.

There also is the issue of what to do about the exchange rate between the rial and major currencies. On the one hand, the Rouhani government has committed to maintaining a certain degree of currency stability to promote investment. On the other hand, lower inflation can make Iranian exports less competitive in the international market. Consequently, a degree of currency devaluation will be needed to address the concerns of Iranian exporters and their wish to maintain export markets. Seif said managing CBI’s international hard currency reserves and sustaining stability in the foreign exchange rates will be the most “sensitive and complex” responsibilities of the CBI.

Last but not least, the government still needs to correct energy prices upward to fully implement the subsidy reforms that were initiated in December 2010. The challenge with implementing the third phase of subsidy reforms has been discussed in Al-Monitor previously. What needs to be appreciated now is the fact that low fuel prices are costing the government indirectly through unnecessarily high domestic energy consumption that eats into the country’s oil and gas export potential. As such, it is expected that as soon as the next government is in place, plans will be drafted for the final stage of subsidy reforms, which will include hikes in fuel prices.

The underlying inflationary pressures (money supply, subsidy reforms, budget deficit and currency devaluation) will continue to pressure the Iranian economy. All these factors also have a certain degree of interdependency. In addition, key players in the country’s economy expect a certain amount of inflation, hence even leading to a psychological component for there to be double-digit inflation. Therefore, despite all the efforts of the Rouhani government, it is difficult to see single-digit inflation being sustained over the next few years. This does not mean a return to very high inflation, but it is safe to expect inflation at around 11%-12% and a base bank interest rate around 13%-14% until the economy finds a new equilibrium, especially with regard to expectations for inflation as well as investment yields.