Although the Rouhani administration has made great strides in terms of stabilizing the Iranian economy, it could soon be witnessing the return of double-digit inflation. 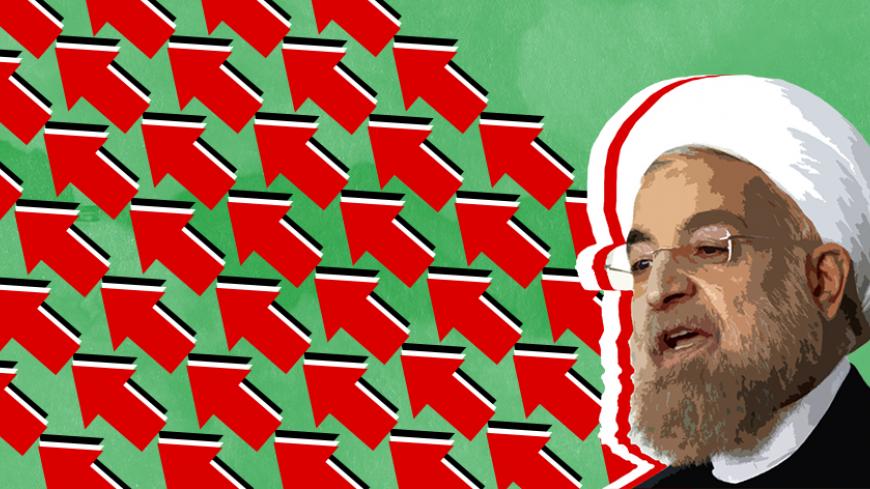 The Central Bank of Iran (CBI) is stepping up its efforts to reform the country’s ailing banking system amid fears that inflation may pick up again. The monetary regulator is “serious” about the reforms, CBI Gov. Valiollah Seif said on the sidelines of a Cabinet meeting May 31. He added that efforts to control inflation will continue and that his bank will try to bring interest rates closer to inflation.

The baseline lending rate is currently 18%, while banks are offering a maximum of 15% for savings accounts. These rates are high for an economy that the government seeks to grow and stabilize. The implementation of banking reforms, which would entail fundamental changes in laws and outlook, requires close cooperation among President Hassan Rouhani’s administration, the CBI, the judiciary and parliament. “Without a consensus among government branches, the Central Bank will have no chance of getting reforms done,” Seyed Ali Madanizadeh, an academic at Sharif University of Technology, was quoted as saying by economic weekly Tejarat-e Farda on May 6.

The Rouhani administration has made great strides in the past four years in terms of tackling inflation, bringing it down from 35% in the Iranian year ending in March 2013 to as low as 9% in the Iranian year ending in March of this year. Now economists warn that ballooning expectations of more economic growth may press Rouhani to adopt expansionary policies in the coming years, jeopardizing his achievement of having brought down stubbornly high inflation.

Rouhani has increasingly been blamed in recent months for his “failure” to improve economic conditions for a majority of Iranian households. Though the recession is technically over, commercial banks still struggle to raise fresh capital while the country’s young debt market is still too weak to seriously finance businesses. Thus, printing money could be an easy way for the administration to get itself out of an unpleasant situation. In this vein, it should be noted that hard-liners are already beginning to celebrate the likely defeat of the moderate administration in the economic arena. Tasnim News Agency, a staunch critic of Rouhani’s economic policies, warned in a May 29 report of a looming currency crisis, predicting the return of double-digit inflation.

Administration officials, however, have tried to downplay such claims, arguing that inflation will only increase by about 1 percentage point by the end of the current Iranian year. Hossein Mirshojaian, the deputy minister of economic affairs and finance, told the Iranian Labor News Agency on May 19 that average inflation will not top 10% by March 2018. He further acknowledged that the administration will inject money into some parts of the economy but noted that “those sectors have a high capacity to create jobs.”

This comes as there are reports that the Central Bank is pushing for further cuts in the baseline interest rate — an indication that monetary officials have a strict plan to keep average annual inflation at 10-11% in the current Iranian year, though year-on-year inflation might go even higher for a few months.

Curbing inflation was a central policy of Rouhani’s first-term administration, and it seems as if it will remain a major policy goal in his second term, too. The president announced in an economic statement published by Eghtesad News website May 13 that he plans to maintain his achievement of single-digit inflation in the coming years. Yet some analysts, including Madanizadeh, are warning that any failure to implement banking reforms would force the Central Bank to lend money to banks — a measure that would lead to a jump in money supply and inflation.

Average inflation increased to 9.8% in the second month (ending May 21) of the current Iranian year, with experts expecting it to exceed the psychological 10% level by the third month (ending June 21). Rouhani has kept inflation in single digits for 12 months, but his success in doing so has been mainly attributed to recession-hit, middle-class consumers holding onto their wallets and the administration’s strict monetary discipline in recent years. This is while the country needs structural reforms if authorities expect all domestic markets to remain stable in the long run.

Moreover, the government’s accumulated budget deficit and the growing liquidity could also play major roles in pushing up the inflation rate. The government’s inefficiency, big size and rising expenditures are all blamed for the deficit. Thus, perhaps the most serious challenge facing Rouhani’s second-term administration will be to resolve these issues, which could derail the economy once again if not addressed properly.

On the other hand, if the administration succeeds in controlling its budget deficit and accelerating the economic recovery, the current slow movement of money within the economy could increase. Currently, 45% of the value of bank assets, including properties banks had bought during the housing boom between 2005 and 2012 as well as nonperforming loans, are said to be “out of reach,” meaning they cannot be used for loan purposes. Seif has in recent months stated that banks should generally be lending out 90% of the sum of deposits. Possible access to this “out of reach” capital — though unlikely to happen in a year or so — would mean a significant rise in money supply. Thus, the government needs to come up with an effective solution to channel this currently locked-away money toward industry in a way that there won’t be a sudden torrent of capital movement.

Rouhani will most likely endeavor to find a middle-path solution that can simultaneously breathe life into the Iranian economy while keeping inflation under control. He has in the past two months repeatedly argued that his economic team will only be able to create about 700,000 jobs in the current Iranian year (ending March 2018) — 300,000 less than what the current Five-Year Economic Development Plan (2016-2021) calls on the government to create. This means that Rouhani’s efforts to help drive growth and boost employment will be conditional — with the condition arguably being that inflation must be contained.

Given the major restrictions he could end up facing as a result of efforts on the part of his domestic political opponents, the moderate president is expected to pursue a slow but stable economic recovery in the coming years. In this vein, the key message the Rouhani administration has been trying to communicate — to both consumers and investors — is that the Iranian economy will remain stable as long as technocrats are in office.