With the Iranian economy losing steam, the Rouhani administration is changing tack and adopting a new stimulus package as the nation waits impatiently for sanctions removal. 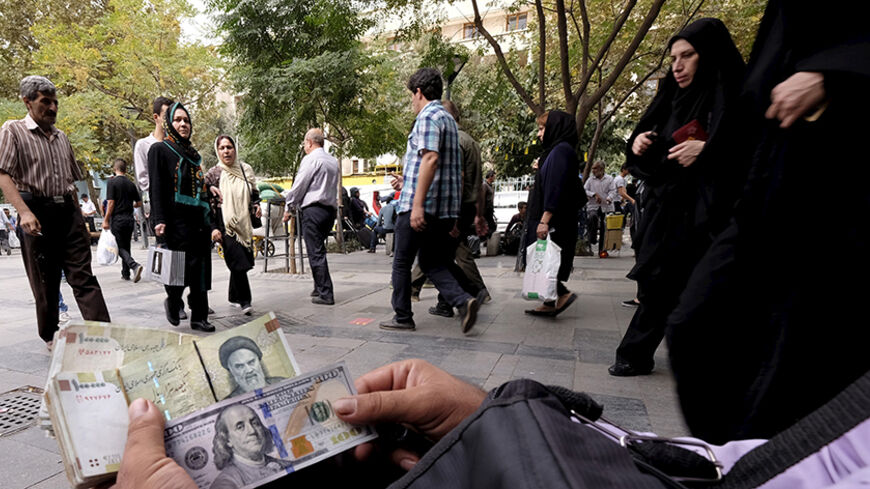 A money changer displays US and Iranian banknotes at the Grand Bazaar in central Tehran, Oct. 7, 2015. - REUTERS/Raheb Homavandi

TEHRAN, Iran — After months of resisting calls for an economic stimulus package, President Hassan Rouhani has finally changed his stance on the matter. This will be the second such short-term plan initiated since he took office in August 2013. The first 18-month plan was aimed at curbing galloping inflation and fighting recession by committing to fiscal discipline. However, the current plan, which is scheduled to last six months, seems to be a shift away from the administration’s central approach of using a contractionary monetary policy to achieve single-digit inflation by March 2017.

Last month, speculation that the Iranian economy has begun faltering again following four consecutive quarters of growth forced four key ministers to write a letter to the president, warning him of a looming financial crisis in the country. Crippling sanctions have yet to be lifted and a credit crunch has already put overwhelming pressure on banks, on which all industry sectors — and even the government — are reliant for project finance. Thus, bitter realities on the ground coupled with pressure from conservative media as well as some figures from inside his own administration appear to have finally pushed Rouhani to give up his contractionary monetary policy, which has so far decreased inflation to 15% from more than 40%.

Chronic inflation has been the root cause of economic backwardness in Iran, and the Rouhani administration took office with determination to confront this issue once and for all, despite criticism. However, the new stimulus package is a shift from Rouhani’s original goals, as it envisages a cut in commercial banks’ legal reserve requirements from 13% to 10% — a move that will certainly increase both the money multiplier and the money base. The Rouhani administration also seeks to inject money supply estimated at 75 trillion rials ($2.5 billion) into development projects to stimulate growth. Critics are now warning that these decisions will reverse efforts to lower inflation to the 14% target by March 2016. In fact, the expanded money supply and other efforts aimed at encouraging the private sector to borrow for projects are likely too little to stimulate the economy — but large enough to ignite inflation expectations. Indeed, the credit set to be released by banks into the Iranian economy “doesn’t address the fundamental factors that have depressed the economy,” argues Mehrdad Emadi, an economist at the BetaMatrix consultancy in London.

A new survey conducted by leading economic daily Donya-e Eghtesad shows that a majority of Iranian economists (86.4%) believe an expansionary monetary policy has no or little impact on growth. Most of the 44 surveyed prominent economists say the main reason for the recession is not the fiscal discipline of past years, with only a minority backing the idea that stimulation of demand will be an effective way to boost growth.

Despite the criticism, administration officials are confident that they will be able to minimize the inflationary impact of their new policies. Minister of Economic Affairs and Finance Ali Tayebnia has said the government is trying to pay part of its huge debt to banks through a debt market, in an attempt to avoid a rise in inflation. This could indeed be the only positive point of the new stimulus package, as government debt can be sold as participatory, sukuk and treasury bonds — all of which are tradable in a secondary market. According to Tayebnia, the aim of the debt market is to liquidate the assets of creditors, paving the way for the central bank to adopt an open market policy. “Our aim is to organize the government debt in a bid to resolve financial straits and achieve the growth targets,” he argues.

The fact of the matter is that the Rouhani administration has not been fortunate enough to prove that continued fiscal discipline would result in the fulfillment of its goals. The global economy has shrunk more than expected this year, affecting the Iranian economy. Furthermore, plunging oil prices and lower international demand for Iran’s mineral products have put more pressure on the national budget, threatening the fragile recovery. On the other hand, the weak domestic consumption of durable goods like cars and home appliances have added to the government’s financial problems. A majority of Iranian consumers are still waiting for sanctions to be lifted to make such purchases, contributing to the weak demand. According to Tayebnia, the administration’s revenues dropped by 6% in the first half of this fiscal year compared to the same period last year, leaving the government in a desperate struggle to keep industries afloat until the end of this Iranian fiscal year, March 2016, when the Joint Comprehensive Plan of Action is expected to be implemented and major sanctions removed.

A couple of weeks before the administration unveiled its new stimulus package, the International Monetary Fund predicted that the Iranian economy will expand by 4.4% in 2016, as Iranian banks resume transactions with global counterparts and multinational companies dare to invest in Iran in the absence of major sanctions. In this vein, the administration’s economic stimulus package may be aimed at buying time until sanctions are lifted. It could also be a maneuver ahead of the crucial parliamentary elections in late February, with Rouhani hoping that his allies and supporters will win enough seats to hold a clear majority in the parliament. Whatever the case may be, the next few months look set to be rocky for the economy — and the administration.