During Iranian New Year speeches, Supreme Leader Ayatollah Ali Khamenei and President Hassan Rouhani painted starkly different pictures of the Iranian economy, which is turning out to be a weak spot for the president’s re-election campaign. 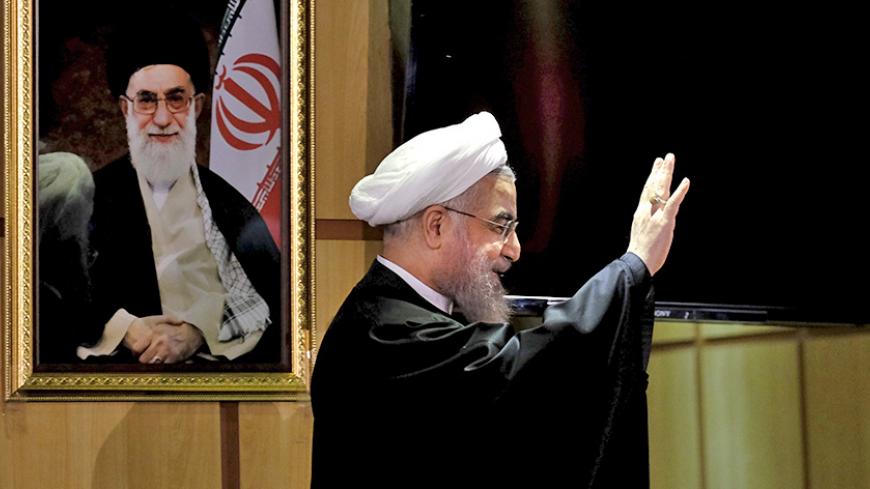 Iran’s supreme leader, Ayatollah Ali Khamenei, who has final say on all state matters, used his most important speech of the year to criticize President Hassan Rouhani and his administration’s economic performance. With presidential elections two months away, Khamenei's criticism opens the door for other conservatives to attack the president on a vulnerability.

The supreme leader's Nowruz (Iranian New Year) speech is similar to the State of the Union Address in the United States and delivered at the shrine of the 8th Shiite imam in the city of Mashhad, the most important site in the country for Iranian Shiites. In his speech on March 21, Khamenei discussed not only the previous year, but also laid out the most pressing issues for the upcoming year. Khamenei also proclaimed that this year, 1396, would be the “Year of Resistance Economy: Production and Employment.” The president is largely responsible for managing the economy, so it is up to the president and his administration to ensure that Khamenei's economic objectives for the year are met.

Half of Khamenei’s Nowruz speech consisted of statements about his concerns and commentary regarding the state of Iran’s economy. Although he acknowledged that there were positive signs, such as economic growth and decreasing inflation, Khamenei also asserted that there are still “many problems,” such as increasing unemployment and low investment, referring to both of them as fundamental problems. He also critiqued the level of the country’s exports, asking the administration to increase it.

Khamenei’s sharpest remarks are perhaps those delivered in a video message posted March 20 in which he says, “I am aware of the people’s situation; therefore, I can sense the bitterness of the people, especially the lower classes, from economic problems such as inflation, unemployment, discrimination, equality and social harms.” His acknowledgment made headlines on a number of conservative websites.

In contrast, Rouhani in his Nowruz speech, delivered via video from the Sa’adabad presidential palace, painted a much rosier picture of Iran’s economy. He said the growth in the economy, decrease in inflation and growth in employment were “incomparable in the last 25 years” of the Islamic Republic. He did not address any economic problems, and he stressed that the positive trends in the economy should continue.

Given the discrepancies between the two speeches and the evident glee among conservative websites in highlighting Khamenei’s critical comments, Rouhani wrote a letter to Khamenei stating that addressing employment and production within the framework of a resistance economy would be on the administration's agenda. He added that Khamenei’s “continuous support” would be instrumental in pursuing those policies.

Regardless of whether Khamenei’s criticisms of Rouhani’s economic performance are fair — see Bijan Khajehpour's objective economic assessment of Rouhani’s nearly four years in office for Al-Monitor — they will undoubtedly serve as fodder for conservatives seeking avenues to attack the Rouhani administration ahead of the elections and to present themselves as better suited to address the economic needs of the country.

Ebrahim Rasisi, a rumored potential challenger to Rouhani from the right, gave a speech March 22 describing how the charitable foundation he manages, the influential and wealthy Astan Quds Razavi, will seek to address poverty. He asserted that the foundation’s policies could help create 2,500 jobs. Meanwhile, the conservative Raja News ran an article echoing Khamenei’s criticisms of the administration’s economic policy, but they were nothing new. Iran's economic performance has been a weak point for the administration. With Khamenei’s speech, however, the criticisms will likely be highlighted more in the next two months, especially by conservatives hoping to prevent Rouhani’s reelection.