Launched in 2015, the "Travel with Shee" initiative organizes monthly workshops in Cairo and Alexandria to encourage young Egyptian women to ignore social, family and religious constraints and go see the world. 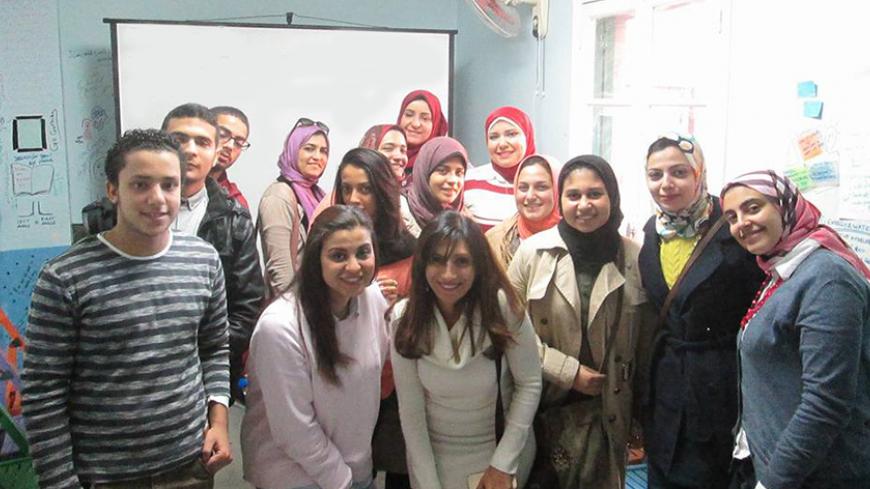 Attendees of a "Travel with Shee" lecture about couch surfing and traveling in Morocco held in Alexandria, Egypt. Posted Feb. 12, 2016. - Facebook/travel with shee

CAIRO — In an attempt to break social and psychological barriers that prevent young Egyptian women from traveling the world by themselves, Shaima Ali, an employee of the Bibliotheca Alexandrina, launched the initiative “Travel with Shee” in August 2015. The platform encourages women of all social classes and ages to inspire other women by sharing their travel stories of trips on their own or with their families.

Ali has been holding monthly workshops in Cairo and Alexandria, attended generally by 30-40 women at a time, where female travelers talk about their experiences visiting foreign places. The talks do not address tourist attractions or local lifestyles, but rather focus on personal experiences and the way the community has dealt with the women upon their return to Egypt.

The majority of Egyptian women who travel alone often face social or religious rejection, under the pretext that it may not be safe, they may be scared abroad and fail to act or protect themselves in a community they are not familiar with, or that Islam requires women to be accompanied by a male guardian while traveling.

In February, Al-Monitor attended the workshop in Cairo and spoke to Ali and other members of the initiative.

Ali told Al-Monitor, “It was unacceptable, even for my own family, that girls travel — even within Egypt. It was a far-fetched dream for me to travel by myself, but I decided to make my dream come true.”

She said, “Julia Robert’s 'Eat Pray Love' was an incentive as she chose to travel to face her psychological problems and engage in new experiences. My first experience was a 16-day trip to Europe, where I explored a new world that allowed me to return to Egypt a new person.”

Commenting on her first experience, Ali said, “When I saw the world outside the Egyptian border, I came to realize that I was trapped in a box. The experience was worth the risk and challenges.”

Once back, Ali decided that she did not want her experience to remain a mere personal story that ended with her return to Cairo airport. This is how the idea of “Travel with Shee” came about, to encourage other girls to travel and share experiences in the workshops.

"The girls who share their experiences in the workshops shed light on their own social circumstances, so that other girls become aware that traveling is not just for more emancipated or higher social classes,” Ali said.

She added, “The workshop is designed to break social and psychological barriers. Most of the questions asked by women who have never been outside Egypt focus on how to face the parents’ negative attitude, deal with Western societies or handle the high cost of travel.”

She stressed, “After hearing stories of other women with similar social and financial backgrounds, they learn about the options that may make it easier for them to decide to travel.”

Ali focuses in the workshops on encouraging the women to travel as a way to fulfill and free themselves in Egyptian society.

She said, “Our daily life is full of people who dictate what we do, by advising or coercing us. This often causes women to lose the ability to make key life decisions. Once they break this tradition and start making their own decisions — even trivial ones such as choosing what meal to have — their self-confidence will be boosted. This will not happen if they remain trapped in their small circle.”

Women who manage to break social barriers often face a backlash that points to religion. In December 2012, Dar al-Ifta, Egypt's official religious institution tasked with drafting edicts, had settled the debate on women traveling without a male guardian or a male relative, and authorized women to travel with other women. The ruling focused on women's personal safety, which is the key factor that religious scholars took into consideration when discussing whether or not women should be allowed to travel alone.

Ali said, “To ensure safe companionship, 20,000 girls became a member of the 'Travel with Shee' Facebook page, which has become a platform that brings together girls who share the same desire to travel and be encouraged [to do so]. [We] do not organize trips for female travelers, but we open channels of communication for women looking for a chance to travel.”

Amani Hussein, 28, hails from a middle-class family in Upper Egypt. She pursued a master’s degree in Germany. Hussein told Al-Monitor, “Traveling has helped me achieve my goals. My decision to pursue my university studies in Cairo was the first step in confronting my parents. They felt that I was derailing from the family tradition requiring that girls get married and have their own family right after finishing school.”

She continued, “The dispute with the family mostly ends with the parents seeing that their daughter’s life has changed. Parents are more likely to accept the idea of their daughter traveling for their studies, rather than traveling to discover the world or to be free.”

Speaking to Al-Monitor about her travel experiences to seven countries by herself, Hind Saeid, 32, said, “Girls may benefit from the small margin of freedom given by their parents to obtain full freedom. My work in the public domain gave me more freedom away from my family. Most girls aspire to live new experiences where they discover themselves away from their family.”

Saeid added, “I experience tough situations every time I travel, but being responsible was the first step in becoming independent and responsible for my own decisions.”

Indeed, there are many examples of Egyptian girls who manage to overcome social and religious obstacles and embark on journeys outside Egypt's borders. For many girls in Egypt, traveling does not seem a time to just relax, but more so an opportunity to discover their true capacities and personalities.