All-female band Bnt Al Masarwa is turning the oppression of Egyptian women into songs to raise awareness of their discrimination. 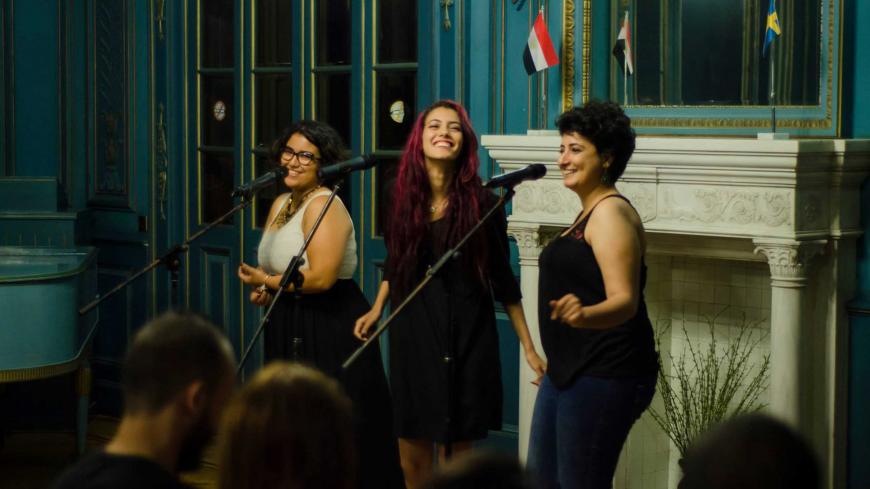 Three young Egyptian women, united in their belief that music can create social change, formed a band that spotlights the problems faced by women in Egypt, from female genital mutilation to forced marriages.

The band, called Bnt Al Masarwa, Arabic for “Daughter of Egyptians,” consists of Marina Samir, Esraa Saleh and Mirette Abdel Moula, who decided to give a voice to women’s suffering through their songs.

The three young women met in 2014 at a creative writing workshop organized by Nazra for Feminist Studies, a nongovernmental organization that seeks to enhance and support feminist movements in the Middle East and North Africa.

The workshop's goal was to write song lyrics that highlighted the discrimination faced by women in Egypt.

The band's songs map out the main hurdles faced by Egyptian women, including gender-based violence, racism, sectarianism, conservatism and religious discrimination. The song “They Taught Us in the Past” spotlights the social norms that are deeply rooted in society and how they oppress women. "They taught us not to talk because woman's voice is ‘awrah’ [Arabic word for forbidden]. … They taught us in the past that ignorance is safety,” goes the lyrics.

"We took the decision to form the band without any hesitation since we have good voices and worked well together to produce songs. We organized our first concert in June 2015 in downtown Cairo,” Samir, a student at Cairo University's Faculty of Economics and Political Science, told Al-Monitor. “The feedback was highly positive and beyond our expectations." During that concert, they formally launched their first album.

The band takes pride in its name, as they consider themselves not only the daughters of Egypt, but tell the stories of Egyptian women. "We, as Egyptian women, have special conditions. Every single Egyptian woman is fighting her own battle — for her most basic rights or for her livelihood. The name of the band reflects the core of our songs," Samir said.

Samir said her family has been supportive. "My parents attended our first concert," she said. "My mother believes the lyrics accurately depict our suffering. My father, meanwhile, thinks Egyptian society is not that oppressive. He said this because he is a man and has not experienced our suffering. Nevertheless, he did not prevent me from joining the band."

In order to put themselves in the victims' shoes, the band members organize storytelling workshops in many governorates, giving women a chance to narrate their stories.

"These workshops keep us abreast of the diverse types of oppression imposed on Egyptian women. For instance, the problems faced by women living in cities are different from those facing women who live in villages. Therefore, these workshops are a must to be able to accurately depict their suffering through our songs," Samir remarked.

While the first album's songs were inspired by their own life experiences, they plan to make their second album, which will have 18 songs, about other women's suffering. Upper Egyptian women were their target in the new album.

"In Upper Egypt, which is the country's most conservative society, social norms and traditions are deep-rooted and dominate everything. We organized three workshops during the period August 2016 to February 2017 in three governorates: Minya, Assuit and Aswan," Samir said.

The visits gave them unique insight to the problems of women — and helped them see how very different they could be. In Assuit's village of Der Dronka, women voiced their anger because of the sectarianism and religious discrimination that continue to plague the governorate. Bearing the brunt of such discrimination, some Christian families banned their girls from going to schools to avoid any clashes or harassment.

In Aswan city, women felt hurt and humiliated by racist comments related to their dark skin. "We found out that women at each governorate are grappling with a different kind of discrimination. This is the core of our second album's songs," Samir said, adding that female genital mutilation (FGM) and early marriages also topped women's problems.

As funding remains one of the challenges facing the band, they recently launched an online crowdfunding campaign to cover the expenses of the second album and they reached their goal.

Samir, meanwhile, pointed out that some people criticized the band. "Last year, we held a concert at Cairo University celebrating the 16 days of activism against gender-based violence. One of the male students told us that our songs aim to eliminate traditions and customs. This is completely groundless. But most of the audience supports us and encourages us," Samir recalled.

"A girl born in Egypt is exposed to violence from the first day of her birth when she is exposed to FGM. I know, we are young, but we have experienced this oppression. This issue has nothing to do with age or social background. It is about oppression that haunts women without exception," said Samir.