As the Syrian Democratic Forces launch a new phase in the operation to liberate the city of Raqqa from Islamic State control, many questions remain about the military and political situation on the ground. 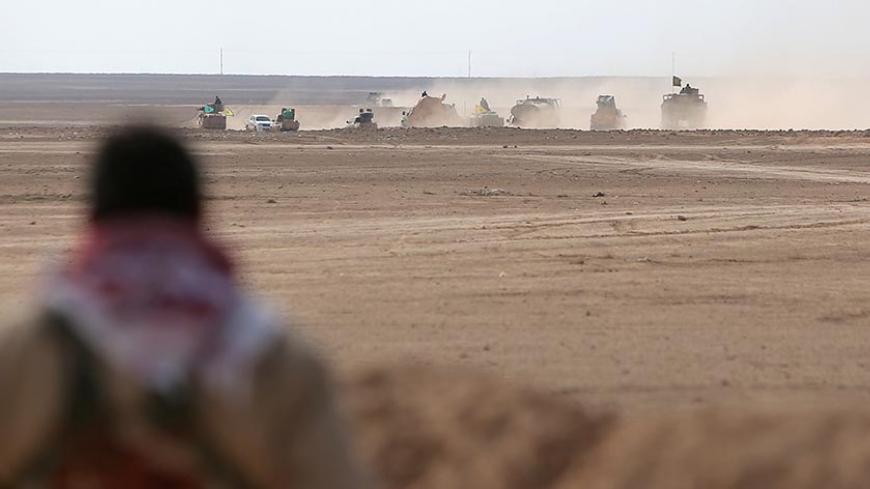 The SDF commanders in the region who spoke to Al-Monitor say liberating Raqqa will be easier than militarily seizing Manbij. The operation has been going on for four months and is expected to continue until the summer.

SDF officials have been talking to Kurdish and Arab politicians and opinion leaders to discuss the future of Raqqa. The diplomatic side of this operation is the most crucial.

Before touching upon these issues, one should understand the importance of Raqqa. Geographically, Raqqa is in the middle of Syria and is of strategic importance. It has been under Islamic State (IS) occupation over the past three years and has been the main source of revenue for the organization. It is the organizational and supply center of IS both in Syria and Iraq. The liberation of Raqqa will be a deadly blow against IS and mark the turning point in the marginalization of gangs benefiting from the war.

Raqqa is the most diverse city in Syria with Arabs, Kurds, Armenians, Turkmens and Christians. It is difficult to know what IS did to all of these people.

People of nearly all ethnic and religious backgrounds participate in the operation to liberate the town. But it is the SDF that is carrying out the operation with the participation of many women and men who are natives of Raqqa.

SDF commanders say they will first besiege the city and later target the city center with arms to be supplied by the coalition. The SDF currently advances on the city from the east, west and north. The Euphrates River is located to the south of the city and has two bridges on it. If the city is besieged, the coalition will reportedly hit these bridges and the Euphrates will be a natural part of the siege. In this case, IS would have no option but to go to Deir ez-Zor to the southeast.

Such a development will also introduce new political developments. The initiative will be a cornerstone in getting rid of terror in Syria and will facilitate the establishment of a new Syria. Kurdish officials from Northern Syria and Rojava say the liberation of Raqqa will be "the guarantee of a democratic and federal Syria and a free Rojava." Again, many people view Raqqa's liberation as an indispensable part of the Kurdish-Arabic alliance in the region.

What will be the administrative model for Raqqa after the military liberation of the city? Kurdish officials told Al-Monitor the model that will be set up in Raqqa will be a resolution model for all of Syria. They note that they have discussed this with the Arab tribes in the region and have received crucial material and moral support from them. Recently, many Arab tribes visited the battlefront and supported the fighters. Political and military authorities here say after its liberation, Raqqa will be run by a civilian administration and people will preserve their own identities. These authorities emphasize that military forces have no goal of administering the city themselves.

This issue has also been discussed with the coalition authorities led by the United States. The new US administration continues supporting the operation like the previous one. The strong rapport between the Pentagon and the SDF administration is expected to become even stronger in the coming period.

The relationship between the United States and the Northern Syrian Forces won't regress until Raqqa's fate is decided. Raqqa's fate has come to mean Syria's fate. After Raqqa is liberated, there will be a gathering to form the new Syria. Those who were strong in the field will naturally have more effective cards at the table.

But Raqqa isn't northern Syria's and Rojava's only agenda. The Astana and Geneva talks are also closely followed here. And then there's the draft constitution prepared by Russia. Russia's draft is neither rejected nor accepted — it is considered to be a draft that should be discussed. It is taken as an insufficient step, but a first one by international powers. Geneva and Astana meetings haven't generated hope for a resolution yet. Russia took a step by preparing this draft. Russia suggests autonomy for Kurds, but the Kurds think their issues will be solved not through autonomy, but through a democratic, federal Syria. In Russia's draft, other peoples and faiths outside of the Kurds have been ignored. That is also seen as a flaw. But it is important that Kurdish rights are mentioned in a document for the first time.

Some sources Al-Monitor spoke with talk of a "social contract draft" being prepared to act as an alternative constitution for Syria. This draft is expected to be announced soon. The draft will be presented as the Constitution for Federal Syria. How this draft from northern Syria will be received in Damascus, Moscow and Washington is a very important question. But whatever the outcome is, it will be very important for the solution in Syria. If it's rejected, chaos will continue.

Another development in the region is the Turkish operation in al-Bab. What's happening there is generally perceived as a fiasco. This is a useful reminder: President Recep Tayyip Erdogan invaded the Shehba region to the north of Aleppo because of his anti-Kurdish sentiment and his ambition to prevent the Kurds from attaining a status in Syria. They took Jarablus and other places from IS without much fighting. But now, Erdogan's plans appear to be failing at al-Bab.

Erdogan sold out his friends of five years whom he was supporting in Aleppo. Just to be against the Kurds, he gave up all of the Free Syrian Army's (FSA) gains in Aleppo. He made a nasty deal that may be his demise.

The Erdogan administration first said they would create a buffer zone from IS 20 kilometers (12 miles) deep after they took Jarablus and Dabiq. But their goals turned out to be different. Forces in the region saw that Erdogan was only pursuing his own agenda there. That is why the FSA, his allies at al-Bab, are upset with Erdogan. They think they have been sold out in Aleppo. Cracks in the alliance between the FSA and Erdogan will surface soon.

Erdogan's defeat at al-Bab, Northern Syria Forces' Raqqa operation and their growing relations with the United States, and the draft constitution Russia submitted are all developments of vital importance for Syria. In the spring and summer months, these developments will for the most part be implemented, and by the end of this year a "New Syria" may emerge.