In the Turkish press' latest act of self-censorship, Hurriyet has axed its interview with Orhan Pamuk after the celebrated novelist said he will vote no on the upcoming presidential referendum. 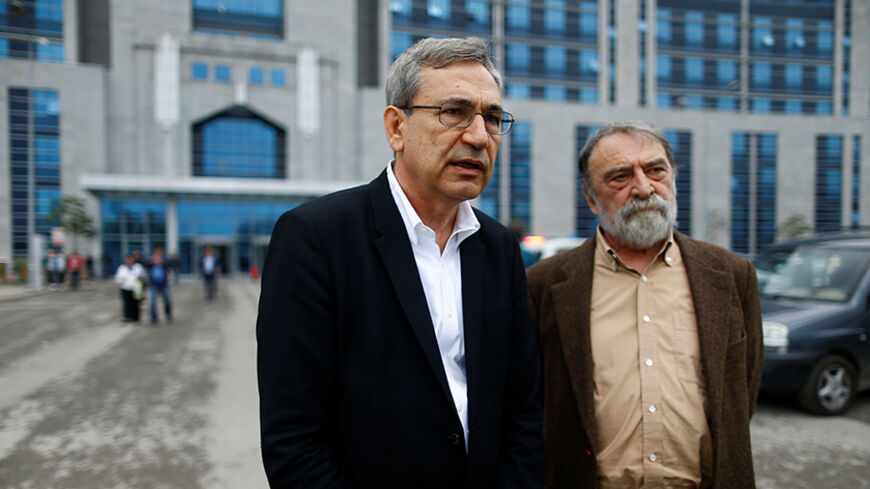 The screws on free expression are tightening in the run-up to the April 16 referendum on boosting the powers of Turkey’s presidency, and the country's mainstream media is a zealously self-censoring accomplice.

Orhan Pamuk, a celebrated novelist and Turkey’s first Nobel laureate, joined the ranks of the silenced when Hurriyet axed an interview with him that was meant to run on Feb. 13.

Pamuk confirmed that he had spoken at length with Cansu Camlibel, the newspaper’s newly appointed Washington correspondent. The interview was presumably censored because Pamuk said he would be voting against the superpresidency, which would concentrate near absolute power in the office. Pamuk told a Turkish advocacy group, “I said I would be saying no and explained why. Unfortunately, the news is true. In the end the interview was not published.”

Dogan Holding, the conglomerate that owns Hurriyet, had already provoked a furor when it sacked a prime-time anchor from its flagship Kanal D TV channel. Iran Degirmenci was fired last week after declaring that he would vote against the referendum.

The channel said he had violated its principles of neutrality, but critics were quick to point out that prominent Hurriyet columnist Fatih Cekirge had been left alone after saying he would be voting yes.

There followed news that Hakan Celenk, a columnist for another Dogan broadsheet, Posta, had been given the boot for opposing the superpresidency as well. Not surprisingly, Dogan titles did not carry the news that promising young Turkish pianist Dengin Ceyhan was detained today for his social media posts.

“Who will it be next?” asked a prominent Turkish columnist who spoke on condition of anonymity to Al-Monitor for fear of likely repercussions. “The climate is absolutely suffocating, I don’t feel like writing any more. Besides what is the point? They will win the referendum by any means,” the columnist said.

Concerns about electoral mischief are apparently shared by Western leaders. German Chancellor Angela Merkel called on Turkey to allow the Organization for Security and Cooperation in Europe to monitor the referendum during a trip to Turkey in early February.

Opinion polls suggest the contest will be tight. The polling outfit Gezici published its most recent results today showing 43.7% voting in favor and 45.7% voting against. Some 10.6% of respondents said they were undecided.

Although most of the Turkish press is now in the hands of Erdogan’s cronies, Dogan’s support is seen as critical in winning over the undecided. Its stable of newspapers and TV channels has massive reach despite recent calls for a boycott over its brazen kowtowing.

Erdogan has cynically cast the referendum as a choice between himself and doom, accusing naysayers of “acting in concert with terrorists.” The president has gone as far as to suggest that those who vote against granting him more power were supporters of the July coup.

“The situation of those who say no is in some respects siding with the treacherous July 15 coup attempt,” he said before taking off for a tour of the Gulf earlier this week.

Even businessmen in Erdogan’s inner orbit are said to have reservations about empowering him even further but are too afraid to say so because they are humiliatingly dependent on him for their financial survival.

Dogan’s boss, Aydin Dogan, has been struggling to make nice with Erdogan ever since he was slapped with a multibillion-dollar tax fine for allegedly cooking his books. Overt pressure on the tycoon started when Hurriyet ran a story about a German-based Islamic charity that allegedly channeled millions of euros to businessmen and a TV station with close ties to Turkey’s Islamists.

Relations began to improve when, following in the footsteps of fellow media bosses, Dogan began sacking journalists critical of Erdogan. He sold one of his prized titles, Milliyet, to a pro-Erdogan rival and shuttered the liberal daily Radikal. The real breakthrough came on July 15, when Erdogan appealed to the Turkish people to resist the putschists via video live-streamed on a cellphone held by CNNTurk anchor Hande Firat. It was a decisive moment, and the coup crumbled. Firat was swiftly promoted to Hurriyet’s Ankara bureau chief. CNNTurk is also owned by Dogan.