The few remaining opposition newspapers still able to report on Turkey's economic floundering are losing their own foreign investors in a dramatic demonstration of the trend the ruling Turkish party is trying to suppress. 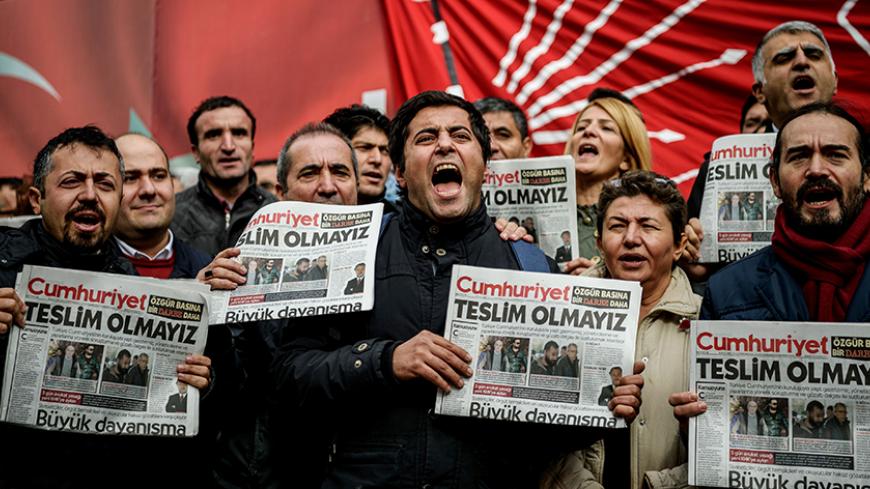 Protesters hold copies of the latest edition of Turkish daily Cumhuriyet during a demonstration outside the newspaper's headquarters a day after its editor-in-chief was detained by police, Istanbul, Nov. 1, 2016. - OZAN KOSE/AFP/Getty Images

Mounting terror threats, massive purges, shrinking press freedom and government pressure on the business world are beginning to take their toll on Turkey, including its media bosses.

Axel Springer SE, one of Europe’s biggest publishers, will not be making new investments in Turkey, the group’s chief executive officer announced Nov. 3. Mathias Dopfner added that the Berlin-based media giant will sell its remaining 7% stake in Turkish broadcaster Dogan TV. In a call with reporters, Dopfner didn’t mince words: “Press freedom is being trampled upon,” he said.

The decision came after Monday’s raid on the left-wing daily Cumhuriyet, which ended in the detentions of 15 members of the newspaper’s staff, including its editor-in-chief Murat Sabuncu, on thinly supported charges that they colluded with the July 15 coup plotters.

In January, Axel Springer shed its 2.3% stake in Dogan TV. The partnership struck in 2007 between Dogan and the German outfit was a source of pride for Dogan CEO Aydin Dogan. He had previously partnered with Turner Broadcasting to set up CNNTurk. The news channel drew sharp criticism when it aired a documentary about penguins as police brutality spiraled out of control during the 2013 Gezi protests.

Might Turner be the next to pull out? The question must be preying on the octogenarian tycoon’s mind.

Dogan, like most media barons in Turkey, is accused of using his stable of newspapers and television channels to curry favor with successive governments for his other vast business interests. This feat was easier to pull off in the days when Turkey was ruled by a succession of weak coalitions. Newspaper owners could play one political leader off against the other, ensuring all the while that none of the then-omnipotent army’s red lines were breached.

But over a decade of single-party rule by the Justice and Development Party (AKP) has meant either toeing the government line or going bust, as Dogan rudely discovered. His company was slapped with a slew of mind-boggling fines after its flagship newspaper Hurriyet covered allegations of the illegal transfer of funds from a German-based Islamic charity to a pro-government news channel in Turkey.

These penalties were dropped after Dogan relinquished his ownership of two mainstream newspapers, shut down the opposition daily Radikal and sacked dozens of journalists deemed to be anti-AKP and replaced them with others loyal to the party.

It seemed that Dogan had finally redeemed himself when Turkey’s President Recep Tayyip Erdogan made a live appearance via a FaceTime video connection on CNNTurk on the night of the failed coup. It proved to be a turning point.

Tens of thousands of Turks took to the streets, forcing the putschists to make a choice: either to fire on the people or to give up. They eventually did surrender, but not before over 200 civilians had been killed.

Yet pro-government columnists continue to attack Hurriyet and some of its journalists, most notably its star investigative reporter, Ismail Saymaz, who continues to uncover embarrassing news. Dogan is rumored to be under immense pressure to pull out of the media altogether and allow pro-AKP businessmen to scoop up the spoils.

But the question of where they would find the money to do so is becoming a big one. Strong growth long underpinned the AKP’s seemingly endless popularity and the economy is finally beginning to slow down.

The government is putting increasing pressure on the banks to lower lending rates to jumpstart growth. Erdogan suggested that a failure to do this would be tantamount to treason.

Yet the more the government interferes with the markets, the more likely it is to have the opposite effect, spooking foreign and local investors alike.

The ongoing seizure of assets belonging to companies and individuals accused of having connections to Fethullah Gulen, the Islamic preacher Turkey blames for the coup, has added to the jitters. At least 600 such companies are said to have had assets totaling $12 to $15 billion seized and transferred to government hands.

Many of them reportedly remain liable for money they borrowed from Turkish banks but are no longer able to pay back their loans. A Western banker who spoke to Al-Monitor on condition of strict anonymity because of the sensitive nature of the issue summed up the crisis of confidence: “If you were a bank manager in Turkey today you would think a million times before lending money to anyone for fear that they would be labeled Gulenists, then default on their loan, leading in turn to being labeled a Gulenist yourself.”