Is Turkey being snowed by flurry of fake defense news?

Turkey's news media have been overloaded with exaggerated and at times improbable defense industry and security reports serving as political propaganda for the government. 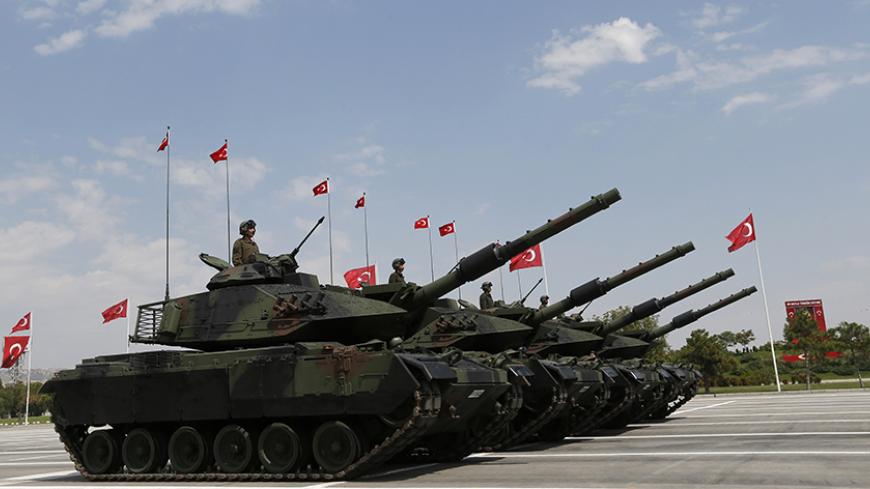 As the United States is plagued by a politically motivated "fake news" epidemic, it seems there's been an outbreak in Turkey as well.

Turkey tentatively expects an April vote on a constitutional amendment referendum, and a presidential election is possible at the end of 2017. These two important events will determine Turkey's political climate. Hence, the media that support President Recep Tayyip Erdogan are desperate to produce reports highlighting Turkey's unstoppable rise.

Many of Turkey’s medium- and large-scale companies, aware that the construction sector is not as profitable as before, want to shift to the defense industry, which they see as a rising star because of generous government incentives. When one adds the shortage of expert writers in defense and military technology to the determined search by Erdogan's Justice and Development Party (AKP) for new success stories, it is not surprising to frequently see exaggerated and even fake news reports. Since December, there has been a perceptible rise in this mind-boggling type of "reporting," which mainly features themes such as:

According to a report headlined “Our native weapons that shook the earth," the world is astounded by Turkey’s defense industry projects.

Among those "world-shaking" projects are Turkey’s first nationally made frigate; Javelin, which is supposedly the "world's first guided helicopter missile"; and the Bora missile, which has the range to reach Rome and was interpreted as a not-so-subtle message to Europe.

Another most improbable report was in the pro-government daily Akit on Jan. 16. The report actually described the Korkut low-altitude air-defense system, with two 35 mm cannons and a range of 2.4 miles, as a "military electronics industry product that can even stop nuclear bombs.” The author of this report's knowledge about what a ballistic nuclear missile is and how a country can defend itself against nuclear armaments was obviously confined to the sci-fi movies he had watched.

Defense analyst Turan Oguz told Al-Monitor the primary cause of these absurd defense stories in the Turkish media is the lack of qualified security/defense correspondents and editors. Oguz also believes the public relations efforts of Turkey's defense industry contribute to the abundance of misleading and even fake news reports. “Each media group in Turkey recklessly, without hesitation, consciously embellishes preposterous, subjective reports that will be appreciated by the ideological group it is affiliated with,” he explained.

For example, simple research and development work by a defense company becomes a full-page report in a pro-government newspaper under the headline "Turkish engineers develop important space technologies."

When they see the popularity of such reports, a few secularist and more serious newspapers also feel the need to follow. One of those dailies even came out with a totally hatched article, “Ataturk's special aerial intelligence unit,” and seriously claimed that back in 1922, Turkey’s founder, Mustafa Kemal Ataturk, had set up a special unit of select officers to work on a top-secret "Anka 10 T001 K" drone surveillance project.

The company manufacturing Anka drones today was thus able to link its brand to Ataturk and score a spectacular public relations gain.

Arda Mevlutoglu, a rare defense industry and military technology expert in Turkey, offers "embellishment detection" on his Twitter site to expose exaggerated and false reporting on the defense industry. Similar to Oguz, he also blames intellectual inadequacy for the preponderance of inaccurate and inflated information in defense and security reporting.

“Military subjects have always been followed with interest in Turkey by a large segment of the population. The reasons for this interest are many, including attention paid to weapons, soldiers and the army in our culture, and the bitter experience of traumas experienced when Turkey was placed under embargoes," he said. "Pro- and anti-government media and researchers recall those traumas when writing bombastic articles in line with their own political inclinations. When one newspaper says, ‘We are building our national airline,’ the other says, ‘The airplane is local but all its parts are imported.’ Both could have degrees of truth."

Intentional or otherwise, the Turkish media's exaggerated defense industry news reveals one bitter truth: Turkey, which had allowed its entire defense and security mechanisms, along with its policies, to be managed by NATO during the Cold War era, still hasn’t been able to free itself from those shackles in the 21st century. Mevlutoglu said it is totally left to the military bureaucracy to govern the full gamut of defense and security issues.

“This reliance on the military prevented development of qualified academic cadres and media, hence the ease of spreading fake news. The latest example was the shooting down of our RF-4E reconnaissance plane over the eastern Mediterranean in 2012. Not the relevant officials of the state nor the media and its so-called experts could come up with a reliable explanation of what happened," he said.

Also getting its share of this exaggerated and at times false reporting is Turkey’s Operation Euphrates Shield, which seems to have stalled at al-Bab, Syria. For example, in the first days of the operation some newspapers reported that the army was moving “specially armored Leopard 2A4” tanks to the battle zone. But the Leopard 2A4 tanks, which Turkey had bought second-hand from Germany, were never modernized and sustained heavy damage in the Syrian operation.

It is true that Turkey’s defense industry made important strides from 2010-2015. But a look at relevant documentation points to a slowdown since then. Now, what we sadly see are efforts to cover up — with stupefying sensationalism — this slowdown caused by inadequate intellectual capacity, insufficient funds for research and development, lack of innovation, excessive politicization and misconceived projects.