After significant progress on the domestic level, the Turkish defense industry has reached a challenging phase in which it needs to enhance its export capacity to ensure sustainable growth. 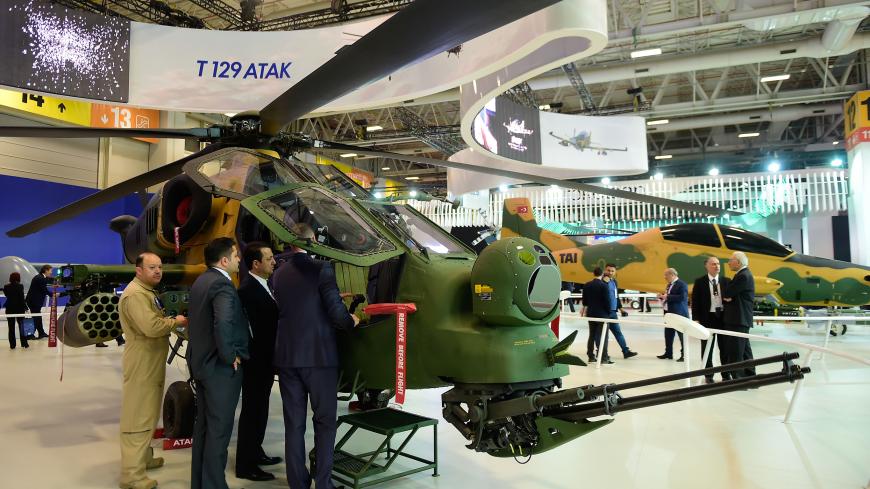 Rarely a day passes in Turkey without newspapers trumpeting another success story in the defense industry. In the past two years, in particular, the defense and aviation sectors have become rich propaganda material in a government rhetoric exalting nativism and nationalism in almost every realm.

Amid the avalanche of exaggerated praise, realistic assessments of the state of the Turkish defense industry are also available. Last week, the Defense and Aerospace Industry Manufacturers Association released its 2017 sectoral performance report, which, in a sense, is the report card of the Turkish defense industry for last year. The document paints a generally successful year, but indicates that the sector should now focus on sustaining growth, drawing a cautiously optimistic picture of the future.

According to the report — a compilation of individual figures provided by members — the sector’s turnover was nearly $6.7 billion last year, a 12% increase from 2016. In the breakdown, the biggest turnover — some $2.4 billion — came from the sale of land vehicles and systems followed by military aviation products with $1.13 billion; weapons, ammunition and missiles with $828 million; civil aviation products with $650 million; naval products with $569 million; military maintenance with $171 million; and logistics with $134 million. Another $650 million was listed under the “other” category.

Exports were worth $1.82 billion, a 6.6% decrease from 2016, including $684 million worth of final products sold to end users, with the rest intermediate products sold to foreign companies.

The report does not indicate how much of the exports were part of offset arrangements in government procurements from foreign manufacturers. If all sales to foreign companies are presumed to be offsets, the remaining $684 million — or 37% of export revenues — are supposed to have come from contracts won in a competition environment. According to this figure, the Turkish defense industry is still weak in terms of international competitiveness.

Stressing that exports had been slowing since 2014, the report notes that the sector has reached a phase of sustaining growth, with domestic sales — primarily to the Turkish military — at a point of saturation. Aside from traditional offset sales to European and US companies, the report underlines the importance of boosting sales to the Middle East, the Turkic republics of Central Asia and the South Asia-Pacific region.

As of the end of 2017, the sector employed 44,740 people, a 30% increase from 2016, according to the report. The increase, which corresponds to about 10,000 new jobs, is indicative of the many Turkish companies that have moved from other sectors into the defense industry, driven by political winds and economic incentives.

The report notes that imports in the sector are on the rise, standing at $1.54 billion in 2017, up 20% from the previous year. The spike in imports stems from the foreign-made components required for the increasing domestic production and the need companies feel to stock some products in the face of covert embargoes by the United States and European countries.

Half of the sector’s imports are from Europe and 35% from the United States, indicating how reliant the Turkish defense industry remains on Western technology, including intermediate products and subsystems, despite Ankara’s native and national bombast. The West’s 85% share in the imports must be disappointing to Russia, which has sought to cash in on Turkey’s souring ties with its NATO allies.

With such high reliance on imports from the United States, Turkish defense industry companies are following with concern the rising calls in Congress to curtail military sales to Turkey.

In another downside, the report notes that efforts to reverse the brain drain by luring qualified Turkish expatriates back home have failed to bear fruit, underscoring the sector’s dire need for highly skilled technology workers.

Commenting on the sector’s outlook, defense industry insider Arda Mevlutoglu told Al-Monitor that the increase in turnover despite the general deterioration in the Turkish economy was commendable, but he stressed that “difficulties obviously persist on the side of exports, which are critical for sustainable growth."

The drop in exports is the result of a slowdown trend since 2014, Mevlutoglu said, pointing to a combination of factors. Due to Turkey’s military campaign in northern Syria and ongoing security operations at home, military needs have increased, boosting the turnover of the sector, he explained. “The production priority has been on meeting domestic demand, while export-oriented business development and marketing capacities remain insufficient and the sector’s productivity problem persists; hence, exports remain below the desired level,” he said.

“Still, the more than expected increase in turnover is good news. I guess the amount of exports will increase in 2018, given the contracts signed with Qatar. The picture looks good in the long term,” he added.

In March, Turkish companies sealed contracts worth some $400 million with Qatari counterparts during the Doha International Marine Defense Exhibition and Conference. The deals involve the sale of armed drones, armored vehicles, assault boats, special operations boats and electronic surveillance systems, among others.

The prospect of sales to Pakistan is also boosting optimism that the decline in exports will be reversed this year. A major deal in the pipeline involves the sale of 30 T129 ATAK attack helicopters to Pakistan, which has also shown interest in buying four MILGEM Ada-class anti-submarine warfare corvettes from Turkey.

An Ankara-based defense industry expert who wished to remain anonymous stressed that self-sufficiency and sustainability would be critical for the growth of the sector. “Turkey cannot become a major regional power without military deterrence, but at the same time, it cannot trust weapons suppliers from traditional Western allies,” the source said. “Therefore, for the sake of better deterrence, Turkey should rely on its own capabilities in developing arms and seek all opportunities to export [to achieve sustainability]. Without self-sufficiency and sustainability, the sector can hardly grow with just hollow bluster.”

Indeed, defense autarky appears to be a major driver in the efforts to expand the industry, along with other objectives such as economic gains, international prestige and political grandstanding for domestic consumption.

Ankara, however, still lacks a clear-cut political vision or a road map on how to effectively manage the sustainability phase. A number of serious downsides stand in the way of progress, calling for urgent solutions. Along with institutional challenges within the sector, extreme political interference and nepotism hinder merit-based development. Coordination between the military and civilian bureaucracy remains poor, in addition to inadequate cooperation between the sector, policymakers and universities. Due to the domination of big state-backed firms, small and medium-sized companies have little room to survive, which, on top of the problem of human capital deficiency, has a killing effect on innovation.