The Turkish defense industry saw a significant decline in its revenues last year according to newly released data, but companies in the sector remain optimistic about their growth prospects. 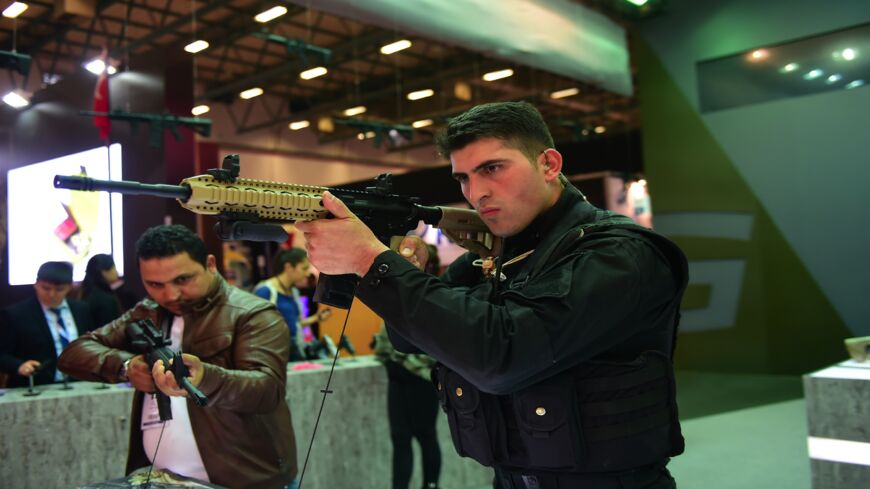 People look at military weapons on May 9, 2017, during the opening day of the 13th International Defense Industry Fair in Istanbul. - YASIN AKGUL/AFP via Getty Images

Turkey’s defense industry has been a rising star in the country’s economy in recent years, attracting well-established entrepreneurs and novices alike. Pro-government business people — in particular those eager to draw close to President Recep Tayyip Erdogan — have vied fiercely for a place in a sector where political dividends are as high as economic ones.

Yet a newly released report by the Defense and Aerospace Industry Manufacturers Association (SASAD), widely seen as the most reliable and least politically contaminated overview of the sector, shows the growth of the industry remains prone to external headwinds and political risks.

The report, which summarizes the sector’s performance in 2020, cites the economic fallout of the COVID-19 pandemic as the reason for downticks in an array of key metrics in the industry. The sector’s turnover fell by 18.6% to some $8.9 billion from $10.8 billion in 2019. Overseas sales revenues totaled about $2.3 billion, dropping 26.1% from nearly $3.1 billion in 2019. Research-and-development spending decreased 25.7% to $1.2 billion from $1.6 billion the previous year. Imports were also down, decreasing 30% to $3 billion. In sum, figures indicate the Turkish defense industry contracted by one-fourth in 2020 from the previous year. The industry’s rise had begun in 2015, when its turnover stood at about $5 billion. The sector doubled its turnover by 2019. Last year’s decline brought the figure back to the level of 2018.

The impact of the pandemic could hardly be disputed, but the report omits another major factor: the sanctions the United States slapped on Turkey over its purchase of S-400 air defense systems from Russia. Washington removed Turkey from the joint F-35 fighter program in July 2019 and followed up with sanctions under the Countering America's Adversaries Through Sanctions Act (CAATSA) in December 2020.

The Turkish defense industry is heavily reliant on raw materials and intermediate products from the United States, though ample stockpiles limited the impact of the sanctions last year. But Ankara is well aware their impact will aggravate the situation as stockpiles continue to drain. This is one of the reasons underlying Ankara’s efforts to mend fences and court favor with Washington, including its heightened profile in Afghanistan.

Despite the cushioning effect of stockpiles, the row over the S-400s and related sanctions were not without consequences for Turkey’s defense industry last year. First, the crisis heightened the risk premium of the sector, discouraging foreign companies from doing business with Turkish counterparts and foreign lenders from financing Turkish companies. Second, the CAATSA sanctions hit imports for the military and civil aviation sectors from the United States as well as their exports to other countries.

The military and civil aviation sectors, which rely heavily on US-made inputs, contributed about $2 billion and $1.3 billion respectively to the turnover of the Turkish defense industry last year, accounting for 37% of the total.

Of note, the worth of new orders received by Turkish defense companies also dropped last year. They totaled about $6.2 billion, a 42% decrease from some $10.7 billion in 2019. In terms of technology segments, civil aviation and land systems topped the list, followed by military aviation and naval systems.

By comparison with turnover, manufacturers in the sector appear to have a business potential of less than a year, meaning they need to focus on securing new orders, especially from foreign buyers.

In other words, the Turkish defense industry, which is now faced with the task of sustaining its development after the initial boom, risks stagnation and perhaps continued contraction unless it manages to expand its foreign markets. Boosting exports is the only way to overcome last year’s downturn and ensure the sector’s steady development in the coming years.

The industry’s heavy reliance on imported inputs remains the fundamental downside here, as evidenced by the fact that the worth of its imports and exports is more or less equivalent. This means any effort to increase exports results in an increase in imports, which is akin to growth on steroids. Such import-reliant growth is, no doubt, prone to political and other risks.

US and European manufacturers top the list of the industry’s foreign suppliers, with their share reaching up to 80% in some branches. In the land systems segment, for instance, imports from the United States and Europe accounted for 83% of the $451 billion imports in this category in 2020, according to the report. Similarly, 67% of the $624 million imports destined for military aviation products were from the United States.

In a sense, the Turkish defense industry’s reliance on US and European suppliers had served as an anchor keeping Turkey in the Western security bloc, no matter how willing Erdogan’s government might be to turn to the East and open up to Asian markets. Hit both by the pandemic and the CAATSA sanctions, Turkish defense companies are already sounding the alarm over depleting stock of key inputs. To continue production, they need raw materials and intermediate products from the United States and Europe. Ankara may be very much disturbed by this dependency, but it stands almost no chance of shrugging it off for at least a decade. Erdogan’s recent efforts to make up with the United States and other NATO members resonate as an acknowledgment of this reality, among other foreign policy predicaments.

The decline in research-and-development spending in the Turkish defense industry is another troubling sign for Ankara with regard to the future of the sector.

Nevertheless, industry actors remain upbeat about their prospects despite the setback in 2020. According to a survey referenced in the SASAD report, nearly 79% of company managers in the sector are optimistic their businesses will develop and grow in the next two years. More than 90% say they plan new investments to further grow their companies, and nearly 32% envision research-and-development budgets amounting to more than 10% of company turnovers.