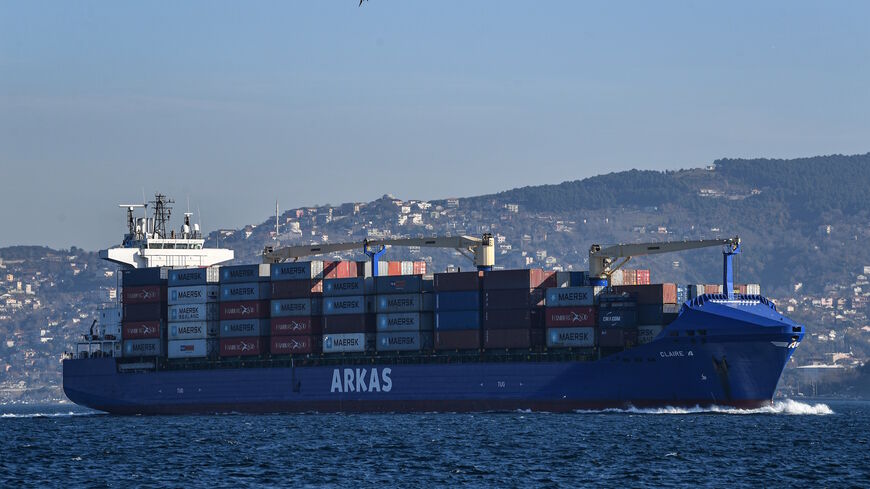 A container ship sails to Marmara Sea on Dec. 18, 2019, in Istanbul. - OZAN KOSE/AFP via Getty Images

A big uptick in exports was a major driver of the Turkish economy’s 21.7% growth rate in the second quarter, but how much Turkey could sustain the trend is open to question as its producers remain heavily reliant on imported inputs and appear to have benefited from an unlikely silver lining of the COVID-19 pandemic.

The massive growth rate, announced earlier this month, owed much to the strong base effect from the second quarter of 2020 when the economy shrank by more than 10%, but there was clearly a growth momentum as well, marked by an increase in exports. While the revival of domestic demand contributed nearly 14 percentage points to the expansion, exports contributed almost 11 points. New investments stood out as another driver, fueled by the depletion of stocks during the pandemic. Yet the revival of the industry produced also some headwinds, namely an increased need for imported materials. Hence, imports rose as well and the contribution of net exports to growth was about 7 percentage points.

The positive impact of exports on growth and the balance of payments has continued in the third quarter, early indicators show.

According to Trade Ministry data, exports rose 37% to more than $140 billion in the first eight months of the year, while imports increased 26% to about $170 billion, meaning a foreign trade deficit of nearly $30 billion. On a year-on-year basis, exports were worth $208.4 billion and imports $255.2 billion, making for a deficit of nearly $47 billion. The figures represent a record level in exports and the highest level in imports since 2013.

Exporters acknowledge that the sharp increase in freight costs amid the COVID-19 pandemic has led European and even US buyers to gravitate from Asian sellers to ones in closer locations, including Turkey. The Istanbul Apparel Exporters’ Association, which represents an industry key to Turkish exports, says in a recent report that shipping rates from Turkey have increased as well, but Turkey “has obtained a certain advantage in exports to Europe, its main market, and also the United States, as the increase of freight costs on routes to the Far East and China has been much higher.”

In an apparent bid to sustain the shift, Turkish exporters have resorted to dumping, official data on non-domestic producer prices show. The high level of unemployment in the country and the cheapened cost of labor have similarly played into the hands of exporters, as has the devaluation of the Turkish lira.

Yet Turkish producers remain reliant on imported inputs and equipment to meet the increased demand of both domestic and foreign buyers.

In a separate report, the Istanbul Apparel Exporters’ Association highlights the other side of the coin. “Though the increased cost of shipping from Asia to Europe has come as a competitive advantage for [Turkey’s] ready-to-wear sector in terms of exports to Europe, it has increased the cost of the sector’s provision of raw materials from Far East Asia, causing trouble in the supply chain,” the report says.

The higher shipping costs come atop the Turkish producers’ heavy dependency on imported inputs, the costs of which reach up to 50% of export proceeds even in sectors such as apparel, food, textiles and leather, which are net exporters.

The ruling Justice and Development Party (AKP) had for years encouraged construction as the driving force of economic growth, even though the sector is inherently focused on the domestic market and is a spender rather than an earner of foreign exchange. With the construction sector now in turmoil, the government seems to have finally rediscovered the importance of hard-currency-earning industrial exports. In its medium-term economic program, published Sept. 5, the government projects overall economic growth of 9% this year, with net exports contributing 3.4 percentage points. In the ensuing three years, however, it projects a growth rate of 5% to 5.5%, with a relatively smaller net exports contribution — 1 percentage point at most.

Still, the program pledges certain measures to sustainably encourage exports such as efforts to “improve and enhance transport and logistical corridors” and “policies aimed at promoting quality, design and branding in sectors with mostly low-technology production to boost the value-added of exports.”

The program projects that exports would reach $211 billion and exports $258 billion by the end of the year. In other words, Turkey would face a foreign trade deficit of $47 billion despite the upsurge in exports.

The AKP government’s myopic policies over the years have contributed to the predicaments of exporters and marred their long-term prospects. Ankara did little to encourage the domestic industry in the 2003-2013 period, when the Turkish lira was relatively strong, letting imports crush many sub-sectors and thus aggravating the Turkish producers’ dependency on imported inputs. Apparel manufacturers, for instance, have come to import items such as cloth, zippers and buttons, which they were easily able to procure from local suppliers in the past.

That said, what other factors provide tailwinds to exports? The first is a labor force that has become cheaper due to rampant unemployment and is intensively used in the production of low-technology goods in particular. Official data show that despite the economy’s expansion in the second quarter, the share that wage earners take dropped remarkably from the same period last year.

A second lever is the ongoing slump of the Turkish lira. As of August, the price of the dollar was up 17% on a year-on-year basis. While the increase causes trouble on the importation leg, it has benefits for exports; hence, the exporters’ willingness for dumping. With the prices of goods sold overseas dropping below their prices at home, some pundits highlight the “immiserizing” impact of Turkey’s economic growth.

Either way, Ankara needs to incentivize exports and focus on export-oriented, high value-added industrial production to avoid grave current account deficit crises in the future. This requires a systematic and steady incentive policy that would inspire confidence in producers. True, Turkey is late to do that, but that’s the way out.