Growing investment in technology development is a promising sign for Turkey’s defense industry, but a series of structural problems that remain unresolved could damage the sector’s prospects. 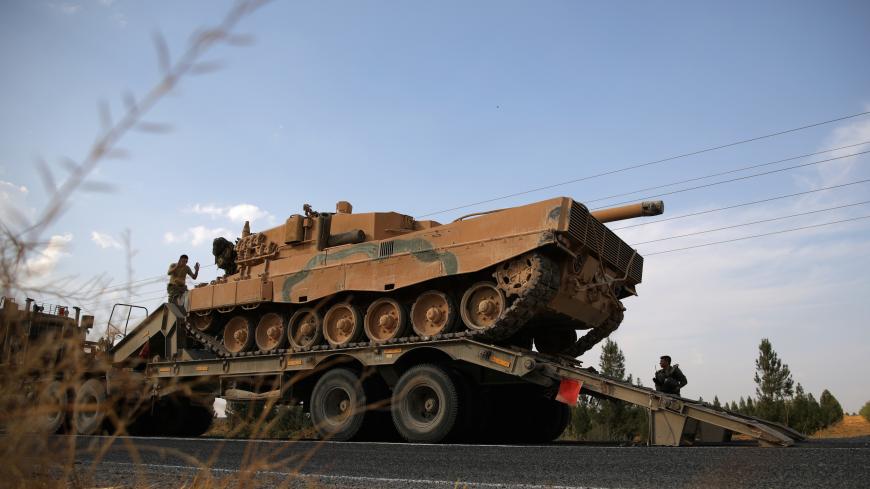 A Turkish army tank is unloaded on a road near the Turkish border town of Ceylanpinar, Sanliurfa province, Turkey, Oct. 18, 2019. - REUTERS/Stoyan Nenov

The fast expansion of Turkey’s defense industry in recent years might be becoming harder to sustain as newly released data show the sector is struggling to reduce its heavy reliance on foreign inputs and expand foreign clientele, despite growing investments in high-tech development.

Promoting local arms production has been a hallmark of President Recep Tayyip Erdogan’s government, based on the idea that Turkey needs stronger military deterrence to be a major regional power but cannot trust traditional Western allies for conventional weapons supplies. Keen to muscle up its foreign policy, the government has sought to enhance Turkey’s arms-development capabilities to achieve self-sufficiency and make the most of export opportunities to ensure sustainability.

Efforts to develop the national defense technological and industrial base are seen as an inseparable part of the diplomatic flexibility and international prestige Ankara believes to have gained in cross-border operations in Syria and Iraq since 2016. In Ankara’s eyes, the Turkish military continues to be a deterrent combat force in the region, so self-sufficiency in the defense industry remains a major priority.

Another aspect not to be overlooked is that the defense industry has become a distinct area for government grandstanding in domestic politics. Any new military product manufactured locally or sold to foreign buyers is being presented as some sort of political victory in the pro-government media.

Indeed, the Turkish defense industry made significant strides in the 2015-2018 period, creating a success story for Ankara. Yet, the 2019 performance report of the Defense and Aerospace Industry Manufacturers Association, released in late April, shows problems in this success story as a result of some structural problems.

According to the report, the industry’s turnover was some $10.9 billion last year, a 24% increase from nearly $8.8 billion in 2018. Foreign sales revenues rose 40% to over $3 billion from $2.2 billion the previous year. But, crucially, imports rose as well. They even slightly exceeded the worth of foreign sales, standing at nearly $3.1 billion, a 28% increase from about $2.4 billion in 2018.

The imports are overwhelmingly raw materials such as steel from Finland to make armored vehicles and intermediate products such as turboprop engines from Ukraine to make drones. The increase in imports is an alarming sign for the Turkish defense industry, underscoring its extreme dependency on foreign inputs. In other words, the increase in exports has relied heavily on imports.

Of note, some European defense industry companies slapped embargoes on Turkey and some European governments banned the sale of certain products to the country during Operation Peace Spring in northeast Syria in October and November 2019. Turkey’s campaign targeted Syrian Kurdish militia affiliated with the armed Kurdistan Workers Party group in Turkey, which Ankara considers a terrorist organization. Finland, for instance, halted steel exports to Turkey, while London suspended the involvement of British firms in Turkey’s first indigenous fighter jet project, which was already ridden with delays over engine problems. Germany, Italy, the Czech Republic, Norway and Sweden also banned sales to Turkish firms. A defense industry expert interviewed by Al-Monitor estimates that the embargoes related to Operation Peace Spring have cost Turkey around $1 billion in production losses.

Other figures in the report are more encouraging. Spending on research and development was up by more than 15%, reaching nearly $1.7 billion from some $1.4 billion in 2018. Research and development budgets have continued to expand since 2016, which is a promising sign for the future. The breakdowns show that spending on technology development, in particular, has shot up. The sum reached $249 million last year, increasing 67% from $149 million in 2018. The upticks speak of an increasing focus on high-tech advancement in the Turkish defense industry.

Yet the legal and bureaucratic framework on intellectual property rights continues to fall short of supporting this drive. Because of regulatory loopholes, many defense industry firms involved in research and development are embroiled in legal battles with each other over claims of intellectual property infringements. This spoils trust within the sector and deters firms from collaborating, forming joint ventures and jumping into bigger projects.

In another downside, new orders in 2019 totaled $10.7 billion, a decrease of more than 12% from the previous year. The drop, which came amid economic turmoil in Turkey, ongoing quality and trust problems in the sector and various crises stemming from Ankara’s foreign policy, shows that Turkish defense industry firms are struggling to find foreign markets and that the sector has a structural export problem. Given that the sector now supplies 90% of domestic needs, one may suggest the domestic market has reached a point of saturation. Without expanding foreign sales, Turkey can hardly sustain the expansion of the sector. Turkish defense industry firms will be fighting for contracts on the international market and the competition will be much more aggressive.

The next several years will be highly critical for the future of the Turkish defense industry. Whether it can get past the sustainability phase and grow into a global actor will depend on the decisions and steps that Ankara takes.