Will Raqqa be site for clash of titan generals?

Two admired military heroes of Iran and Turkey, both commanding elite military units in Iraq and Syria, could wind up confronting each other in northern Syria. 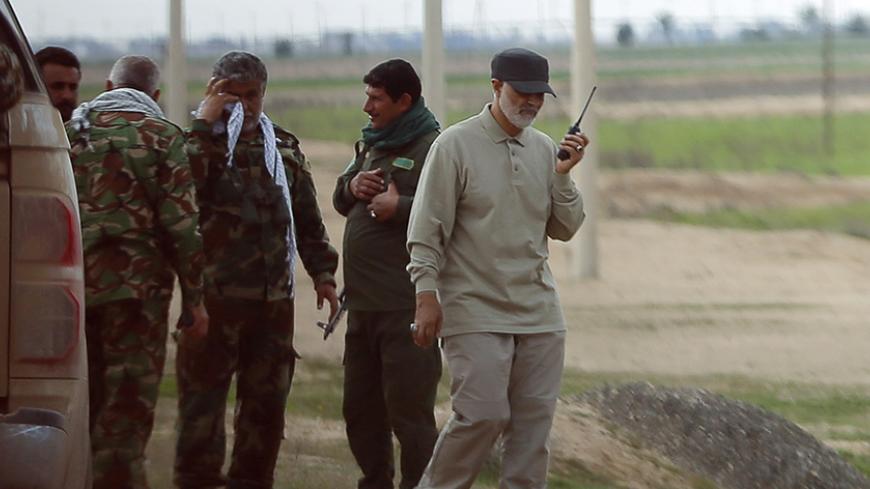 In this tale of two men, both are national heroes backed by unmatched political and popular support while commanding the best-equipped, most elite armed units in Iraq and Syria. More topically, both are now closely following the developments at al-Bab and preparing for their aftermath.

One of the two people I am talking about is already a well-known social phenomenon: Gen. Qasem Soleimani, known as “Iran’s sword in the Middle East.” Since 1988, he has been commanding the Quds Force of the Islamic Revolutionary Guard Corps. His every visit to Iraq and Syria becomes a social media event, with all his pictures and statements going viral.

Born in 1957 in a mountain village of Kirman province in southeast Iran, he worked in construction for a while and then joined the Revolutionary Guard. His official education is limited to elementary school.

The star of Soleimani, who proved his loyalty to the Iranian regime and revolution with his success in putting down the 1979 Kurdish uprising at Mahabad, truly shone in the Iran-Iraq War. Currently, the Iranian security bureaucracy is managed by generals who, like Soleimani, proved themselves in that war while amassing significant combat experience. The links between these generals set the course in Iran’s domestic politics and now also Iran’s policies in Iraq and Syria.

Even a brief Google search will yield enough information on Soleimani's reputation and achievements to impress anyone. For some, he is the shadow commander of Iran. For others, he is the conqueror of Aleppo — lately, he has been called "the architect of the victory at Mosul.”

But today Soleimani has a rival in Iraq and especially in Syria: Lt. Gen. Zekai Aksakalli, commander of the Turkish Special Forces (TSF), who is directly attached to the chief of general staff.

Aksakalli has been commanding the TSF, the Turkish military’s most elite unit, since 2013. His already impeccable reputation skyrocketed during the July 15 abortive coup, when he avoided capture by the coup plotters, then played a major role in thwarting the attempt. Because of his major success and the gratitude felt toward him, he was promoted to the rank of lieutenant general in July, even though rumors had circulated that he was going to retire in August.

Aksakalli was born in the eastern Turkish city of Erzurum in 1962. After finishing high school, he enrolled in the Army War Academy, where he made global achievements in cross-country track competitions. He was commissioned as a second lieutenant in 1984 and spent most of his career in commando units and combating the Kurdistan Workers Party (PKK) with the Special Forces Command, and then training the Azerbaijani military. He first became visible in the media in November 2014 when he visited the Azerbaijan-Armenia border. Photos of him aiming a sniper rifle became a hit in Turkish media. He was next seen on a national TV channel the night of the coup attempt, when his unyielding opposition to the coup attempt won the public’s admiration and confidence. Next, in August, we saw Aksakalli at Jarablus, Syria.

At Jarablus, Aksakalli was wearing standard military field fatigues with no rank insignia so he would appear to be a regular trooper to anyone looking through a scope from a distance. This month, Aksakalli was photographed observing the al-Bab region through binoculars, but this time he was dressed in military-type civilian clothes, as Soleimani does.

Today under Aksakalli, the TSF maintains about 15 liaison offices in Iraq’s Bashiqa, Zakho, Dahuk, Kanimasi and Bamerni. He is effectively in charge of the entire Operation Euphrates Shield.

Both commanders hail from modest rural backgrounds and have charismatic personalities. They don't have academic degrees and don’t conceal their nationalist inclinations. Both are supported by their own headquarters staff members who have been loyally serving them for a long time. Both are adored by the public and can count on full political support for their activities, especially in Syria. Both are tough soldiers who overcame many adversities in their military careers but also acquired impressive combat experience.

Both men excel in motivating their subordinates. They are experts in unconventional warfare. Their photos add to their charisma, but neither is a good orator. Both are strongly anti-US, and they see the United States as the source of all regional problems. However, that doesn’t make them pro-Russia, as their nationalist-independent ideologies are not a secret. Both prefer to be in the field instead of talking politics in Ankara and Tehran, constantly accessible to the media. Neither is really comfortable with rigid civilian political control. For example, in November, when the parliamentary inquiry commission on the coup attempt invited Aksakalli to come to Ankara to testify, he refused, saying, “I am fighting in Syria.”

It is well-known that Soleimani has been having persistent disagreements with civilian decision-makers in Tehran over the status, functions and responsibilities of Shiite militias in Iraq.

Meanwhile, the biggest difference between the two commanders is that they are commanding in Syria and Iraq the elite forces of two rival countries and their allied indigenous armed militias — making them rivals in the field. Although there has not been any armed confrontation between the national units and local militias they command, developments in northern Syria signal that this probability is not too far off.

Their military careers are not similar. Aksakalli is a uniformed military man who served in conventional units of the Turkish army, obedient to the chain of command with strict field discipline. Soleimani, however, frequently takes personal initiatives and achieved amazing status as a paramilitary civilian who could solve problems by himself.

Although it may sound much too speculative at this point, I think one way or another the paths of Aksakalli and Soleimani will eventually cross for the first time in northern Syria, particularly around Raqqa. If Turkey heads toward Raqqa after the capture of al-Bab, will there be clashes between the Shiite militias commanded by Soleimani and the Sunni Free Syrian Army elements controlled by Aksakalli?

I admit, it may difficult to answer now. But six months ago I was laughing off such an eventuality, and now I am seriously scratching my head over it.

Russia briefly withdraws from bases in north Aleppo, leaving SDF to face Turkey by itself