A hagiographic biopic on the life and times of Turkish President Recep Tayyip Erdogan is scheduled for release during the runup to the constitutional amendment that could expand his authority and entrench him in power. 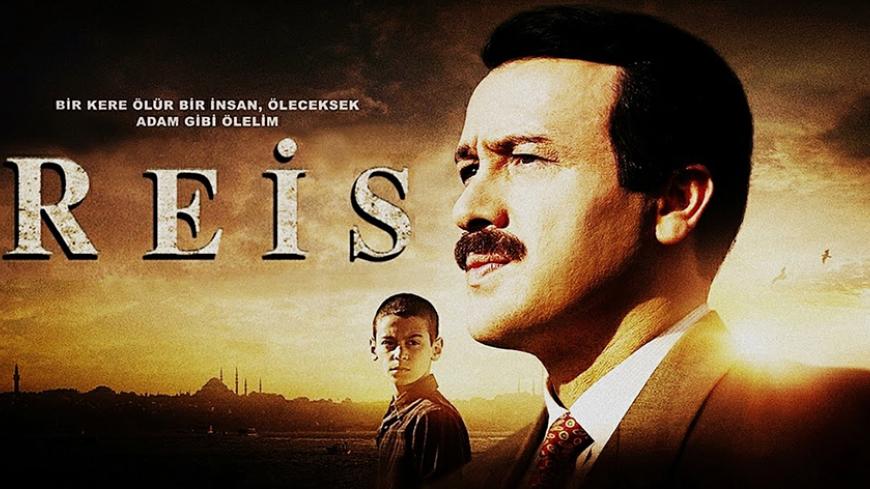 The poster for "Reis” ("The Chief"), which traces the life of President Recep Tayyip Erdogan and his rise to political power. Posted March 29, 2016. - YouTube/Gerçek ATATÜRKÇÜ

The much-anticipated “Reis” ("The Chief") — a biopic tracing the life of Turkish President Recep Tayyip Erdogan from childhood to the pinnacle of political power — premieres in Turkish cinemas March 3. Excerpts posted online leave no doubt that the protagonist is a larger-than-life hero. The timing of the launch is likely not inconsequential, coming as it does just weeks before the referendum on constitutional amendments whose sole purpose, in the eyes of many, is the consolidation and prolongation of "one-man rule" in the hands of Erdogan. In the bigger picture, “The Chief” is a film about the history of not just Erdogan, but of the Turkish Republic itself.

An early scene involves one of the most controversial prohibitions in Turkey's history — the ban on reciting the Islamic call to prayer in the original Arabic that was imposed in 1932 by the one-party, Kemalist regime and lasted until 1950, when the first free elections brought the opposition Democrat Party to power. “The Chief” covers the ban, abhorred for decades by Turkey’s religious conservatives, in a dramatic fictional fashion.

As the unpopular Turkish-language call to prayer is delivered from a minaret, a bold imam walks into the courtyard of a mosque and dares to recite the Arabic call to prayer. A soldier under strict orders to stop such “reactionaries” forces the imam to cease and beats him with his rifle. The man’s young grandson, however, proves his bravery and continues with the recitation, despite the menacing presence of the soldiers with their guns.

Another dramatic scene is set in the year 1961. Turkey is under the rule of a secularist military junta that has overthrown the democratically elected Democrat Party government. The young boy who bravely recited the Arabic call to prayer is now a pious Islamist with a “cause.” A truck full of soldiers heads into his modest neighborhood, where they break down his door and arrest him as he is praying. For added drama, the man's aged parents try to stop the soldiers and save their son. They are viciously thrown to the ground, in a scene reminiscent of Nazis in Holocaust films.

Meanwhile, a young boy in the neighborhood has been watching all this with sadness, but also with a certain wiseness, knowing that these dark days will pass. At that point, Erdogan's voice is heard reciting a line from a famous poem: “Don’t leave this nation without a hero, my God.” That boy is the young Erdogan, the very hero that “this nation” — Turkey’s religious conservatives — has been waiting for for a century. That, apparently, is the message of “The Chief.”

Many of the other emotion-laden scenes — such as Erdogan’s brief imprisonment in 1998 by another secularist, military regime — emphasize the same basic message: The good, religious, modest people of Anatolia defeated a brutal, vicious, secular establishment in Turkey thanks to Erdogan — the bold, brave, unyielding “Chief.” Erdogan’s exceptional personality is of course highlighted: He is afraid of no threat, including death, which he sees as “coming together with God.” He leads the people around him and instructs them on doing the right thing. He keeps all his promises, and is forever self-confident. He is tough against evil, but also compassionate toward the meek, the poor and the otherwise downtrodden.

Who made such a film? The Kafkasor Film Academy, a new enterprise whose portfolio apparently includes no other films, but whose first production involved considerable investment. It was shot in two countries (Turkey and Cyprus), in five different cities and has a cast of 3,000 actors and extras. The company's owner told the media that the budget for “The Chief” had been $8 million, which is quite a large sum in the Turkish film industry.

All in all, “The Chief” comes across more as a work of political propaganda than a biographical drama. Films about great political leaders are made in democracies, but typically after they have died or at least stepped away from power. An attempt is also often made to be balanced, acknowledging the failures of the historic figure in question as well as his or her achievements. “The Chief,” however, is all about praising Erdogan as he stands at the zenith of his power but wants to further expand and retain it. Critically, he is about to ask the nation whether they want an all-powerful Erdogan indefinitely.

Many of Erdogan’s supporters will likely be moved by the eagerly awaited film, whose trailers have had more than 130 million hits. The historical irony will probably be lost on most of them that the early Turkish Republic that they so despise was characterized not only by a heavy dose of secularism, but also by a cult of personality, not unlike their own, around Kemal Ataturk. In the 1930s, when Ataturk dominated Turkey, statues of him were erected across the country to the extent that the words “statue” and “Ataturk” became synonymous in the public's mind.

Now, a century later, Turkey has another cult of personality in the making, at the hands of the very people who for decades ridiculed the cult of Ataturk. Statues are out of fashion these days, but a much more influential form of art is available for the mission: film. “The Chief” is just the beginning. The producer has proudly noted that “The Chief II,” “The Chief III” and several other films are being planned for the series. They will all be launched on Feb. 26, Erdogan's birthday. After all, his birthday must be a special day for the entire nation.