After a short film promoting the commemoration of the Battle of Gallipoli was broadcast across Turkey, the Turkish media is buzzing with discussion, with many upset over what they see as the president’s blatant manipulation of military history for political gain. 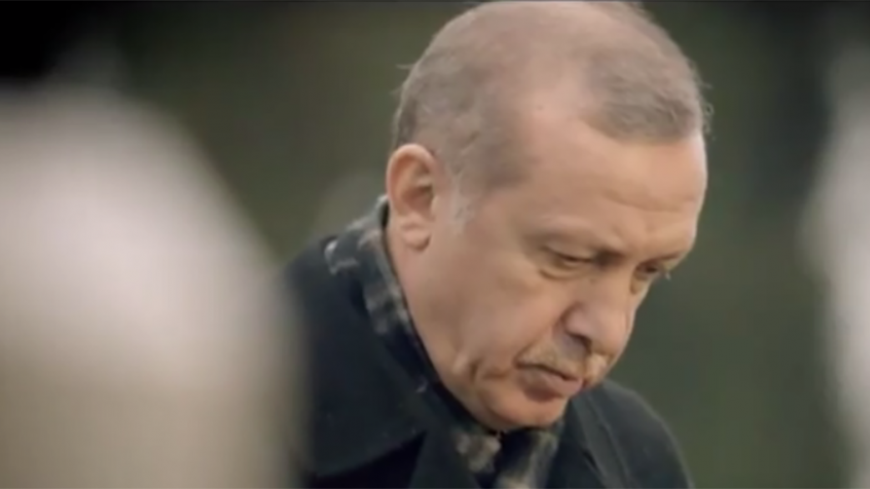 Turkey's President Recep Tayyip Erdogan bows his head in mourning in a still from the video "An Epic of a Hundred Years." - YouTube/Plus Medya

When President Recep Tayyip Erdogan’s mother died in October 2011, most Turkish television networks covered the funeral live. Millions of Turks watched Erdogan’s strict adherence to Islamist rituals at the cemetery, being the lead pallbearer, taking off his jacket and tie and sprinkling the first soil over the grave. I cannot forget the comments of my neighbor, a dedicated Erdogan follower: “Did you see it? The man is a prime minister but he is burying his mother just like us. Did you see him jump into the grave? I adore his authenticity.”

Since then, I have frequently thought of Erdogan’s "authenticity," his being down-to-earth. We may approve of him or not, but we have to admit that Erdogan’s intimate appeal to the conservative Anatolians who make up the majority of the voting constituency plays a major role in his political success.

On the night of April 20, millions of Turks watching television again saw Erdogan’s authenticity in an extraordinary promotional video. The three-minute “An Epic of a Hundred Years,” produced by the presidency and shown on all TV networks simultaneously, was about the 100th anniversary of the Battle of Gallipoli.

The video starts off with the question, “Have you ever heard the voices of martyrs?” For 70 seconds, you watch soldiers who fought and died at Gallipoli reporting to their commanders, “Yes sir, my commander, sir,” and their grandchildren of today walking out of their homes or places of business. The sights of "Nicolai of Istanbul," who symbolized the non-Muslims who fought at Gallipoli, of 1st Lt. Ragip, who had lost his right arm, and a stuttering soldier who could hardly talk reporting to his commanders were heartbreaking.

Then appears a Turkish soldier chanting the Islamic call to prayers facing the Allied fleet lined up in the Dardanelles Strait, an allusion to Turkey’s collective theme of “challenge of faith against steel.” At the two-minute mark, the video, which until then was regular Gallipoli coverage, suddenly changes when a voice we are well acquainted with overrides the call to prayer. That was Erdogan, reciting a poem titled “Prayers” by Arif Nihat Asya, one of the leading ideologues and poets of Turkey’s nationalist-Islamist tradition. Here is its English rendition:

We all have a hoarse voice, do not leave

our minarets with no calls to prayer, my God!

Either bring us those who make honey

or do not just leave us with no hive, my God!

Do not take the Milky Way away from our skies, my God!

Do not leave this country, which was kneaded by Muslims,

with no Muslims, my God!

Give us strength, do not leave the field of jihad

with no wrestler, my God!

Do not leave these masses, who look for a hero,

with no hero, my God!

Let us know how to resist the foe,

do not leave us lifeless, my God!

On the path to tomorrows, do not leave

our years with no Ramadan, my God!

Either disperse your herd, if left unattended,

or do not leave them with no shepherd, my God!

Do not leave us, O, with no love, no water, no air

and with no country, my God!

The video certainly impressed the conservatives of Turkey with Erdogan’s masterful use of his voice and a string of eloquent visual messages. At the beginning of the poem, Turkish soldiers are seen preparing for an attack in their trenches and then charging under heavy enemy fire. Almost simultaneously, their grandchildren, visibly proud of the sacrifices of their grandfathers, march forward with the same decisiveness. The attack of the soldiers on the front is understood to have succeeded, as we can see them led in prayer by their commanders with the Ottoman flag behind them. Then, at 140 seconds, we see a martyrs cemetery and understand that their grandchildren had been marching so proudly and determinedly to the graves of their grandfathers. The marching crowd is a cross-section of young and old, rich and poor. One by one, we see them opening their palms in prayer. Soon, a hand extends to put flowers on a grave. The camera pans to show us it belongs to Erdogan. Just as he opens his palms to pray for the souls of the martyrs, it starts to rain, a sign of fertility and abundance by the people of Anatolia. In Anatolian folk culture, rain during a cemetery visit is a sign of good tidings. Erdogan doesn’t even notice the rain, and keeps reciting his prayers. His bodyguard, who normally would be holding an umbrella over him, is not visible because that would be construed as disrespect of the cemetery. Erdogan peacefully concludes his prayers and is replaced on the screen with a fluttering Turkish flag. Then Mustafa Kemal Ataturk, in military uniform, appears in a photo accompanied by “Yes sir, yes my commander."

The video concludes with the message: ”We remember our martyrs and fighters with gratitude on the 100th year of the Gallipoli Victory,” and ends with the logo of the presidency.

After the video was over, I asked my nationalist wife, who doesn’t really approve of Erdogan’s views, if she was touched. She replied, “Of course I am. With this film, the president has touched all the sensitive neurological points of the Anatolian people.” A retired military friend called me immediately and declared, ”With this film, Erdogan has taken over the legacy of Gallipoli and the dignified history of the Turkish army and thus became a full-fledged commander in chief.”

The social media debate that followed was representative of a polarized Turkey, pro- and anti-AKP. The pro side added commander in chief to Erdogan's leadership qualifications. The anti-AKP side had three basic gripes. Some were upset that a national legacy like Gallipoli was used for Erdogan as cheap publicity. Others complained that this was but blatant election propaganda, and the last group called attention to the contradictions between Istanbul’s non-Muslim soldier Nikolai and the emphasis on Islam in the video.

There is no doubt that the video, aired at prime time and on all TV channels simultaneously, had once again transmitted Erdogan’s authenticity to our homes with themes of history, military victory, soldiers and Islam. For the conservative majority of Anatolia, the video had one clear message: Erdogan is the commander in chief of the New Turkey.

In my earlier articles I had written that the pillars of Erdogan’s "New Turkey" were charismatic leadership, national will, a strong military and a strong defense industry. But it is now clear that Erdogan, in his quest for a presidential system, will not rely only on political virtues to boost his personal charisma, but will also heavily use history, especially military legends.