How Erdogan used the power of the mosques against coup attempt 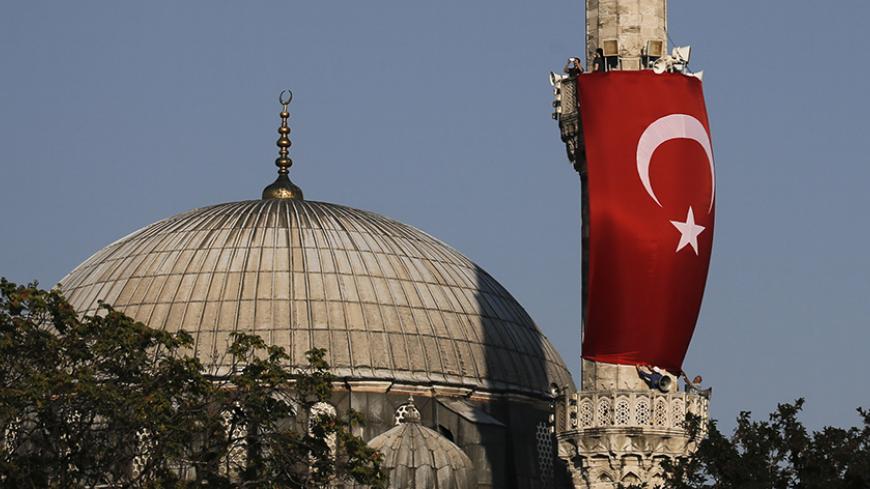 A Turkish flag is seen next to the dome of a mosque in Istanbul, Turkey, July 16, 2016. - REUTERS/Alkis Konstantinidis

In the first hours of the failed coup attempt on July 15, the pro-government figures that appeared on television called upon the Religious Affairs Department (Diyanet) to rally the Turkish people in defense of democracy. Turkish President Recep Tayyip Erdogan, along with Mehmet Gormez, head of the Religious Affairs Directorate, Turkey’s official religious body, encouraged people to take to the streets to show solidarity against the military coup attempt. Before midnight on July 15, Gormez had issued an order to all imams of the Turkish Republic to go to their mosques and call upon the people to do the same.

This is when the public heard the first sala prayer being read at mosques around the country almost simultaneously all night. Traditionally, sala prayers are read to announce a funeral at the mosque.

During the Ottoman era, sala prayers were called to announce difficult times during wars. The voice of the imams is known as the single voice that has the power to reach all the people instantaneously. However, with the demise of the empire and the establishment of the secular Republic, sala prayers have not been heard in times of distress in Turkey.

On July 15, Diyanet sent a text message to the phones of 110,000 imams, who are government employees themselves, asking them to recite the sala prayer at 85,000 mosques. Some imams just read the sala prayer periodically, while others also read announcements to the public informing them where to assemble and encouraging them to be courageous. In more pious and active neighborhoods, when the imam called Takbeer (a call during distress and war), the people passionately replied Allahu Akbar (God is greatest) while marching on streets.

On the scary night of the coup attempt in Ankara and Istanbul, as F16s flew low with deafening sounds in the midst of gunshots and bombs exploding, hearing the voice of a human calling upon a greater power had a soothing effect even on those who are not observant Muslims. Dozens of the diverse people I spoke with in Ankara and Istanbul said, “Two voices helped me through the night: One was Erdogan’s, and the other was the imams'.”

Several pundits penned pieces praising Diyanet’s brave stand during the coup attempt. For example, Mustafa Unver, a scholar of theology, wrote that it was a blessing that those who attempted the coup did not try to occupy the mosques, but rather targeted the television and radio stations.

Yet not everyone was happy about the involvement of Diyanet in the civilian resistance against the coup. In both Izmir and Istanbul on that eventful night, attacks on mosques for reciting the sala prayers have been reported. Once the coup attempt was suppressed, police forces investigated and found those who attacked the imams and arrested them. In addition, some imams failed to follow the orders. In the following days, those imams were taken into custody.

Important critical voices have been heard on social media. Muharrem Ince, a seasoned opposition parliamentarian from the Republican People’s Party (CHP), tweeted, “The call to prayer is not just a call to pray, but it is also a sign of our freedom, independence and our claim to this land. Same is true with the sala prayer. But I cannot stand it anymore that the mosques have become the backyard of a political party.”

Melda Onur, former parliamentarian from the CHP, tweeted, “For the last 45 minutes sala prayer is being read nonstop. From now on when we have a funeral we will mistake it with a coup or vice versa.”

Levent Gultekin, a prominent columnist for Diken website, tweeted, “The coup is repelled, suspects are taken in custody. So why are they still calling the sala prayer, encouraging people to the streets. What is wrong with you guys?”

The secular sections of society, although remaining mostly quiet, were rather perplexed about the sala prayers, Allahu Akbar chants, and how the concepts of democracy and jihad can be used interchangeably with such ease. One staunch secular professor of economy, who asked to remain anonymous, told Al-Monitor, “I did not even know what the sala prayer is, to be honest. We first thought the chants from the mosque was ezan [call to prayer]. I would have gone out to the street against the coup. However, I saw the images of men with long beards and knives on television and heard the chants for jihad. Frankly, I am as scared of Islamists as I am of soldiers. Currently, the situation feels like lose-lose for secularists in Turkey.”

Mahmut Kar, Hizb ut-Tahrir’s media bureau chief, provided a poignant analysis for Al-Monitor: “The call to resist against the coup against the terror was not made from the loudspeakers of the municipalities, but from the mosques to the public. The role of Diyanet against the coup attempt is crucial, because from midnight till dawn we heard the sala prayers from the mosques. In no city can you see people screaming ‘democracy’ and marching towards the tanks, the believers courageously stood against bullets chanting ‘Allahu Akbar.’ Although media may try to portray this as a ‘victory of democracy,’ thanks be to God they did not succeed, because the impact of the calls from the mosques is potent on the people.” Also highlighting the public’s reaction was a strong message to Erdogan that “people love Erdogan, not because of democracy but because of Islam. Now everyone saw against the power of believers, tanks and bullets are meaningless,” he added.

Zeynep Bozdas, foreign relations adviser for the Free Cause Party (Huda-Par), gave Al-Monitor her personal viewpoint rather than that of her political party. Bozdas, an observant Muslim, said, “I think July 15 is a turning point in the relations between Diyanet, the public and the state. Diyanet clearly stood by the people, going against the statist edict ‘state and religion are separate.’ Diyanet destroyed this motto by taking an active role against any sort of military rule.” Several pious Turks compared Turkish Diyanet to Egypt’s Al-Azhar arguing Diyanet stood tall with the people against the power of the bullets tilting the balance.

After the coup, Diyanet announced that it will not provide Islamic burial services to the coup suspects. Those who are believed to be involved in the coup were denied burial places in Muslim cemeteries. Some of the families did not claim their bodies, while others were obliged to bury the bodies in their backyards. Those who had fallen dead — either soldier, police or civilian — fighting against the coup were declared martyrs, and the government agreed to provide them with all due financial and procedural martyr’s status.

As odd as it may be while the mainstream media and most of the government elites portray the civilian resistance to the military coup attempt as a victory of democracy, neither pious Muslims nor staunch secularists agree. Both of these groups believe the reciting of sala prayers from the mosques were a call to jihad. While secularists are scared, observant Muslims and Islamists find comfort and encouragement in knowing that Diyanet is now out of the closet.

Diyanet has been a growing force in Turkey on multiple fronts, but the July 15 coup attempt has made this fact official. Diyanet’s power has resisted that of the armed forces as never before in Turkish history. The next step will be to see how those in religious garb and soldiers in uniform play out their redefined power relations.