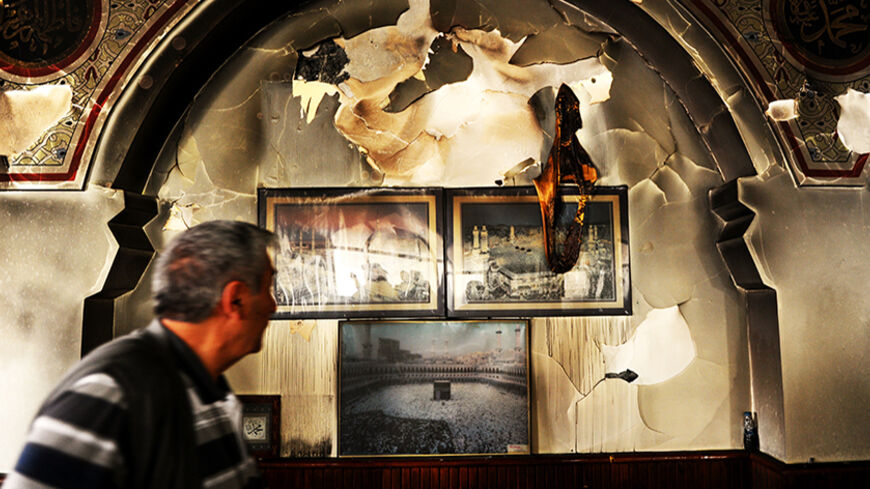 A man walks past burnt religious pictures at the Shiite Muhammediye Mosque in Istanbul on July 8 , 2014. - AFP/Getty Images/Ozan Kose

On June 13, the small daily Yeni Mesaj reported an arson attack on the Shiite Allahu Akbar Mosque, in Istanbul's Esenyurt district. The reportedly unknown perpetuators struck after midnight, setting fire to the mosque’s library. Turkey's mainstream media failed to pick up on the incident until July 8, after another Shiite house of worship, the Muhammediye Mosque, was attacked in the same district. Both incidents took place in the middle of the night, involved arson targeting the mosques' libraries and caused serious material damage but no loss of life.

Hamza Aydin, Muhammediye's imam, told Al-Monitor, “Prior to the attack we had some suspicious visitors at the mosque. Initially, they just asked questions. Later, they made offensive comments. I reported one of them to the police. This man told me, 'You practice idolatry. We will not let your ezan [call to prayer] be heard in this country.'” Aydin further explained, “The mosque had no working security cameras at the time, so the police told us they could not follow up on the issue. Afterward we had the arson attack, which burnt several books, along with copies of the Quran.”

Turkey’s Shiites — called Jaafaris, a name honoring the sixth imam, Jaafar-i Sadek — have approximately 70 mosques in Istanbul and some 300 throughout the country. To put their number in context, one should consider that there are nationwide almost 85,000 government-sponsored mosques, which receive financing through the Religious Affairs Directorate. Thus, the Jaafaris' presence is minuscule in comparison, but they have, however, managed to so far maintain independence from the Religious Affairs Directorate. They receive no state funding for their mosques and imams.

Previous slander and threats and now the arson attacks represent troubling messages for the Jaafari community, especially following the escalation of sectarian war in Syria and Iraq and the emergence of the Islamic State (IS, formerly the Islamic State of Iraq and al-Sham, or ISIS). The left-leaning daily Yurt reported on the arson under the headline “ISIS burnt down a mosque in Istanbul.”

Kadir Akaras, chairman of the Ehl-i Beyt Scholars Association, told Al-Monitor, “Burning down mosques, prayer houses, is a concept alien to our culture. It is an imitation of the Salafi [extremist] groups’ behavior in the Middle East. Not only in Esenyurt but also in multiple other locations, the Jaafari community’s mosques and masjids [smaller houses of prayer] are under threat. The cause of this threat is that the government has failed to stand by its Jaafari citizens and consider these acts as hate crimes. Unless prompt and determined policies are enforced, there is potential for the further escalation of conflict along sectarian lines. For decades, the country battled Kurdish-Turkish identity issues, now the fault lines are becoming sectarian lines. Following the developments on our borders, unless we are vigilant, we view this as a concern to be taken seriously.”

Aydin, the imam, was more optimistic than Akaras, telling Al-Monitor, “I do not want to believe there is potential for a sectarian rift in our country. Where we live, we have very good relations with our neighbors. When the mosque was attacked, it was a Sunni neighbor who called us and the police. After the incident, all of our neighbors came out in support of us. We do not see ourselves as different. There are days we all pray together as a community, and we care about the same issues. Our Sunni neighbors respect our beliefs, our mosques, as we have the same respect for theirs. For us, all houses of prayer are holy and should be respected.”

When asked about the future, however, Aydin confirmed that the community is deeply concerned and angst-ridden about the recent events, particularly as it is the holy month of Ramadan. He believes that private and state security measures should be expanded. Aydin was quite appreciative of Mehmet Gormez, head of the Religious Affairs Directorate, for paying a visit to his mosque on July 10 immediately after the attack. Gormez was not apologetic about the horrid event, but made it clear that Sunnis and Shiites are both Muslims, and despite differences in practice and some beliefs, it is unacceptable to attack each other.

Gormez stated, “We will rebuild the mosque together. We will replace the burnt books in the best possible way together. Then we will gather here again and pray together.” This is a noteworthy statement from a government representative given that in March 2014, Turkish Prime Minister Recep Tayyip Erdogan went on record saying, “These people [Gulen movement members] have three major characteristics. They practice taqiyya [religiously sanctioned dissimulation], they lie, they slander. As a result, they are involved in sedition, malice. They are much worse than Shiites. Shiites cannot compete with them.”

At the time, Jaafaris demanded and expected a formal apology from the prime minister. Pundits are now recalling his words, questioning whether it was a slip of the tongue or unrepentant prejudice against Shiites. Jaafaris and others in Turkey are asking how things got to the point where someone is demanding that Jaafari mosques be closed down, their call to prayer silenced. One Salafi youth, who insisted that he is not a takfiri, a Muslim who accuses another Muslim of apostasy, said to Al-Monitor, “Did you ever listen to the Jaafari ezan? It is different, and it is not ezan really, which is why we do not want it recited out loud. This is not pure Islam. They are on the wrong path.”

The basis of the prejudice and hatred toward Jaafaris and Alevis in Turkey rests on the idea that Jaafaris have “deviant” beliefs and must therefore be taught “the right way.” A recent example was reported from Igdir province, home to a significant Jaafari population, where the mufti (Muslim legal expert) informed the Religious Affairs Directorate that the Jaafari imams needed to be educated by the government, otherwise they could pose a threat to national unity.

Following regional developments over the last three years — the Syrian civil war, sectarian warfare in Iraq and the emergence of IS in Syria and Iraq — both the Alevi and Jaafari communities in Turkey have become victims of added scrutiny and prejudice. The Jaafaris in particular suffer from the constant and ignorant attributions in the mainstream media of being “spies, traitors, untrustworthy.” Simply being Jaafari can suffice for one to be suspected as an “Iranian spy.”

The People’s Democracy Party (HDP) has introduced the issue of the Shiite mosque attacks in the Turkish parliament, asking serious questions of Interior Minister Efkan Ala. Despite a few public gestures and high-profile visits, the ruling Justice and Development Party is still seen as being ineffective in trying to calm the fears of Jaafaris. The HDP’s questioning highlighted the most pressing matters at hand: Why has no one been taken into custody after two arson attacks on Jaafari mosques and multiple verbal threats against the Jaafari community. What progress has been made on the arson in June?

One is left to wonder when the prime minister will consider it the right time to condemn these attacks.