Turkish President Recep Tayyip Erdogan's choice to have small children read politically charged poetry and prayers in the parliament was a brazen embrace of religious nationalism. 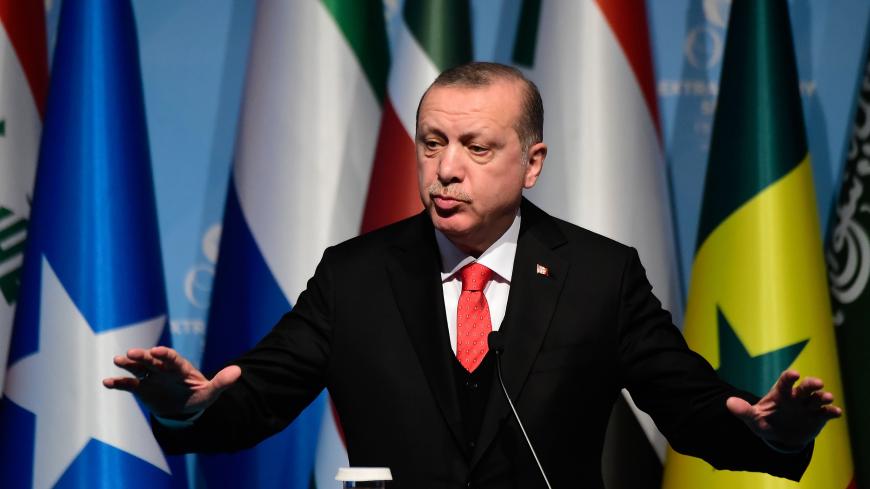 It is customary for the leaders of Turkey’s political parties represented in the parliament to address their members and rant about the burning issues of the day. In that way, yesterday was no exception — but it was extraordinary.

Recep Tayyip Erdogan, the president of Turkey's notionally secular republic, stood over a pair of little girls flanking a little boy as they proceeded to recite nationalist poems spiked with heavy dollops of Islam in front of the speaker's podium. Set against the tidal wave of Islamic nationalism engulfing Turkey, there was nothing singularly unusual about that.

But one of the little girls — she looked not a day older than six — was being paraded by the president in a snowy white hijab covering her head and shoulders and a matching ankle-length dress.

With a red satin ribbon emblazoned with “Turkey” wound around the child’s head, the outfit certainly captured the so-called Turkish-Islamic synthesis that has prevailed over Turkish politics since the days of the Young Turk revolutionaries. And military-inspired bans on the Islamic-style headscarf in the parliament, universities and government offices are a thing of the past.

Yet even the most open-minded pro-secular liberals saw yesterday’s bizarre display as a step too far: The president had formally sanctioned the covering of little girls. It was no accident that she was the first to recite a poem. He beamed with patriarchal pride as he handed her a microphone.

The verses she recited and concluded with a loud “Allahu akbar” were composed by the proto-Turkish nationalist Ziya Gokalp, a Kurd — the very same ones that landed Erdogan briefly in prison in 1997 and cost him his seat as the metropolitan mayor of Istanbul: “The minarets are our bayonets, the domes our helmets, the mosques our barracks and the faithful our soldiers.”

Turkish prosecutors swooped on his public recitation of these lines as proof that he was inciting religious hatred and locked him up for four months. Islamists and their former liberal allies flocked to his defense, citing freedom of speech.

Today, Erdogan’s government is locking up anyone who is even mildly critical of its actions. At least 150 journalists and scores of democratically elected Kurdish mayors and lawmakers are among them. Just today university student Helin Yigit was arrested and jailed for social media posts in which she took aim at Erdogan. Estimates vary, but around 132,000 people are thought to have been detained and 64,000 others arrested since 2016 coup attempt, mostly on thinly evidenced terror charges.

The climate of fear is growing thicker by the day. A young pro-secular urbanite described it in a private chat group thus: “I didn’t feel this constrained even a few months back. Everyone is terrified. Now I go to the theater or an art show: It’s all imbued with politics. Since we cannot have normal political discourse it seeps into all other arenas to the point where even the most simple acts are viewed in a political prism.”

Erdogan was making no bones about where his political affections lie. The second poem, delivered by the other little girl, was by Necip Fazil Kisakurek, an unabashed anti-Semite and Islamist who embraced many of the tenets of 1930s European fascism. When this reporter asked Erdogan in a 2002 interview whom he considered to be his role model, he replied without hesitation: “Necip Fazil Kisakurek.”

Not everyone was impressed. A prominent conservative thinker who sought anonymity noted in a telephone exchange with Al-Monitor, "Trotting out children for propaganda purpose is typical of dictatorships like North Korea." He added, "Business with Israel is booming, by the way."

The finale rendered by the little boy was a verse from the Quran typically read at funerals. “He wants to say a prayer for our martyred soldiers,” Erdogan noted approvingly. His prime minister, Binali Yildirim, screwed his face up in a gesture of barely retained tears. The boy completed the prayer. The president planted a kiss on his head.

“Amin,” the boy cried. “Amin,” the audience roared. The children scooped up their rewards — dolls for the girls, a car for the boy. The show was over.