To understand the current political psychology among Turkey’s religious conservatives, you must see the new three-minute propaganda film Erdogan’s team launched in preparation for the presidential elections. 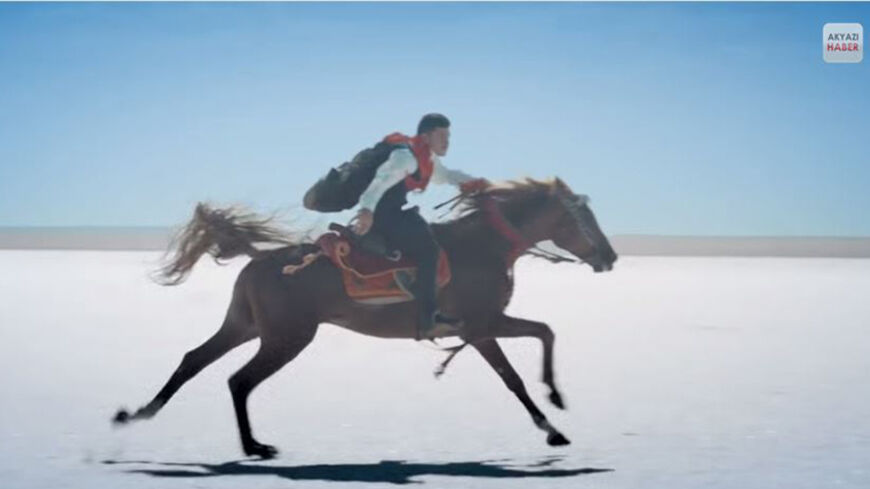 Turkey will have its presidential election on Aug. 10. Prime Minister Recep Tayyip Erdogan is one of the three candidates, and by far the leading one, according to various polls. Therefore, his election to the presidency would come as no surprise.

But many in Turkey wonder where exactly the country will head to once Erdogan becomes president and transforms this traditionally symbolic post into an all-powerful seat, because it is clear that Erdogan’s ambitions are far bigger than any of the previous elected Turkish politicians. He and his supporters see his presidency not just as a mundane change of seats, but as a historic revolution that will seal a century-long era in Turkish history and open a whole new one.

To put this political psychology of the Erdogan camp in a nutshell, you must see the new three-minute propaganda film Erdogan’s team has launched in the days before the election. With professional cinematography and an emotional tone, the film underlines the basic theme of the Erdogan campaign: Erdogan is the embodiment of his nation, and his victory will be nothing but the victory of “the people.”

The film begins with a scene in a remote village in Turkey’s heartland, showing an elderly Muslim woman performing her prayers. She then opens her closet, taking out an apparently most precious gift. Wrapped carefully in red satin, the gift is given to her son, or son-in-law, who then starts to run to take it to an unknown destination. Then you see many other Turks, similarly wrapping their gifts in red satin and giving them to their sons, some of whom are horsemen, who all head to the same destination in an epic, if not sacred, sequence. (No wonder the film was banned by the judicial body of the Higher Election Board after its release, because it utilizes “religious symbols,” which is prohibited by law in Turkish election campaigns.)

The first time I saw this clip, I had thought that the wrapped gifts were copies of the Quran, because such care is usually shown in the Muslim culture only to the scripture. Yet as you come to the end of the clip, you realize that these are in fact the golden stars that constitute the emblem of the Turkish presidency. While the stars are pinned one by one onto the emblem by the people, Erdogan suddenly appears, holding the largest star, pinning it at the emblem's center, and then opening the gates of “Cankaya,” the Turkish equivalent of the White House. Behind him, “the people,” with all their colors, also enter Cankaya en masse.

During this three-minute video, the only lyrics are a poem by Sezai Karakoc, a famous philosopher and poet in Turkey’s Islamist camp, and it is recited by none other than Erdogan. The poem, with very emotional and ambiguous terms, tells us about the longing for a great redemption.

All this symbolism is very meaningful, and it tells us a lot about the political vision Erdogan now offers Turkey. Accordingly, the Turkish nation, whose values are best represented by the religious conservatives who support Erdogan, has been oppressed for more than a century by a secular, Westernized, arrogant elite. But the nation, finally, has been able to topple this “tutelage system,” making “the people’s power” the only game in town. It is, in other words, the first time that Turkey is achieving “full democracy,” and Erdogan’s unstoppable ascent to power is the zenith of this revolution.

No wonder Etyen Mahcupyan, a Turkish-Armenian intellectual and one of the key thinkers in the pro-Erdogan camp, had recently coined the term “people’s revolution” to define the Erdogan-led transformation in Turkey. According to Mahcupyan, this was nothing but the consolidation of democracy, and thus it should be welcomed by all.

However, there is a not-so-bright spot in this “democratization.” The “people’s revolution” that Erdogan spearheads, like most other revolutions, also has invented various “enemies of the people.” Certain social groups that resist the Erdogan revolution — the secularists, the Gezi Park movement, “the interest rate lobby” and especially the Gulenists — are depicted as such. In this campaign, Erdogan has repeatedly defined his opponents as an “axis of evil” (in Turkish, “ser cephesi”). Some of his supporters condemn Erdogan’s main opponent in this race, Ekmeleddin Ihsanoglu, not just as a political rival, but a “project” cooked up by the “axis of evil” to halt Turkey’s progress.

This bitterly divisive rhetoric is exacerbated by the vision that sees Erdogan as the embodiment of his people. Propaganda posters put up all around Turkey define him as “the man of the nation.” Another popular poster reads, “The nation will not bow down, and Turkey will not be defeated,” with a giant and defiant photo of Erdogan. Other key themes used in the Erdogan campaign are “power” and “will.”

There is no doubt that this triumphal rhetoric is inspiring most of Turkey’s religious conservatives, who have indeed been oppressed and humiliated for almost a century by a secular and growingly narrow-minded elite. The conservatives’ liberation, in other words, should be only welcome. The problem, however, is that the same triumphalism brings only worry, if not fear, to the millions of Turks whose political preferences fall into to the “axis of evil” category. They fear that they will become the new underclass, if not the new enemy within.

Therefore, Erdogan’s victory, and the “people’s revolution” it implies, will not be enough to make Turkey a liberal democracy, if by this we mean a system of equality, liberty and pluralism. Erdogan will also have to reconcile with the social groups he has antagonized in the past couple of years. Otherwise, like another famous politician who declared war on “the axis of evil,” he will be able to win the war, but not the peace.