Turkish Prime Minister Recep Tayyip Erdogan has tired of joining Europe, and aspires to "Putinize" Turkey not only by veering toward Muslim Asia but also by joining the Shanghai Cooperation Organization. 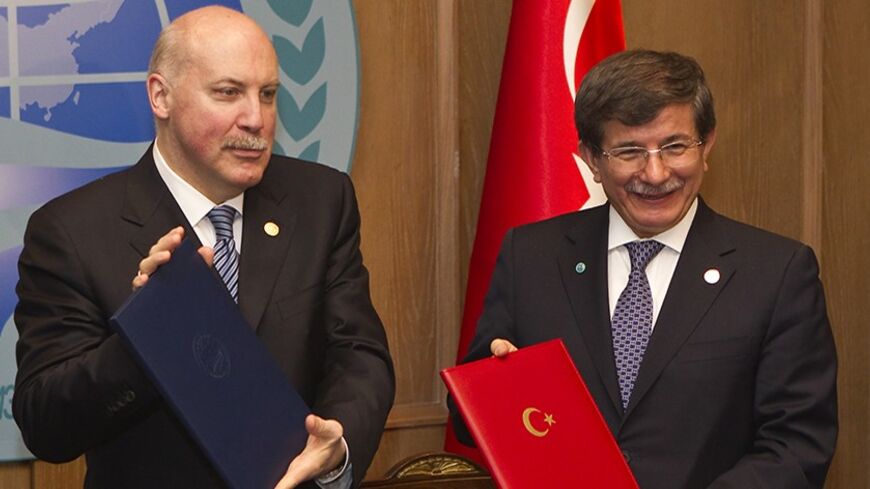 Turkish Prime Minister Recep Tayyip Erdogan is in the throes of an intensive election campaign these days. He moves around in a seeming frenzy from one election rally to another, giving speeches, preaching and mostly lashing out at anyone who doesn’t think like him.

Erdogan is giving his all to help candidates of his Justice and Development Party (AKP) win in the March 30 local elections, which he has targeted as a show of force, proof of his political power in light of the growing criticism against him at home and abroad.

This week, the anti-Erdogan protest movement raised its head once more, with tens of thousands taking to the streets of Turkey’s major cities to demonstrate against everything he represents. The protests followed the death of 15-year-old Berkin Elvan, who was injured during the Gezi Park protests in May 2013 and had been hospitalized since in a coma.

Thousands turned out for the boy’s funeral, where his mother wailed, "It's not God who took my son away, but Prime Minister Erdogan." At the very same time, Erdogan told participants at an election rally, “These demonstrations, following the boy’s death, are not democratic,” and accused his opponents of terrorism. At an election rally in the town of Siirt, he defiantly read a jihadist Islamic poem: "The minarets are our bayonets, the domes our helmets, the mosques our barracks and the faithful our army." He reminded the cheering crowd that many years ago he had served a prison sentence for reading that poem in public.

But Erdogan no longer advocates freedom of worship and speech. Now he advocates what seems to be a personality cult.

The EU recently issued numerous condemnations and expressions of concern in the wake of the revelation of corruption scandals in Turkey, Erdogan’s blatant intervention in the law enforcement system and the limits he has been imposing on freedom of speech. This week, the EU sought to remind him that as part of its accession process into the Union, Turkey “undertook to respect the rule of law.”

Brussels has been ignoring the fact that Erdogan abandoned the road to Europe, not only in deeds, but in words and declarations as well. At the end of last year, in November 2013, he stood next to Russian President Vladimir Putin in Moscow and urged him: “Save us from the European Union and take us to Shanghai.” There are those who regard the Shanghai Cooperation Organization (SCO) — which promotes economic, political and security cooperation among Russia, China, Kazakhstan, Kyrgyzstan, Tajikistan and Uzbekistan — as the Putinesque answer not just to the EU, but to NATO, too.

By so doing, Erdogan made clear that he is not leading his country to European liberalization but to Russian Putinization — Erdoganization, in Turkish.

How did someone who was the source of hope for devout Muslims and liberal secularists turn into a controlling, authoritarian leader who tramples on human rights — an Erdoganist?

For many years I’ve surmised that Erdogan was conducting a “hidden agenda.” In his mind’s eye he doesn’t see a democratic Turkey, a member of the EU, I argued, but an Islamic state released from the grip of the Kemalist secular establishment. In order to achieve this, he advanced the reforms required of Turkey to be accepted into the EU. But after totally neutralizing the influence of the Turkish military as the “gatekeeper of secularism,” and once winning almost 50% of the votes in the 2011 general elections, Erdogan changed direction. He was no longer guided by a calculated Islamist agenda, but by personal whims.

Allow me to posit that the turning point occurred in January 2009, at the annual Davos World Economic Forum, when the Turkish prime minister was invited to take part in a panel discussion with Israeli President Shimon Peres. Despite feeling betrayed by his Israeli ally, following the Israel Defense Forces' (IDF) invasion of Gaza in Operation Cast Lead, Erdogan showed up and took the opportunity to attack President Peres and the State of Israel for its operation in Gaza. In Turkish political folklore, the incident has been dubbed “One Minute” — a reference to Erdogan’s words in English to the panel moderator David Ignatius who tried to cut him off.

That “minute,” considered the turning point after which Israeli-Turkish relations started a steep decline, is also a turning point in Erdogan’s political thinking and personality as a leader.

In Peres’ entourage there were those who were under the impression that Erdogan’s words were not a spontaneous emotional outburst, and had been planned in advance. Even if they are right, no one could have foreseen the extent of the “success” with which the Turkish prime minister’s move was met at home and throughout the Muslim world. Protesters carried his photo in demonstrations held in Arab states. Parents in Arab and Islamic states started naming their sons after him as a token of appreciation for his deeds.

Erdogan, whose vision was to restore Turkey to the regional and international standing it enjoyed in the heydays of the Ottoman Empire, by, among other things, making peace between Israel and its enemies, suddenly realized that he could gain much more substantial and speedy recognition as a standard bearer of criticism against Israel.

It was only natural that he support the Gaza empathy flotilla of 2010, known as the Mavi Marmara flotilla, and although it stands to reason that he did not foresee the tragic results of the IDF’s seizure of the lead vessel, he was quick to take advantage of the grim circumstances for his own needs. The results were not long in coming. Erdogan kept going up in the polls conducted in Arab and Maghreb countries as the most admired figure in the world.

Erdogan fortified his standing as the hero of the Arab world — the Saladin of modern times. The popularity he gained as a result of his stand at the forefront of the criticism against Israel apparently may have gone to his head. But his run on this score may have played out, so he has turned East, where his approach may flourish better in Asia.