The political narrative about the failed July 15 coup attempt is entering Turkey’s textbooks as the core of a new shape of Turkish nationalism. 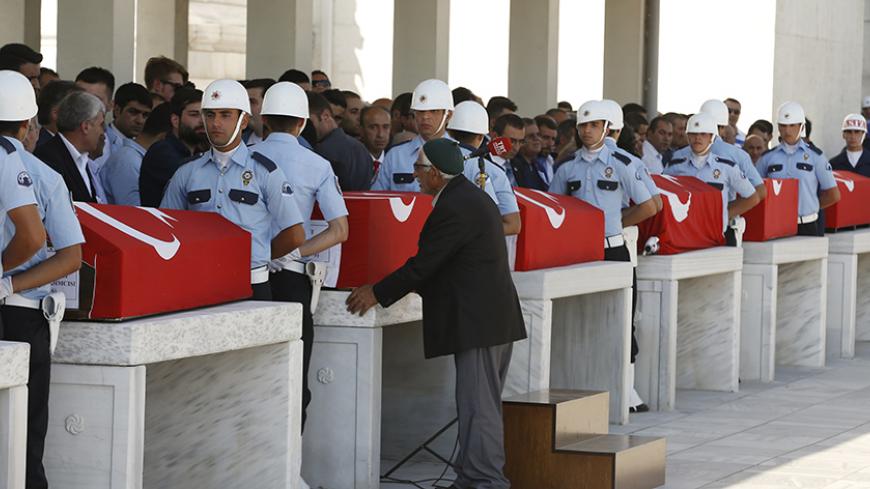 Soldiers guard coffins of victims of the thwarted coup during a funeral service in Ankara, Turkey, July 17, 2016. - REUTERS/Baz Ratner

Turkey's more than 18 million students began school in mid-September this year as usual. Unlike normal times, however, they began their education year not with an introduction to mathematics or science, but rather by learning about the treachery the nation faced July 15 with the failed coup attempt.

Teachers gave an account of how Turkish democracy was attacked by the traitors within, while praising the “martyrs” who defeated them. In some schools, a "Martyrs Corner" was set up with the photos and stories of the 241 victims Turkey lost on the night of the attempted coup. Other schools arranged theatrical presentations where young students wore army uniforms to salute the brave soldiers who resisted the coup. Students also took oaths, vowing to “never forget this blessed saga that found life with the sacrifice of the martyrs.”

A seven-minute film prepared by the Ministry of Education was an important part of the campaign. The film, which you can see online, first reminds students of the great historical battles the nation has won, such as the Gallipoli campaign of 1915 and the War of Liberation fought between 1919-22. Then it moves on to the night of July 15, with impressive scenes of citizens resisting the tanks and flags flying in the shade of mosques. In the background, you hear President Recep Tayyip Erdogan reciting the lines of the national anthem, especially the parts about the independence of the Turks and their glory against enemies.

What makes the July 15 narrative even more significant is that it is likely to become an integral part of the Turkish education system. The Ministry of Education announced that after this year the coup attempt would find its place in textbooks. Meanwhile, the ministry already distributed two booklets on this particular issue to all students. One is titled “The Victory of Democracy and Our Martyrs.” It begins with a foreword by Erdogan, tells the story of the coup and even gives a “glossary” that defines the exact nature of the traitors — the Gulenists. The other one is titled “July 15: The Attempt to Occupy Turkey,” and tells the story of coups and rebellions against legitimate authority since the Ottoman Empire. It is written by a historian who also happens to write a column in the pro-government daily Sabah, and on its cover presents the Gulenists as an invasion army carried out by a Trojan horse.

What is it that needs to be said about all of this? No one can blame Turkish society for being emotional about what happened July 15. Innocent Turks were killed by the planes, tanks and rifles of their own army. The civilians and policemen who gave their lives to resist the coup are indeed heroes whom Turkey must honor. Every nation commemorates its sacrifices, so Turks have every right to do the same. The reaction to the Gulenists, as the apparent masterminds of the coup, is also understandable.

On the other hand, the particular political narrative that is built around the coup raises concerns, especially if it turns out be a perpetual worldview indoctrinated by the education system. The narrative depicts a black-and-white universe, where patriots defend the nation against enemies inside and out. It also depicts a commander in chief who guides the whole nation against these numerous threats. There is no trace of any self-criticism or soul-searching, such as asking how the nation had come to the brink of a military coup in the first place, what the root causes of these never-ending power struggles of Turkey are, or whether the state and its masters also have a responsibility in contributing to the very threats they are fighting against.

One might wonder whether this is all new to Turkey. Erdogan, after all, constantly heralds a “New Turkey.” In fact, however, the “Old Turkey” that Erdogan’s supporters often condemn had a very similar founding myth. Accordingly, Turkey was founded only after defeating the foreign enemies and local “traitors” in World War I and the following War of Liberation. Mustafa Kemal Ataturk, the commander in chief, had led the nation to glory, which would never have been possible with his absence. This mythology was kept alive by textbooks, student oaths, public monuments, marches, parades and the media. It was not totally wrong, for Turkey indeed had suffered major threats and Ataturk was indeed the war hero. But it also was manipulative, for it helped to mobilize the nation around a single “official ideology” and anchor Ataturk as the undisputable national leader. As a result, “the enemies of Ataturk” became the enemies of the nation, and political opposition became tantamount to treason.

It would be wrong to say that the “New Turkey” has reached that level, but a similar concept of official nationalism is in the air. In this new founding myth, Erdogan replaces Ataturk, and the July 15 failed coup replaces the War of Liberation. One major difference is that Islamic symbols are much more prominent this time, reflecting the values of Erdogan and the majority that supports him. While the “Old Turkey” always suffered from being a regime based on the secular minority, the "New Turkey" relies on the conservative majority.

A more healthy nationalism would still honor the nation’s losses and condemn the attacks against it. But then it would focus on building an inclusive political system and culture in which even the “traitors” can be rehabilitated and the outside world is seen not as a den of enemies but a family of partners. Erdogan and his party, in fact, used to promote such a tolerant and self-confident nationalism in their earlier years. But power does change people. It also teaches, apparently, that it is better to adopt pre-existing patterns rather than try to change them.