As Turkey marks the fifth anniversary of the July 15, 2016, failed coup attempt, the putsch has served as a founding myth for Erdogan’s "New Turkey." 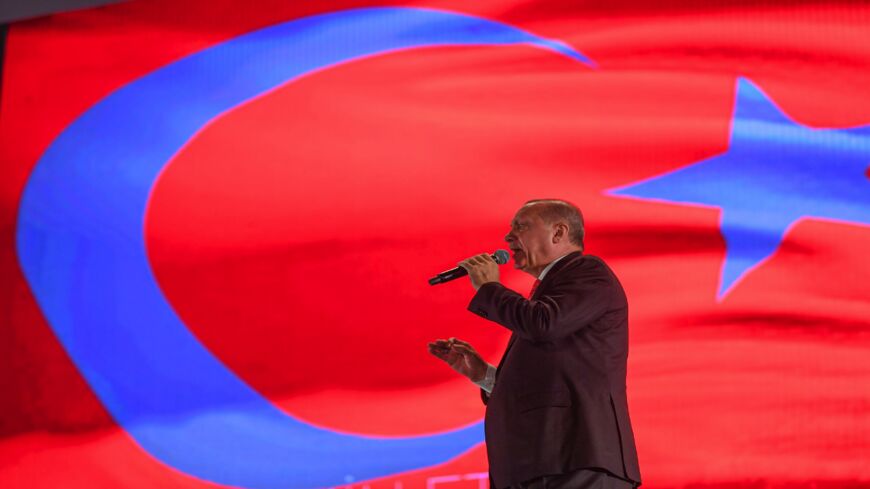 Turkish President Recep Tayyip Erdogan speaks during a rally at the Ataturk International Airport in Istanbul on July 15, 2019, to commemorate the third anniversary of a failed coup attempt that was followed by a series of purges in the public sector and changes to boost the Turkish president's powers. - OZAN KOSE/AFP via Getty Images

Some dates serve as milestones. For Turkey’s President Recep Tayyip Erdogan, July 15 is one of them. The failed coup attempt to remove Erdogan on July 15, 2016, has become the founding myth of "New Turkey" in his historiography.

For five years, the anniversary of July 15 has become a celebration of Erdogan's victory that helped him to replace the country's parliamentary democracy with his one-man rule under his executive presidency. The date also marks the commemoration of the 251 "martyrs" who lost their lives in suppressing the coup attempt.

Commemorative ceremonies were all around the country, especially in Istanbul where the most significant number of casualties occurred, particularly during the clashes on the Bosporus Bridge linking the Asian continent to Europe.

The year 2021 is no exception to the efforts of Erdogan and his regime in the endeavor to celebrate and simultaneously commemorate July 15. A super-production movie titled “Safak Vakti” (“At the Dawn”) on the heroic popular resistance against the coup attempt, which emerged at Erdogan’s call against the plotters, landed in theaters on July 15, 2021. In his daylong speeches marking the commemoration, Erdogan resorted to an epic narrative.

"We remember with grace and gratitude all our heroes who taught a lesson to the traitors who attempted to take our country captive on July 15 by risking their lives to defend their homeland. The flag cannot be lowered!” he said. “Courage is invincible, a nation that marches on the barrels of traitors and unites bravely at the intersection of two continents on July 15 is inseparable, and their persistence is invincible.”

The passion for underscoring the coup attempt has not faded after five years. It is not because the trauma of the coup attempt is still vivid in the minds of the people. Rather, it is because Erdogan’s regime still feels short of legitimizing their rewriting of Turkey's history.

I penned an article for Al-Monitor, published on July 17, 2016 — while the coup was underway — in which I wrote that the attempted coup on the night of July 15 raised more questions than answers. Ironically, after five years, this is still the case. The questions raised remained unanswered, and the mystery around the coup attempt has not been solved.

Today, we know that more than 8,500 military personnel, 35 military planes, 37 choppers, 246 tanks and armored carriers, and three vessels of the navy took part in the coup attempt, with some 4,000 light arms. That means almost 621,000 military personnel of the Turkish armed forces and 1,056 aircraft, 434 helicopters, 102 vessels of the navy and around 1,800 tanks remained immobile. Those figures indicate that the coup attempt was doomed to fail from its start.

Nonetheless, on the night of the coup, Erdogan declared the coup a blessing and then utilized the whole saga to fulfill his ambition for founding the "New Turkey" under his authoritarian rule.

The government did not waste one second before it claimed that its erstwhile ally, cleric Fethullah Gulen who resides in the United States, was the culprit of the coup attempt. Any institution and individuals affiliated with him at any level are considered terrorists and members of the so-called Fethullah Gulen Terror Organization (FETO).

In Turkey’s official parlance, the connection between Gulen and the coup attempt is a foregone conclusion. Anybody that might question the validity of the allegation would be in trouble. The countries that hesitate to buy official Turkish claims have been condemned as enablers of Gulen’s treacherous plot against Turkey. The United States and the European Union — the Western world in general — are also implicated in this narrative, as the Islamist and nationalist constituency of the current regime believe Western powers also supported the coup attempt.

The heavy crackdown in the aftermath of the coup wasn’t limited to Gulenists. The crackdown targeted the entire opposition; the leaders, members, and followers of the pro-Kurdish Peoples’ Democratic Party; and journalists.

According to official data released July 14, some 4,890 people were condemned to imprisonment — 3,000 of them for life. Forty-four thousand military personnel were expelled from the armed forces. The Turkish Human Rights Association and the Human Rights Foundation announced that nearly 140,000 public servants were arbitrarily dismissed. Their right to object was denied during the state of emergency that was in force from 2016-2018, and most of them were denied public and private sector jobs.

The aftermath of the coup attempt also saw a referendum on constitutional change, which brought transformation to an executive presidency that ditches any sort of check and balance mechanism. The Judiciary lost its independent status and became subservient to the president as a result of the constitutional change. The prime ministry post was annulled, and the whole executive authority was transferred to the president.

The Turkish presidential system has no resemblance to the American or French models. It has more common features with the caudillo type of presidencies that prevailed in South American countries during the Cold War.

During a private conversation with a group of journalists that I attended before 2014 when Erdogan became the country’s first elected president, Erdogan explained what kind of executive presidency he envisaged. “The American system is unacceptable for us,” he said. “Imagine if an opposition party controls the legislative organ. They won’t let the president do anything as the executive authority."

July 15 can be interpreted as a landmark for regime change in Turkey. In terms of an emerging New Turkey, it indeed deserves to be perceived as such. It has undoubtedly been a milestone development in terminating the rule of law. Turkey was a candidate for accession to full membership to the EU. In 2015, the country was listed as 80th among 102 countries listed in the Rule of Law Index of World Justice Project. In 2020, among 128 countries, it went further back to 102nd place.

In 2020, applications to the International Court of Human Rights reached 11,750. The court decided on penalties against Turkey in 85 cases out of 97 due to violations of the Human Rights Convention.

The country, albeit gradually, but decisively, moved from a fledgling democracy to an autocracy. Certain political scientists call it competitive authoritarianism, as some opposition parties still function and are not banned.

The birth of an Erdoganist New Turkey and July 15 has undisputedly been a foundational myth. However, for Erdogan, the consolidation of his power is far from certain. In the 2019 local elections, Erdogan lost his main constituency: the megalopolis Istanbul; the capital, Ankara; and all the major provinces that generate two-thirds of Turkey's gross domestic product. His ever-dwindling popular support due to the miserable conditions of the economy — mostly of his own making — has been adding to his already existing woes. For him, the upcoming presidential and parliamentary elections scheduled for the republic's centenary in 2023 are worrisome.

“If you look at President Erdogan's polling ratings together with a difficult economic backdrop, it's quite hard to really imagine the conditions over the next 12 months, for them to think an election looks favorable," Douglas Winslow, Fitch Ratings' director of European sovereigns, told Reuters.

“The World Bank estimates more than 1.5 million Turks fell below the poverty line last year. And a Gini index of income and wealth distribution shows inequality has risen since 2011 and accelerated since 2013, wiping out big gains made in 2006-2010 during Erdogan's first decade in charge,” the Reuters report said.

Whatever lies in the future for Erdogan, it is fair to say he achieved the New Turkey that he envisaged.

His problem is that he could not consolidate his power over his New Turkey. If he loses — and that's still a big if, and it's also unlikely that he would step down gracefully — the painful process of dismantling his New Turkey would be unleashed.

If he wins in 2023, then July 15 will indeed be registered as the most crucial milestone in Erdogan’s odyssey to absolute power.