People who rallied against a military coup attempt on July 15 are distraught by the increased commercialization of their gallantry. 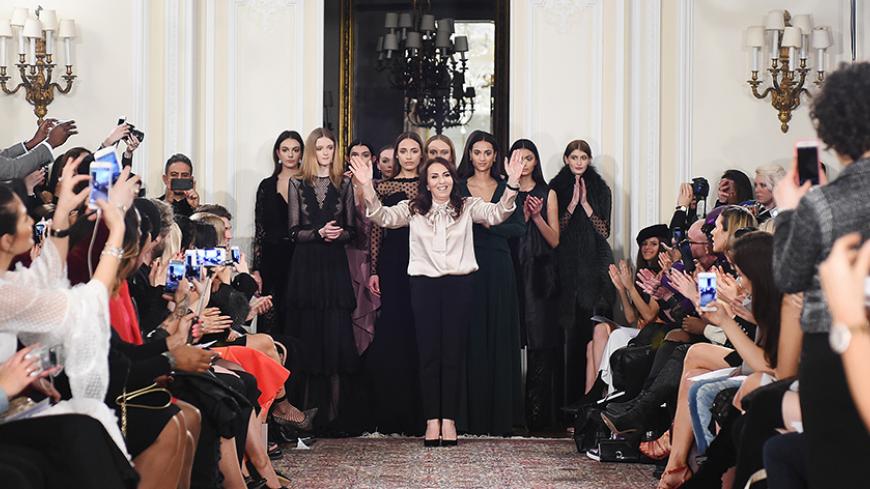 Zeynep Kartal thanks the audience at her show during London Fashion Week February 2017 in London, Feb. 17, 2017. - Tabatha Fireman/Getty Images

Kartal said that she expressed the events of the night of July 15 with fabric; she said influential public figures should not remain silent in the face of the tragedy that took place.

Her fashion show, held at the Turkish Embassy, is the most recent example of how July 15 has become a political asset for the Justice and Development Party (AKP), which has been portraying how the coup was stopped as a cultural resistance movement of its base. Indeed, the examples are numerous and can be found in almost every aspect of life:

First and foremost, every day pro-AKP newspapers and television channels find a way to mention July 15. For example, the daily Turkiye has a banner on its webpage that says July 15 on the left, has the Turkish flag on the right with the phrase “One nation is writing a legend” in between. When you click on this banner, it takes you to other links about that evening. In each one, a different victim’s story is detailed. The daily Yeni Safak has taken it a step further by setting up a July 15 digital library. The website displays dozens of categories from a detailed timeline of the events, including the Gulen movement, interviews, arrests and the rallies held until mid-August to celebrate national unity.

No one can make it through a day in Turkey without being reminded of the July 15 events. A special commemorative coin has been minted for those killed preventing the coup and for veterans. In Turkey, a veteran, or ghazi, is someone who is wounded in the line of duty. The name of the Bosporus Bridge was changed to the July 15 Martyrs’ Bridge. Several other streets, buildings on college campuses and squares have been renamed with the names of those who died stopping the coup. Companies and prominent sports teams have been competing to produce the best July 15 memorabilia to show their loyalty. T-shirts have been particularly popular. Some municipalities have established backdrops where residents can get their photos taken with a “July 15 remembrance” background.

Competition to show solidarity with the government is intense. AKP lawmaker Yalcin Akdogan has penned a book titled “Leader, Political Leadership and Erdogan,” explaining how Erdogan certified his leadership the night of July 15. One can also find multiple patriotic songs on YouTube dedicated to those killed stopping the July 15 coup, with images of brave people and Erdogan. There have been documentaries (one three hours long) and multiple detailed interviews with Erdogan reliving the events of July 15.

The Istanbul City municipality is also preparing to open a July 15 Martyrs and Democracy Museum in Istanbul this year. It will feature artifacts, photos and eyewitness accounts of the attempted coup.

All those wounded fighting off the coup are being rewarded by the government, as are the families of those killed battling the putsch. Their families also are receiving other compensation. The AKP's webpage provides details about what they will be getting. First it states that anyone — even a civilian who might have only lost a drop of blood from their finger — who was wounded fighting the coup is classified as a veteran. The families of those killed fending off the coup will have two of their family members accepted into government employment, while veterans are entitled to having one family member get a government job. Families of those killed fighting the coup and veterans will receive a sizable one-time compensation payment, then regular monthly salaries from the government. If they had any debt to the government, that will be forgiven as well. The relatives will be allowed to receive credit with zero interest to purchase a home, and they will be entitled to receive scholarships. Also, the family members of civilians killed fighting the coup will have an opportunity to study at any college under special student status. The victims’ families receive special discounts on all government-run transportation systems as well. These are rather generous rewards by Turkish standards, considering that for regular soldiers or police officers to be considered veterans, they are required to be at least 40% disabled. The one-time compensation received by civilians is also five times higher than that for regular veterans and for police and soldiers killed in the line of duty.

There are others who have made a name for themselves as a result of July 15. One prominent figure is CNN Turk reporter Hande Firat. Firat was thrust onto center stage when she had Erdogan linked to viewers via a live Facetime connection, which was seen as the turning point for the coup. Firat has been praised for her courage since. Her cellphone connection has been a major image for July 15, and she has written a book about that night. You can see her even in a cartoon prepared for Umraniye district of Istanbul to educate toddlers.

Younger audiences have been the main target of the July 15 propaganda. The Education Ministry announced that beginning with the 2017-18 school year, students in sixth grade and higher will be taught July 15 resistance in the newly designed school curriculum. And July 15 has been declared National Unity and Democracy Day. Almost all schools proudly display July 15 information boards to educate students. Images of preschoolers in school plays enacting the heroic moments of July 15 can be seen in several cities. In one such play, students ages 5 and 6 laid down in front of a tank, then performed prayers declaring the republic was established on July 15.

This has been the mindset the AKP has been attempting to instill in the minds of the public. July 15 is a turning point, and now we start fresh. This is a new chapter. This is the battle where Turks took to the streets against the military and defended their president. On the night of July 15, Erdogan himself said, “This attempt is indeed a blessing of God upon us.” Some see this mysterious sentence as one of gratitude that the Gulen movement was militarily disabled, while others took it as the rebirth of the nation. Yet now columnists are writing pieces with titles such as “Erdogan needs another God-sent blessing.”

While Turkey is preparing for an intense period of campaigning for the April referendum on the executive presidency that Erdogan wants, he and his team have gone overboard in commemorating July 15. That night Erdogan shined as a hero who unified people from all different walks of life under one banner opposing the military coup. Yet this anti-coup coalition, portrayed as national unity, cannot be maintained for the referendum.

Hence, Erdogan has allied with some ultra-nationalists who were a loud voice against the military coup attempt. However, as Gray Wolves split among themselves, the majority of the ultra-nationalist base has joined the naysayers. Given that both the main pro-Kurdish party, the Peoples' Democratic Party, and the Republican People’s Party both oppose the proposed amendments, Erdogan understands he might have to rearrange his domestic alliances. In the coming days, pious Kurds and their resistance to the military coup could be in the headlines as they have spoken in support of Erdogan’s referendum.

Erdogan’s public relations team has successfully tied the landmark events of Turkish history, from the independence war to the Feb. 28 coup against pious Muslims in 1997, to the July 15 coup attempt. However, it seems that despite all the investments on keeping that patriotic mood alive, this won't be enough to convince people to vote "yes" for an all-powerful presidency. Erdogan has his work cut out for him.