While the Iraqi government cautiously follows up on the impacts of the US executive order to ban Iraqis from the United States, some Shiite militias threaten to target Americans in Iraq in response to the new US policy. 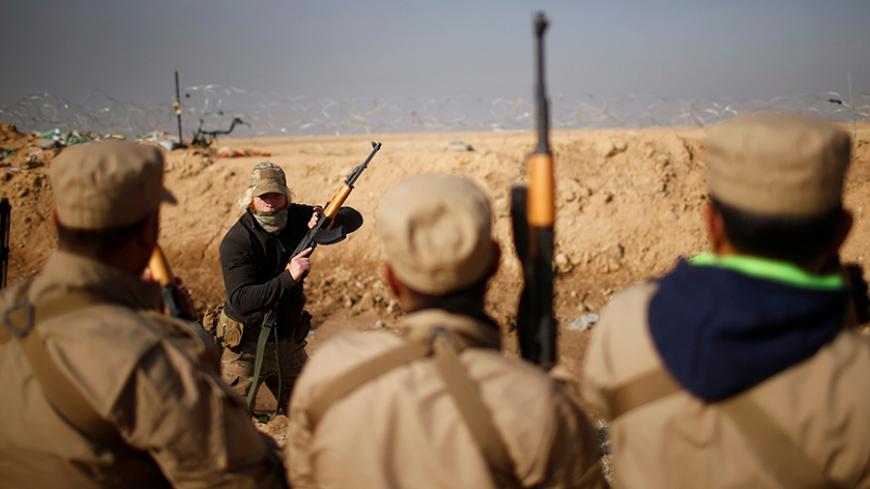 A member of the US Army special forces provides training to fighters of the Iraqi Popular Mobilization Units at Makhmur camp, Iraq, Dec. 11, 2016. - REUTERS/Mohammed Salem

BAGHDAD — US President Donald Trump's Jan. 27 executive order to ban nationals of Iraq and six other Muslim-majority countries from entering the United States for 90 days has caused a great uproar among Iraqis. Although the travel ban has been temporarily halted by the US judiciary, the repercussions of the event are still ongoing in Iraq. Iraqis see the travel ban as an insult and a betrayal of the people standing against and fighting to defeat the Islamic State.​

On Jan. 30, the Iraqi parliament voted to recommend that reciprocal measures be taken against the travel ban. The day before, Iraqi Shiite cleric and Sadrist movement leader Muqtada al-Sadr had called on Trump to tell American nationals to leave Iraq.

The Iraqi parliament also recommended calling upon the United Nations, international organizations, the Arab League and the Organization of Islamic Cooperation to take stands on the issue, calling upon the US Congress to review the executive order and demanding that the US administration restudy its decision.

Ibtisam al-Hilali, a member of the Reform Front, told Al-Monitor that the government and executive authorities need to carry out the parliament’s reciprocal measures if the US ban resumes.

Asked whether Iraq could influence the US decision, Hilali said, “Adopting diplomatic approaches is the best means to force the American side to renounce this rushed decision; otherwise the government and the relevant authorities should implement the parliament’s action to maintain Iraq's dignity.”

On Jan. 30, the US Department of Defense said it is cooperating with the White House and other institutions to put together a list of all Iraqi nationals who worked with the United States since its invasion of Iraq in 2003 to exclude them from the travel ban. These efforts, however, have not helped ease the issue in Iraq.

On Jan. 31, Prime Minister Haider al-Abadi announced that his government is discussing a set of options “in response” and expressed his hopes of getting Trump's order changed; Abadi described it as an insult to Iraq and Iraqis. However, he said he has no intention of taking reciprocal measures.

On the other hand, armed factions in the Popular Mobilization Units (PMU) took a tougher stance. A senior leader of the Iraqi Hezbollah Brigades lamented the strong-arm policies adopted by Trump in dealing with certain Muslim-majority countries. The faction's leader even threatened to use force and start engaging in armed action against US troops in Iraq.

“We are observing and waiting for a unified political stance from the parliament and the Iraqi government toward Trump’s exclusionary policies. Then we will have an earth-shaking response in that regard,” the leader, who calls himself Abu Talib al-Saeedi, told Al-Monitor in a phone conversation. He added, “We don’t consider all American citizens the same, as our dispute is restricted to the US invasion and those who carry weapons around the country. Therefore, members of the Hezbollah Brigades observe and follow the movements of these troops on a large scale. This is why we have a presence near their military facilities. When something happens, we will resort to the weapons we used against them before.”

Saeedi said the brigades are “on alert” and said, “If American nationals remain here in the same quantities, we will have to resort to armed action once again to remove the troops as we did before in 2011.”

Such statements are similar to what Aws al-Khafaji, the head of the Abu al-Fadl al-Abbas Brigade, affiliated with the PMU, told Al-Monitor. “Resistance factions were — and are today — observing the presence of all foreign forces on Iraqi soil,” he said.

He continued, “Factions of the resistance have always reassured their stance that aims at targeting American military personnel who came to Iraq as occupiers. However, at the same time, we insist that civilians, regardless of being American, are not the target of the Islamist resistance in Iraq.”

For her part, Hamdia al-Husseini, a parliament member representing the Citizens Coalition, called for moving Iraqi funds from the United States, boycotting American goods and finding alternatives to them. “Such measures are considered means of reciprocity that come in response to Trump’s policies against Iraqis, to restore the dignity of Iraqis who have sacrificed their souls and blood for the sake of their country,” Husseini said in a press statement issued by her office.

Abadi's information office spokesman, Saad al-Hadithi, told Al-Monitor that he hoped Trump's measures banning Iraqis from entering the United States would not affect the relations between the two countries. He called for addressing differences smoothly. “The strategic US-Iraq Status of Forces Agreement should be taken into consideration and respected so as not to harm any of the two signing parties,” Hadithi said.

Moreover, Foreign Ministry spokesman Ahmad Jamal said the ministry was surprised that the executive order did not include countries that were — and are today — exporting terrorism and supporting extremist ideas, referring to Saudi Arabia. “What is even more surprising is how no Iraqi was proven to have planned or executed any terrorist action in any of the countries of the world. The Iraqi community is peaceful, represents no security threat whatsoever and its contributions effectively support the US economy,” Jamal said.

The Iraqi government has many obstacles to overcome concerning the negative impact of the US travel ban. It also has its obligations and carries a heavy burden to control armed factions to prevent the targeting of American nationals and military bases where American advisers reside.