Iraq's Popular Mobilization Units warn against 'renewed occupation' by US

Iraqi factions, namely the Popular Mobilization Units, reject the presence of US troops on Iraqi soil, as some claim that their presence benefits the Islamic State. 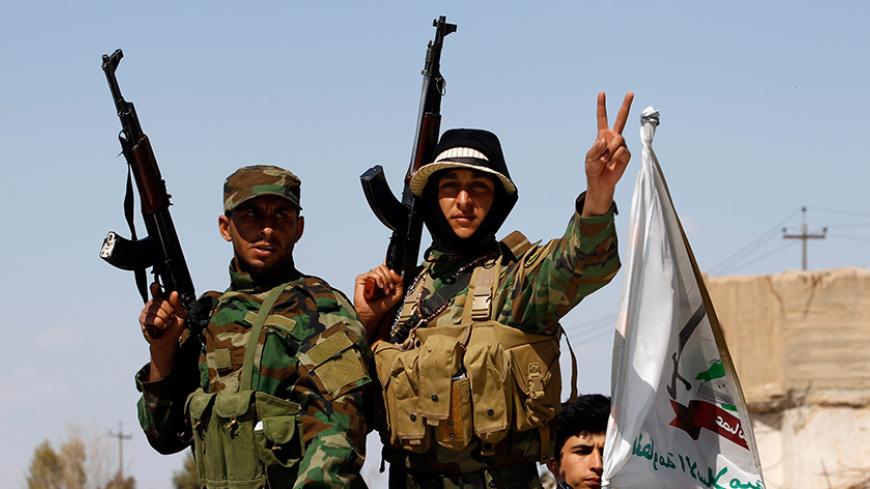 Fighters known collectively as the Popular Mobilization Units, which are allied with Iraqi forces against the Islamic State, gesture with their weapons in Salahuddin province, Iraq, March 17, 2015. - REUTERS/Thaier Al-Sudani

BAGHDAD — In western Iraq, at Ayn al-Asad air base, US troops are advising and training Iraqi forces. Adjoining the base, units from the Hezbollah Brigades make camp as part of the Popular Mobilization Units. The units, alongside government forces, are fighting the Islamic State (IS), which controls 17% of the country,

In that general context, unconfirmed reports have been circulating in the Iraqi media about rising friction between the Popular Mobilization Units and US troops. Yet, despite these reports remaining in the realm of media hearsay, insiders admit that friction between the two parties seems likely, due to their proximity and the probable convergence of unforeseen future political and military developments that may lead to confrontations between the two.

Such expectations are based on previous stances. On Dec. 1, the Hezbollah Brigades threatened to pursue and target US forces in Iraq, as "they refuse the help of US forces in the war against IS.”

On Sept. 22, some factions of the Popular Mobilization Units, namely the Hezbollah Brigades, the Badr Organization and the League of the Righteous, issued a joint press release warning that a return of US troops to Iraq would be viewed “as renewed occupation of Iraq by the United States.” They further called on the Iraqi government “not to seek help from US forces.”

Hezbollah Brigades spokesman Jaafar al-Husseini told Al-Monitor, “US soldiers are not welcome in Iraq, either as consultants or as members of the international coalition, because to us such troops are hostile and must be opposed.”

Husseini denied any coordination between the Hezbollah Brigades and the international coalition and the Iraqi government.

The threat of targeting US troops in Iraq was not limited to Hezbollah; the head of the Badr Organization and second-in-command of the Popular Mobilization Units, Hadi al-Amri, issued a press statement Sept. 30 that read, “I informed [Prime Minister] Haider al-Abadi that the United States should only back Iraq with weaponry and refrain from participating in combat operations, because we reject their presence on the ground.”

For his part, Saad al-Hadithi, the spokesman for Abadi, told Al-Monitor, “The stance of the Iraqi government vis-a-vis US troops and the international coalition lies in the framework of communication and coordination in the war against terrorism. This falls within the overall context of Abadi being the commander in chief of the armed forces, and within the purview of his constitutional powers to draw the defensive policies of the country.”

Hadithi added, “It is only natural for the government to deal with the United States, as Baghdad and Washington are signatory to a 2008 security agreement with US aid determined by said agreement. The Iraqi government manages its relationship with the United States in the latter’s capacity as leader of the international coalition against IS and within the context of safeguarding the interests of the country. We condone any support that helps us do away with terrorism as quickly as possible.”

Concerning the possibility of clashes between the Popular Mobilization Units and US troops, Hadithi said, “International coalition airplanes are taking part in aerial operations against IS, in parallel with the extensive and continued presence of the units on the ground. As such, coordination exists in view of the fact that the Popular Mobilization Units are part of the Iraqi government’s combat capabilities.”

In that regard, Abadi issued a press statement Nov. 30 indicating that Iraq did not require US troops on the ground “because Iraq fielded enough troops to vanquish terrorism.” Abadi’s statement came after US Sens. John McCain and Lindsey Graham called earlier that day for increasing US troops in Iraq to 10,000 US soldiers.

Qassem al-Araji, a member of the Iraqi parliament's Security and Defense Committee, told Al-Monitor, “Iraqis are ill-served by the presence of US troops in Iraq, as such troops facilitate the escape of terrorist organizations from the grasp of the Iraqi army and the Popular Mobilization Units. We shall never allow such a presence because we are capable of protecting our country from terrorism. There are attempts by Americans on the ground to protect high-ranking IS leaders, which proves that this organization is but a tool wielded by the Americans, who do not want it eradicated in Iraq.”

Moreover, in a press statement issued Dec. 10, the US Embassy in Iraq denied “recent news reports alleging the arrival of 200 US combat troops to Ayn al-Asad air base.”

Security expert Hisham al-Hashimi told Al-Monitor, “Islamic resistance factions are bound by an ideological stance against the presence of US troops that may control the ground or impose their terms. The threats made by factions affiliated with the Popular Mobilization Units are meant to create political and media hype to deter the Americans. As such, they become part of Iran’s strategic depth as they fall in line with the Iranian position,; keeping in mind that it is highly unlikely for Iran to militarily clash with the Americans at this time, either directly or through its Iraqi proxies. Iran has only recently restored its relations with the United States, and there are political and commercial relations [between the two countries] in the offing, which is why Iran does not want to clash with the US.”

Thus, Abadi finds himself in an awkward position as the Popular Mobilization Units — which are now part of Iraq’s security establishment and should therefore be under his control — are acting against his wishes. This is especially true given the units' threat to strike the US forces, which have been deployed with the knowledge and consent of the Iraqi government.

As Abadi himself requested the help of the US military advisers, he is now compelled to find common ground between the pro-Iran Popular Mobilization Units and the United States.

by Murielle KASPRZAK and Joseph SCHMID | AFP | May 26, 2022
END_OF_DOCUMENT_TOKEN_TO_BE_REPLACED