Will Sadrists target US troops in Iraq?

As the United States announced it would send an extra 560 troops to Iraq to participate in the battle to liberate Mosul from Islamic State control, Iraqi Shiite cleric Muqtada al-Sadr's militias threatened to target them. 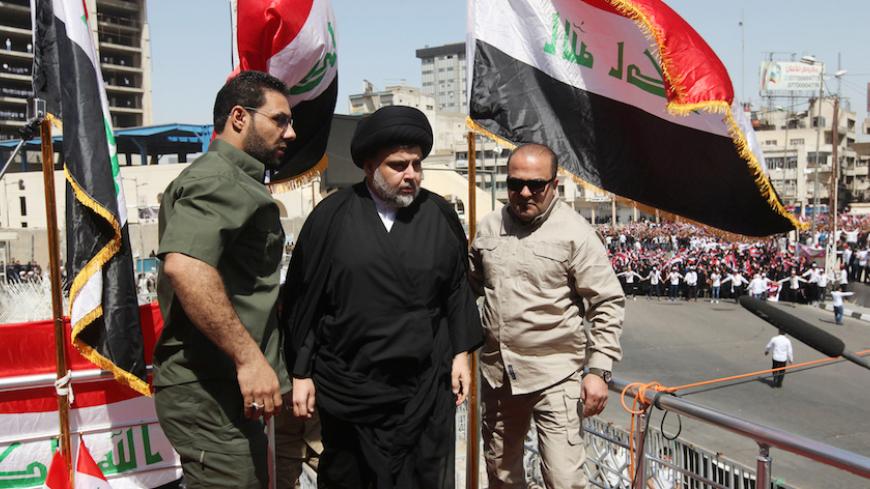 BAGHDAD — Alaa Abboud, the spokesman for the Peace Brigades, the armed faction of the Sadrist movement, said in a TV interview with a local Iraqi channel July 20, “We will target the US forces anywhere they are in Iraq. We are not only keen on targeting them, but thirsty for their blood.”

This followed threats by the head of the Sadrist movement, Muqtada al-Sadr, July 17 to target US military troops that are allegedly to be sent to Iraq soon to take part in the battle to liberate Mosul. Sadr, who fought a fierce battle against US forces in 2003 in the city of Najaf in southern Iraq, continues to believe that US military personnel should be targeted by his armed groups.

The Shiite cleric's threats came following the visit of US Secretary of Defense Ashton Carter to Iraq on July 11. Carter said, “We are pleased to tell you today that [the Pentagon] has agreed to send 560 more troops to Iraq to provide critical support to Iraqi forces, in terms of infrastructure and logistic capabilities in the Qayyarah military airport.”

Before Carter’s announcement on sending more US troops to Iraq, Sadr had hinted in a TV interview July 6 about his intention to target the US Embassy in Iraq by saying, “The [US] embassy has harassed us before and now it is our time to harass it.”

Today, Sadr has a force within the Popular Mobilization Units (PMU) known by the name of the Peace Brigades, which he said were ready to target US forces anywhere in the country. This places the Iraqi government in an awkward position with its US ally, which has been supporting the war against terrorism and signed the Strategic Framework Agreement with Iraq.

What is strange is that Sadr has a political bloc in the Iraqi government and parliament. Iraq has positive bilateral relations with the United States and is working under the Strategic Framework Agreement signed between the two countries in 2011 and voted on by the Iraqi parliament. As per the agreement, the United States is committed to provide support and assistance to Iraq on all levels.

Saad al-Hadithi, the spokesman for Iraqi Prime Minister Haider al-Abadi, told Al-Monitor, “The position of the Iraqi government and its prime minister, Abadi, is very clear, which is to cooperate with the United States and accept the provided support in their fight against terrorism. Those who make other statements speak for themselves only.”

“American advisers have been in Iraq since August 2014 and they are helping Iraq in its war against terrorism. They have not been targeted by any party. The presence of these advisers or any US military personnel comes as part of the Strategic Framework Agreement,” he said.

In fact, a number of US advisers have been stationed in Ain al-Asad air base in Anbar province and have not been attacked. It appears that Sadr’s statements are part of the attempts to pressure the Iraqi government and embarrass it in front of the United States, especially since the dispute between Sadr and Abadi is growing increasingly.

It is not likely that Sadr would order his forces to target US soldiers participating in the battle against the Islamic State, given the military hardships on the ground and especially since Sadr’s followers are likely following orders by the Iraqi official troops.

In the most recent protest July 15 in Baghdad's Tahrir Square, Sadr and his followers shouted, “America leave,” calling for the closure of the US Embassy in Baghdad and the expulsion of all those who work under the US government umbrella. In a statement July 13, Sadr went as far as to accuse Iraqis who worked with US institutions and applied for asylum or immigration in the United States of having no honor.

Sadr’s threats against the US Embassy in Baghdad are nothing new. He said March 8, “All embassies in the Green Zone [the heavily fortified area that includes Iraqi government buildings and diplomatic missions] in Baghdad will be safe from any attack, should Iraqi [protesters] wish to enter it, except for the US and British embassies.”

Sadr, however, is not the only one to threaten the US forces in Iraq. The PMU, which is closely linked to Iran, considers the US troops to be an occupying force and has threatened to target them. Threats and statements have yet to be translated into actual acts on the ground, despite the US advisers’ presence in western Iraq for two years now.

Thus, any party seeking to target US military forces could find itself at loggerheads with the Iraqi government, which does not view the US troops as an occupying force in Iraq but as a force working with the Iraqi forces, which gives them legitimacy to be present on Iraqi territory.