Russia has come to realize that some opponents of the Syrian regime are actually moderates rather than terrorists and that a move to empower local governments could help resolve the conflict. 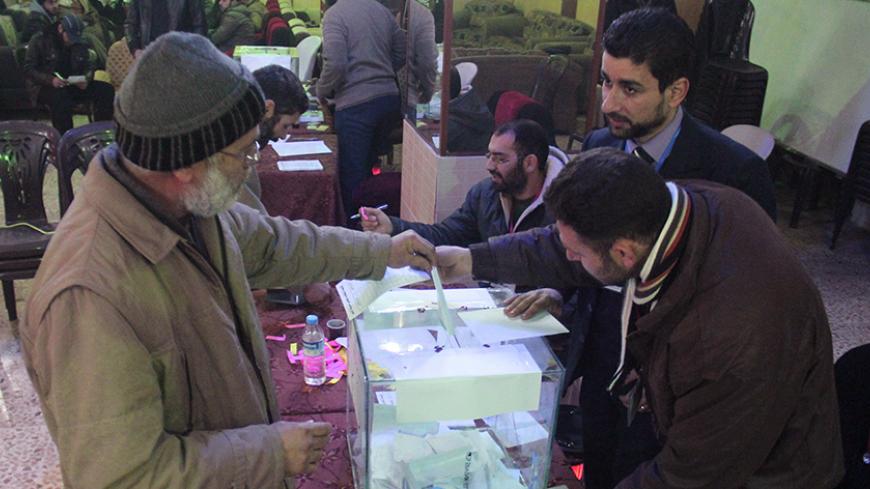 A Syrian man casts his ballot at a polling station in the city of Idlib as voters elect the city's first civilian council, two years after it was overrun by rebels and jihadis, Idlib, Syria, Jan. 17, 2017. - OMAR HAJ KADOUR/AFP/Getty Images

The major political slogan of the Bolshevik Party leading up to the 1917 Great October Socialist Revolution and the uprising itself, “All Power to the Soviets!” is now relevant to Syria.

The long-lasting civil war in Syria killed centralized government stone dead and caused a de facto territorial fragmentation. Although international players are currently voicing “commitment to Syria’s sovereignty, unity and territorial integrity,” it also is a fact that alternative forms of civic self-government, namely local councils, have held sway in rebel-controlled districts for some time now.

According to Al-Monitor’s sources close to the National Coalition for Syrian Revolution and Opposition Forces, the country’s local councils numbered 404 after the fall of eastern Aleppo to the forces of President Bashar al-Assad. Self-government is in the offing in Turkey’s buffer zone in northern Aleppo. Thus, one can argue that the self-organizing revolutionary movement suggested by Syrian activist Omar Aziz at the onset of the uprising in 2011 has materialized.

Until recently, the Kremlin refused to acknowledge the civil war in Syria, portraying the conflict only as Damascus’ fight against “terrorists.” Such a policy prevented Russian officials from objectively assessing local councils’ performance. Moreover, the issue is a real blind spot among many Russian politicians and pundits.

Indeed, on Nov. 8, Russian Foreign Ministry spokeswoman Maria Zakharova labeled councils in eastern Aleppo “self-proclaimed authorities” doing “what their external sponsors or backers told them” and playing into the hands of “the most radical illegal armed groups.” Russian Defense Ministry spokesman Maj. Gen. Igor Konashenkov said Dec. 13 that what eastern Aleppo had experienced was “indiscriminate terror,” rather than an opposition movement and local councils. Though Russia described self-government in formerly rebel-held areas of eastern Aleppo with broad strokes, one should note that despite “random terror,” Russia’s Defense Ministry was able to evacuate virtually all besieged fighters and their families to Idlib. At the same time, it is clear that notorious jihadis should have been detained and vetted.

However, the recapture of eastern Aleppo and the Defense Ministry's subsequent recognition of Syria’s moderate opposition appear to have reset Moscow’s attitude toward both rebels and “local power brokers.” In the end, Article 15 regarding the separation of power between local councils and central government was incorporated into Syria’s much-talked-about draft constitution produced by Russian experts and presented to the armed opposition at negotiations last month in Astana, Kazakhstan.

On the one hand, such a step signals Moscow’s willingness to make concessions and to consent to Syria’s division into zones of influence within its existing boundaries. On the other hand, the move once again signifies the Kremlin’s inconsistency — characterized by the pretense of stability, the absence of a long-term Syria strategy and the influence of domestic policies on foreign ones.

Moscow’s analysts are united in stating that the draft constitution, including such controversial points as Kurdish autonomy and a seven-year presidential term, is merely an attempt to promote dialogue between all the parties concerned. Yet it is evident that a focus on “legalization” of local councils and their integration into the political conflict settlement represents an appropriate way to do that.

“Wholesale reforms” require much time and effort. The time vacuum and lack of visible achievements play into the hands of hard-line and terrorist groups. In this respect, supporting local government is the most effective and pragmatic way to restore peace for the locals, to address social needs and to create jobs after a lasting truce.

However, problems also arise. On the one hand, the councils are trying to distance themselves from any armed groups. On the other hand, they need the assistance of outer forces. Ma'arrat al-Numan, a city in Idlib province, illustrates successful coordination between the local council, local coordination committees and the Free Syrian Army's Division 13, which is closely affiliated with the local administration. They jointly managed to force Jabhat Fatah al-Sham (formerly Jabhat al-Nusra) to withdraw from the region. Commanders of the armed groups and activists of local councils are quite close and the distinction between them is somewhat symbolic, even though the latter is charged with addressing pressing social issues rather than sustaining control over the areas.

Given this, an important question logically arises: How will Damascus take Moscow’s suggestion to decentralize power? As of now, the reaction is still unclear, as no one has publicly commented on the situation on the ground. However, the pro-government Syrian media tend to be quite skeptical about the performance of local councils. They stress that the councils fail to meet even the basic needs of the population, despite the assistance of nongovernmental organizations and funding provided by the West and the Persian Gulf states.

Meanwhile, the regime has long been playing its own game with local councils. Damascus maintains leverage in opposition-held areas, first and foremost, by demonstrating its sustained, indispensable role in providing essential public services — paying wages to teachers and money to pensioners who have not been reported as involved in opposition. At the same time, the regime has openly opposed any challenge to its monopolized areas such as providing public services and an alternative educational and health-care system. Damascus launched deliberate airstrikes in the cities where local councils had been most successful and thereby had posed a substantial challenge to the regime. That was the case, for example, in Ma'arrat al-Numan, Douma and Darayya. However, in some areas, the administration has sought reconciliation with local councils for its own benefit — as it did, for instance, in Quneitra and Daraa provinces.

At the same time, since the emergence of the first local councils five years ago, the opposition has failed to agree on a model of local administration and self-government, or to vest them with political functions. As a result, with the rare exceptions of the Kabbun and Ma'arrat al-Numan assemblies, councils provide only some public services, and they do not have any administrative duties or executive or administrative powers. The idea of holding elections to provincial councils that represent various administrative layers, interact with the United Nations and other bodies and can directly conduct political reform in the long run has not been fully implemented. As of now, only eight councils of the kind have been formed in Syria.

Local councils can possibly initiate cooperation with the regime and with the Russian officers at the Center for National Reconciliation, based at the Khmeimim military base. Some sources on the ground told Al-Monitor that there are Christians in the groups who cooperate directly with the councils and among activists. After some “indoctrination,” it may prove valuable to have local councils recognized by the regime as civil structures.

Remarkably, Syrian Kurdistan’s positive experience with local councils may well be studied and used across Syria. The Kurdish Democratic Society Movement headed by the nationalist Democratic Union Party is of particular interest to those who want to establish fully autonomous, civil-military self-government structures; consider the Manbij Military Council, for example. To streamline the work of local councils and understand their role in the transition to peace, it is important to make good use of the experience being gained during the civil war.