Is the Palestinian economy trending up?

After two years of sharp decline, the index for industrial production in Palestine rose slightly in 2016. 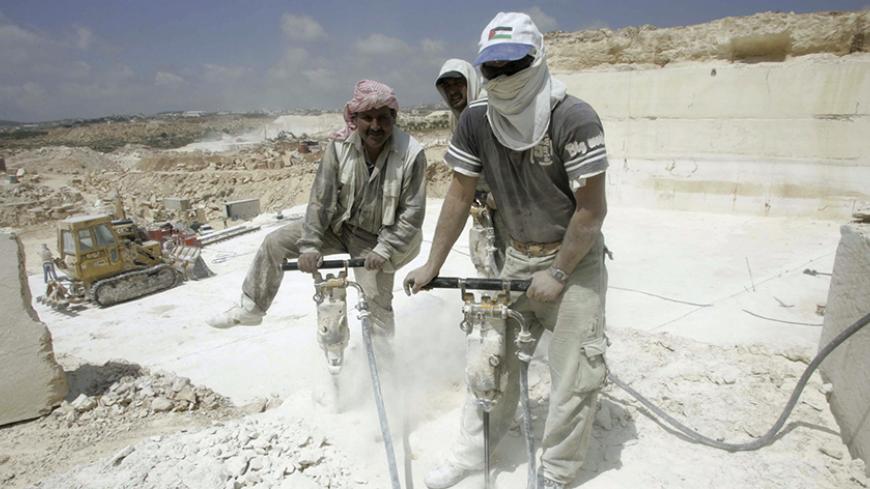 Palestinian laborers use jackhammers at a quarry in the village of Shioukh, West Bank, April 10, 2007. - REUTERS/Nayef Hashlamoun

After two years of sharp decline, the Palestinian industrial production index recorded a small gain in 2016.

The statistics bureau said that the increases occurred in the areas of water supply products and recycling, which was up by 15.8%. Stone quarries were up 13.1%, while electric supplies and air-conditioning products were down 26.3% in 2016 compared with the previous year.

Samir Hazboun, an associate professor of applied economics at Al-Quds University, told Al-Monitor that while last year witnessed an end of the decline, the increase in industrial output is unlikely to be sustained. “Last year’s drop in oil prices means that energy costs were down. But the current prediction that oil will average $58 a barrel means that our energy bill will increase, therefore slashing any potential increase in revenue.” Hazboun said that already in 2017, the electrical bill is up 5%.

Hazboun, who chairs the Bethlehem Chamber of Commerce, said that part of the increase in the revenue of stone quarries has to do with the fact that Israel has finally allowed the importation of laser-guided stone-cutting equipment. “They have eased dual-use imports, thus helping our stone industry, which was losing Gulf business to quarries in Tunisia and Turkey.” Hazboun said some factories that were unable to import high-quality stone-cutting machines had been forced to move to Oman, where they are able to cut stones and export them to some of the nearby Gulf countries.

One of the more successful stone-cutting factories was established in the Bethlehem area by a businessman from the Hebron area. Ma’en Amro was able to import high-quality laser-cutting machines and has been using them to cut marble for both local sales as well as the more lucrative Gulf markets.

Amro set up his factory in the Bethlehem Multidisciplinary Industrial Park, established with Palestinian and French investment. Hazboun, who is advising the new industrial zone, told Al-Monitor that phase one of the project covered 50 dunums (12 acres) of land in Area A, which is fully under the control of the Palestinian government. “The first phase of the project has attracted 19 factories and the second phase has already attracted two new factories even before it is completed,” he said.

Bethlehem's successful industrial zone, which involves multiple countries, is being replicated in other regions of Palestine. In the Jenin area, Germany and Turkey are partnering with local Palestinians to set up a similar industrial zone in the north of the Palestinian areas. In the Jordan Valley, the Japanese have been working on the Valley of Peace project, helping develop a zone for agricultural industrial products.

The overall increase in Palestinian industrial production has left a positive impression on the budget of the Palestinian government. Palestinian Minister of Finance Shukri Bishara reported in September that the number of those paying taxes in Palestine has increased from 150,000 to 200,000. This has proved crucial in helping protect Palestinians from political pressure as outside funding, especially from the United States, is witnessing a sharp decrease.

While there are small signs of an improved industrial economy in the West Bank, the situation in the Gaza Strip continues to bring down the overall Palestinian economy and the gross domestic product (GDP). Small amounts of furniture and textile were allowed to be exported in 2016, according to the Israeli nongovernmental organization Gisha. In November 2016, Gisha reported that only 81 truckloads were exported to Israel, 124 to the West Bank and 45 truckloads were allowed to be exported abroad.

The crippling situation of the Gaza economy due to the decade-old siege has brought down the Palestinian economy overall. Palestinian GDP per capita is still very low compared with neighboring countries, averaging $2,867 in 2015. In Israel, the GDP per capita is $35,728; in Egypt it stands at $3,615, while in Jordan it is $4,940, according to 2015 World Bank figures.