Why Palestinians are unfazed by calls to cut off US aid

Palestinians don't appear to be fazed by the calls of the Trump administration to cut off aid to the Palestinian government, as some feel that this could be a political relief from Washington pressures. 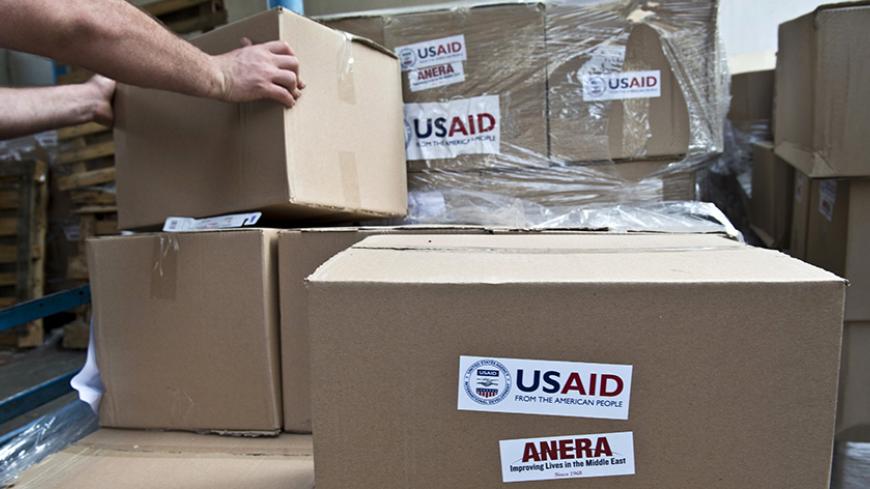 A UN worker takes a box containing sanitation kits and soap provided by the United States Agency for International Development (USAID) being stored at a UN school before a distribution to Palestinian displaced people in Gaza City, Gaza, Aug. 15, 2014. - ROBERTO SCHMIDT/AFP/Getty Images

Prominent Palestinian politicians and economists in the Palestinian territories appear to be totally unfazed by threats that the Republicans in both houses of Congress and in the Donald Trump administration might cut off aid to the Palestinian government.

Mustafa Barghouti, an elected Palestinian legislator, told Al-Monitor that the United States has already reduced aid to the Palestinian government. “In the past two years, we have seen a steady decline in financial support coming from Washington to the Palestinian government. Some of the remaining aid coming from the United States is going directly to local governments, and the rest is distributed to civil society organizations by USAID [US Agency for International Development].”

A US official confirmed Barghouti’s statement, telling the Wall Street Journal Nov. 16 that US funding, which goes straight to the Palestinian government’s creditors, “has dropped from about $100 million in 2014 to roughly $75 million in 2015.”

Barghouti, the secretary-general of the Palestinian National Initiative, has a number of questions about the aims of USAID. “With USAID, a large chunk of the money is spent as overhead on US-based organizations, and it is not clear what their [the organization’s] goals are in Palestine.”

An editorial in the Wall Street Journal published Nov. 13 called on both the Barack Obama and Trump administrations to “stop aid to terrorists.” The conservative newspaper supported legislation in the US Congress that would “stop the flow of US tax dollars to terrorists.”

According to the British daily The Sun, the United Kingdom temporarily suspended in October some of the aid to Palestinians based on claims that “UK aid supposedly paying for civil servants in Gaza was being transferred to the Palestinian Liberation Organisation,” and is making its way to what the paper called “terrorists.”

However, a British official told The Sun in the same article, “We are not stopping the Palestinian Authority [PA] overall, just delaying it to a date when we know our money won’t be going to people who do nothing in return for it.” The reference here is the unproven claim that UK charity aid money makes its way to Palestinian fighters.

But Barghouti insisted that the United Kingdom has not stopped aid to Palestine and that the issue has been resolved with London.

Another Palestinian businessman interviewed by Al-Monitor also appeared not to be rattled by the US threats. Samir Hazboun, the head of the Bethlehem Chamber of Commerce, echoed Barghouti’s statement that in 2016, most US aid to the Palestinian government had stopped. “USAID is still giving a small grant, but they are going mostly to local municipalities,” he said.

In this context, Palestinian Minister of Finance Shukri Bishara said Sept. 1 that the number of taxpayers has increased from 150,000 to 200,000.

Palestinian Prime Minister Rami Hamdallah talked about the fiscal disciplinary issue back in April when he proudly showed Al-Monitor a Feb. 11 IMF statement acknowledging the reduction of the Palestinian deficit to nearly 1% of gross domestic product.

The US move to reduce funding might have had some effects on Palestinian institutions, but these effects were addressed by the continuation of support from other countries. Education is one area that has suffered as a result of the aid cuts. “The European Union, Canada, Japan and others have continued, and in certain cases increased, their support to Palestinians,” Hazboun told Al-Monitor. Canada announced Nov. 16 an increase in its support to Palestinian refugees.

While Hazboun acknowledged that the Palestinian government is no longer in need of US funding, he questioned the wisdom of the move in Washington. “If they are interested in stability and in developing strong economic Palestinian institutions, such a move is not very wise.”

Hazboun argued that with the reduction in financial aid, the United States loses its ability to have any political influence over Palestinians. “They are losing their ability to advise and persuade the Palestinian government in whatever direction they want.”

Ironically, with the reduction in US funding, some press reports indicate that Israel is playing a positive role in supporting the Palestinian government to ensure that it stays afloat. The Wall Street Journal quoted on Nov. 16 a World Bank official saying that Israel has returned tax money due to the Palestinian government in a one-off payment of $262 million and has also agreed to restructure a $500 million debt owed to the Israel Electric Corporation.

As the United States prepares for a transition to a Donald Trump presidency, it is highly important to pay attention to how to structure US foreign policy in the Middle East. While the military war on the Islamic State and its affiliates will certainly continue during the Trump era, there is ample evidence to show that to defeat extremism and radicalism in the Middle East and the world, guns and drones are not effective.

The Palestinian issue might not be front and center in Trump’s daily security briefings, but the new US president will soon realize — what even Israel has acted on — the importance of supporting the stability of the Palestinian government.