The latest economic reports from the Palestinian Central Bureau of Statistics indicate a rise of prices, which may lead to inflation. 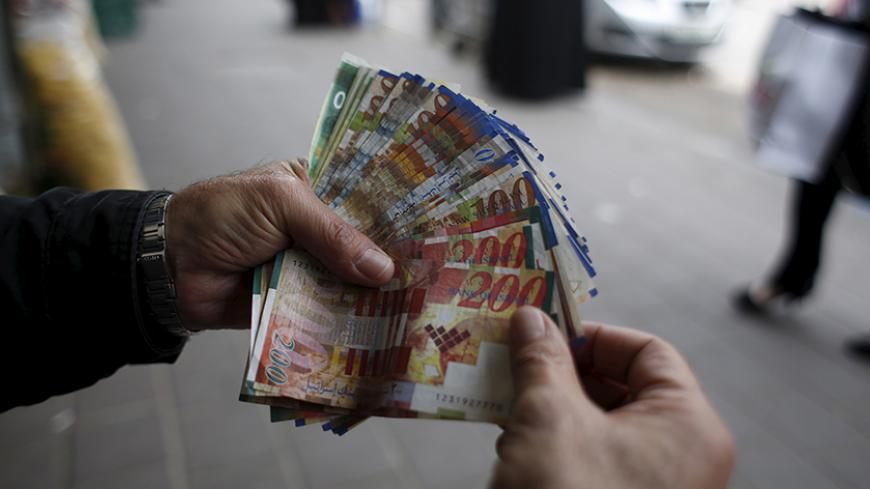 The Palestinian Central Bureau of Statistics (PCBS) indicated in a May 14 press release that during April 2017, the Palestinian consumer price index (CPI) "increased by 0.86% compared with April 2016.”

It should be noted that 2016 witnessed a 2.67% rise in WPI for local products compared to 2015. Also in 2014, the price index rose by 0.84% ​​compared to the previous year. Concerns have grown that the Palestinian economy will see a record rise in commodity prices even as Palestinian wages remain low.

Maher Tabbaa, the director of public relations and media at the Gaza Chamber of Commerce and Industry, told Al-Monitor, “The rise in WPI and CPI in Palestine is dangerous to the Palestinian economy, as these indices have significantly inflated in recent years, which would worsen the financial burden borne by citizens. The inflation index is registering a record rise for the basket of consumer goods, on which citizens spend more than 86.9% of their monthly wages.”

He added, “The prices of semi-finished goods and raw material prices have increased significantly, which threatens the country with an economic disaster that will harm the private sector and probably push it to seek investment alternatives abroad if the situation continues as it is without the government intervening to raise the minimum wage to meet current inflation rates.”

On March 1, Palestinian Minister of Labor Mamoun Abu Shahla set the minimum wage in all Palestinian provinces at 1,450 shekels (about $400). For comparison, in 2011, the poverty line in Palestine was set at 2,293 shekels (about $637) per month for a family of two adults and three children. “Deep poverty” is defined as a monthly income of 1,832 shekels ($509) or less per month, which is still higher than the minimum wage.

The minister's move to provide a minimum wage is an implementation of Decision No. 11 of 2012. The five-year delay is blamed on the blockade on the Gaza Strip.

Sami al-Amasi, the head of the Palestinian General Federation of Trade Unions, told Al-Monitor, “The CPI and WPI surge in the Palestinian markets greatly affected the purchasing power of citizens, especially in the Gaza Strip, as more than a third of Palestinian workers receive less than the minimum wage in Palestine. Palestinians are forced to take out loans from local banks to bridge the gap between their wage and the soaring prices of goods.”

The head of the Palestinian Society for Consumer Protection, Azmi al-Shiokhi, told Al-Monitor that the price hike in the Palestinian markets stems from the lack of regulatory laws, such as competition and antitrust laws. “This allowed monopolistic companies to illegally control prices of goods,” he said.

He added that the cost of living monthly allowance disbursed by the Palestinian Authority, equivalent to 30 shekels ($8) per employee, is only about 0.1% of a minimum-wage salary.

“This is much lower than the rate of inflation, an average of not less than 3% annually. This is a financial burden on Palestinian families,” he explained.

A Jan. 8 report by the Palestinian Center for Human Rights showed that the poverty rate in the Gaza Strip exceeds 64% and that 80% of the population of Gaza is dependent on foreign aid.

“This is due to Israeli arbitrary measures, its blockade imposed on the Gaza Strip, its control of commercial activity and its closure of crossings for more than 10 years,” he said.