The Bethlehem Icon Center is seeking to revive iconography that originated in Palestine, by offering classes for Palestinians and foreigners eager to learn this ancient Christian form of art. 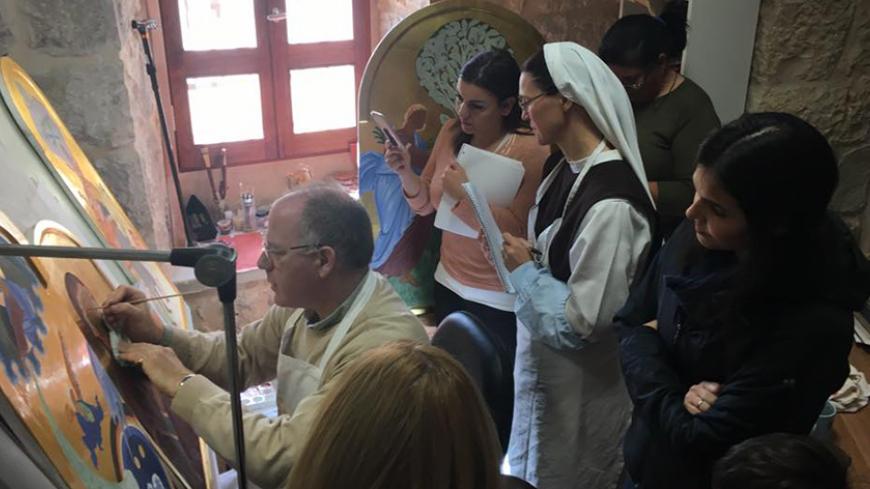 People watch a man paint a religious icon at the Bethlehem Icon School, Bethlehem, the West Bank, in this photo uploaded Nov. 26, 2016. - Facebook/bethlehemiconschool

BETHLEHEM, West Bank — Rosette Qaabar, a woman in her 50s from Beit Jala in northern Bethlehem, just attended her first of many courses that will allow her to get a diploma in iconography, which she had always been a fan of. This course is accredited by the British university of the Prince’s School of Traditional Arts, and it is one of many educational courses provided by the Bethlehem Icon Center.

Qaabar, along with four other women, have taken up the art of iconography after having learned the basic principles of this art.

By the end of the course, Qaabar wants to be able to paint her own icon, as well as one for each of her five children.

She told Al-Monitor, “Years ago, all my children immigrated to the United States but I could never leave my city. So I enrolled in the center for fun. I would spend my spare time here learning a beautiful, mystical art.”

The Bethlehem Icon Center on Star Street is a local center specialized in painting religious icons. On Feb. 7, the center kick-started its first iconography course for 2017, as part of its mission to revive Palestinian art.

Head of the center Nicolas Geha told Al-Monitor how the idea was born, saying, “In 2009, icon photographer Ian Knowles came to Bethlehem after he was invited by a friend to participate in the restoration of St. Nicholas Church in the town of Beit Jala. As he was repainting some icons and restoring others, the residents of the city asked him to teach them how to paint icons. This is where the idea of organizing courses came from. He kept going back and forth between England and Bethlehem to teach iconography in a small room provided by the monastery of the Coptic nuns.”

After a while, iconography received broad acclaim and the number of students increased. Knowles then moved into two rooms in Manger Square, where he started giving courses on a regular basis. Finally in 2014, the center was officially registered, with Hosh Abu Jarour as its headquarters.

Geha noted that the center’s officials seek to turn it into a specialized school for iconography, to be the first of its kind in the Middle East. It currently offers a number of courses to get a diploma in iconography accredited by the Prince’s School of Traditional Arts, which Qaabar attends.

Speaking about this art’s religious and national importance, Geha said, “Icons are part of our Palestinian Christian history. It is a Byzantine art born in Palestine and spread around the world. The first identified icon was that of St. Luke’s Jesus and Mary icon.”

He added, “In religion, painting icons is a fundamental art adopted by all churches. Such an art requires deep faith. Before painting an icon, which could be of Jesus, Mary or a saint, the person needs to carefully examine their life, history and the miracles they performed, and thus be well-acquainted with religion.”

Knowles told Al-Monitor that he is trying to bring this important art back to its rightful owners before his stay in Palestine ends and he returns to England in five years, by teaching a group of locals how to paint top-notch icons.

He noted, “My job is to reinstate this religious and artistic heritage where it belongs. This art is of Palestinian Christian origins and it is part of the hidden Palestinian history. Many people around the world, and even in Palestine itself, do not realize that this art first originated from Palestine. Most people mistakenly think it is an ancient Greek art.”

During the years he spent in Bethlehem, Knowles taught over a hundred students. He explained that this art requires a certain type of student who has mastered this specific kind of painting, noting that many students were able to paint icons on their own as a graduation project. According to Knowles, these courses included locals as well as foreigners who heard about the center and started attending courses.

While at the center, Al-Monitor met with Sister Marlena Kaczanowsk from Poland, who is taking advantage of her period of service at a Jerusalem church to learn iconography. She said she works in Jerusalem with people with special needs and in her spare time comes to the center to attend the course.

Although foreigners are allowed to attend these courses, Knowles believes the icons painted by Palestinian students are quite special, saying, “When people create something of their own heritage, it adds a distinctive quality to the icon.”

Proof is three of Knowles’ students, Noura Salibi, Chris Matar and Nicolas Geha, who participated in painting the Annunciation Icon at the British Lichfield church last year. They worked for two months straight and added Palestinian embroidery to their icon.

Geha noted that the center’s officials hope to expand their work and to be able to paint icons for the entire Christian world as a message of love and peace from Christ’s home area to all believers around the world.

The icons painted by Palestinians at the center carry a national religious message and reveal the Palestinian Christian heritage that many people are still unaware of. The Bethlehem Icon Center’s sole objective is to relaunch this art from its birthplace for the entire world to see and feel the spirit of Christ and his message.