Proud Egyptians have been putting the faces of their soccer team on everything from T-shirts to Ramadan lanterns, but when an artist decided to paint them as saints, all hell broke loose. 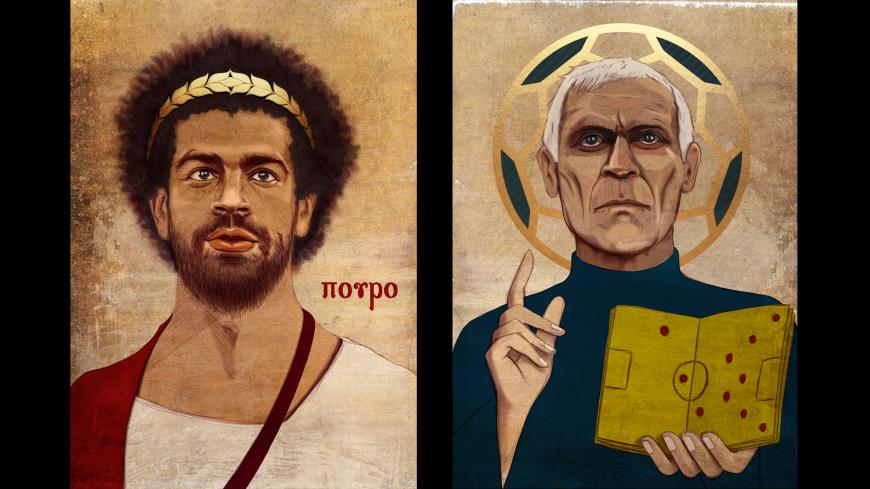 The faces of the Egyptian national soccer team have been everywhere, from T-shirts to Ramadan lanterns, ever since they made it to the World Cup. However, when el-Dostor, a local newspaper, published a portrait of coach Hector Cuper as Jesus Christ, some of the newspaper's readers thought it went too far.

The work is part of a series called “Egyptian Lullaby” by Egyptian artist Ahmed el-Sabrouti, who drew Cuper as Jesus and the national soccer team players as saints. Mo Salah, the famous soccer player who currently plays for Liverpool, is portrayed wearing a crown, with the inscription “King of Egypt.”

The digital portraits vaguely resemble what is known as Fayum portraits, the funerary portraits that date from the first century B.C. and are seen in wooden boards attached to Egyptian mummies from Roman Egypt. The name comes from Egypt’s Fayum Basin, where they were commonly found. This form of portraits, faces painted in detail in natural colors, are often seen in Coptic iconography in Egypt.

“If art is not bold and unexpected, then it is not art at all,” Sabrouti said. “I wanted to portray the national team in a style inspired by Fayum portraits, which are considered to be the first attempt of ancient artists to paint naturalistic portraits. This art is the godfather of the iconography that we see in the churches of Egypt today.”

The artist told Al-Monitor that he is now facing two separate legal cases for “insult and disdain of religion.” He did not give further details on who had sued him.

His portraits have also been brought before the Press Council by Hani Ramsis, a lawyer who specializes in Coptic issues, as well as personal and religious rights. Ramsis and a group of lawyers suggested that newspaper editors, thinkers and lawyers come together to form a mutually agreed upon policy on the use of Coptic art in newspapers.

“I commend using Coptic art in expression because it is an ancient Egyptian art that is not only related to Christianity but also to national heritage,” Ramsis told Al-Monitor. “It is a positive thing that an artist — or a newspaper — features Coptic art. But because there is a lack of understanding for Christian culture in Egyptian society, the artist didn’t understand the difference between using figures of saints and using the figure of Christ himself. Christians believe that Jesus is God and can’t be compared to any person on earth.”

Ramsis said that he neither requested a penalty nor an apology from the paper and the artist. “We only want respect for our religious icons and the Christian creed,” said Ramsis, who filed a complaint to the Press Council on June 23. “We are not after a punishment, only toward a way for cultural dialogue.”

Others do not want Coptic art to be used outside the church at all. Irini Samir, a writer at el-Hewar el-Motamaden and a theater director, said, “Coptic art is special to church and should not be imitated in any other way outside this context — it is not a worldly art.”

Sabrouti claimed that his portraits reflect cultural dialogue and exchange. “Egyptians are familiar with both contemporary and Pharaonic art, but Coptic art is relatively unknown and much too often confined to the inside of churches,” he said. “I wanted to pay homage to Coptic art, which is part of my heritage, as well as to the soccer players [who made Egypt proud again].”

“I wanted to feature Cuper in this symbolic portrait as a man with a game plan … a savior or a saint who faced a lot of criticism and obstacles to make the national team qualify for the World Cup for the first time in 28 years,” the artist told Al-Monitor, expressing surprise that his work was accused of showing contempt for Christianity.

“The halo behind him is a ball, which I used as a symbol of his knowledge and wisdom in soccer.” He brushed away the criticism that painting a ball as a halo was offensive. “The aura is used in different artistic works in Egypt and abroad to express the purity or wisdom of the person and it is never interpreted as contempt. People use emojis with a halo online every day.”

Sabrouti said that he wanted to do something in this style for years but decided to go ahead with the digital portraits now to celebrate the national team’s participation in the World Cup.

Egypt is a country famous for its soccer frenzy, particularly after the national team made it to the World Cup, though it was eliminated last week. Cairo’s coffee shops prepared themselves before each game, setting up extra chairs before a large screen so that large numbers of fans could watch the matches in groups. The faces of the national team’s players, particularly Mo Salah, are featured in murals around Cairo, on T-shirts, banners and even on the traditional lanterns hung during Ramadan.

Earlier this month, Egyptian President Abdel Fattah al-Sisi met with the players and coaching staff of the National Football Team before heading to Russia for the 2018 World Cup. During the one-hour meeting, the president told them that they have to fight to bring joy to Egyptians.