While the number of internally displaced persons returning to Mosul has increased significantly recently, the city's residents wonder when they can live in peace again. 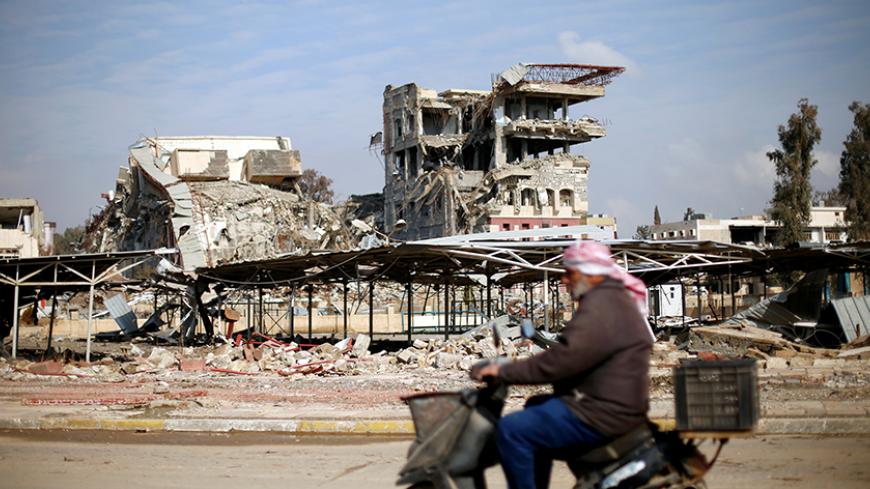 General view of a building of the University of Mosul destroyed during the battle with Islamic State militants, in Mosul, Iraq, Jan. 30, 2017. - REUTERS/Ahmed Jadallah

Following the Jan. 25 announcement of the liberation of eastern Mosul by Iraqi Prime Minister Haider al-Abadi, an increasing number of families are leaving the camps for internally displaced persons (IDPs) in the Kurdistan Region. They are returning to Mosul and its surrounding area in the hope of rebuilding their lives as the Islamic State (IS) retreats further and the government tries to shoulder its responsibilities.

On a burnt-out road in Nour neighborhood in eastern Mosul, where just two weeks earlier IS militants and Iraqi security forces fought a ferocious battle, former civilian pilot Abu Salim, 75, has a smile on his face and is happy to be alive in spite of the fighting and the airstrikes that targeted his neighborhood repeatedly. People like Abu Salim, flanked by two of his sons, are volunteering to clean the streets in the hope to restore a normal routine to their lives after living under IS terror for more than two years.

"[IS] destroyed all the Sunni cities in Iraq; they were the enemy of the Sunnis," Abu Salim said, echoing a prevailing sentiment in the city of Mosul.

This sentiment is in stark contrast with how the residents of Mosul felt in June 2014, when many Sunni residents were happy to see the Iraqi army and federal police, perceived to be highly corrupt and sectarian, being routed by a group of several hundred militants that morphed into IS.

The caliphate that IS proclaimed was a result of years of grievances and open revolt against the central government by the Sunnis in Ninevah province since the invasion of 2003. However, over 2½ years of IS rule has made residents question the insurgents and hope for a reconciliation with the government in Baghdad — a crucial opportunity for Abadi to make peace in this turbulent region. By the time the Mosul operation started in late October 2016, people in Mosul were so fed up with IS that hundreds if not thousands volunteered to provide intelligence to the army and the peshmerga forces to rid their city of what many described as the "savage" militants. The residents had enough of IS in a city that is renowned for its ancient history and coexistence between various communities and religious denominations.

But IS brutality reappeared, even if far away, once the Iraqi Counter Terrorism Service (CTS) liberated the eastern neighborhoods in early November. IS militants fired rocket after rocket into these neighborhoods, as they regarded the residents to have strayed from its puritanical interpretation of Islam by assisting the Iraqi security forces. In late January, two CTS officers attended to a motionless 71-year-old man lying on a stretcher with injuries to his right leg and his face in a clinic in Baladiyat neighborhood. "My father was cleaning outside our house in Sediq neighborhood when an improvised explosive device blew up in the rubble," said his son, who was erratically trying to help the medics as thick blood dripped from the old man's face.

The father's injuries were not life-threatening, but the sound of mortars landing in the distance meant more civilians like him were at the militants’ mercy. The punishment of the civilians by the militants was in contradiction to their message propagated to the Sunnis of Mosul for over 2½ years — that they were there to protect the Sunnis against their Shiite rulers in Baghdad.

This brutality from IS coupled with the supportive conduct of the CTS officers in dealing with civilians caught up in the fighting has played a crucial role in alleviating the people’s fear. In the early days of the Mosul operation, when CTS reached the first neighborhoods of the city on its eastern side, hundreds of civilians were treated by tireless CTS officers in rudimentary field clinics set up in damaged houses.

"Life is much better now," Mahmoud Kheder, who has been an employee at the Ministry of Education for 35 years, told Al-Monitor. "[IS] only knew killing." Life for Kheder and other residents is still very difficult; with no water and electricity this winter, it means his seven children will be shivering in the cold at night. But he said the fact that they have no IS terror hovering over their heads is enough to celebrate life.

"Our top priority in the local government is for the IDPs to return to their areas in and around Mosul," Sido Hussein, a member of the Ninevah provincial council, told Al-Monitor. "We are working hard to resume services such as water and electricity, but given the level of destruction by [IS], it will take some time."

Many in Mosul have lost everything, including their vehicles and homes in airstrikes, suicide car bombs or during the fighting. People who spoke to Al-Monitor said they hope the government will take responsibility for providing services and compensation so the residents can rebuild their lives. Mosul used to be the center for trade and industry in northern Iraq, and with its close proximity to Syria and Turkey, its economy could revive fast.

Peace in Mosul is crucial if Abadi wants to see stability in Iraq. Since the 2003 invasion, Mosul has been the strategic center of gravity for terrorist groups and it’s been in a state of rebellion. Until now, by and large the Iraqi security forces and in particular the CTS have treated the people in east Mosul with dignity and respect. However, in recent days, videos have surfaced on the internet that show individuals accused of collaboration with IS being killed on the spot. Other videos show children and adults accused of IS ties or membership being tortured and humiliated. Abadi has ordered a field investigation.

Mosul residents say that peace is possible in Mosul if the government continues its commitment to prevent sectarianism, provide services and increase transparency in a city where the government and corruption have gone hand in hand for years. But for now, while more than 750,000 people are under siege in west Mosul and await a bloody battle to be liberated, people in the east have different priorities. When asked about the three things the government can do for the residents right now, Abu Salim replied, "[Provide] water, electricity and kerosene."

He has no qualms about the damage that IS has done to the fabric of Iraqi society. "These beasts brought Iraq to its lowest point in history," Abu Salim said, adding in broken English while still smiling, “But I stay hopeful.”

by Murielle KASPRZAK and Joseph SCHMID | AFP | May 26, 2022
END_OF_DOCUMENT_TOKEN_TO_BE_REPLACED