Thousands of civilians at risk in Mosul crossfire

Civilian casualties are mounting during the Mosul operation, as thousands of people are stuck on the battlefield. 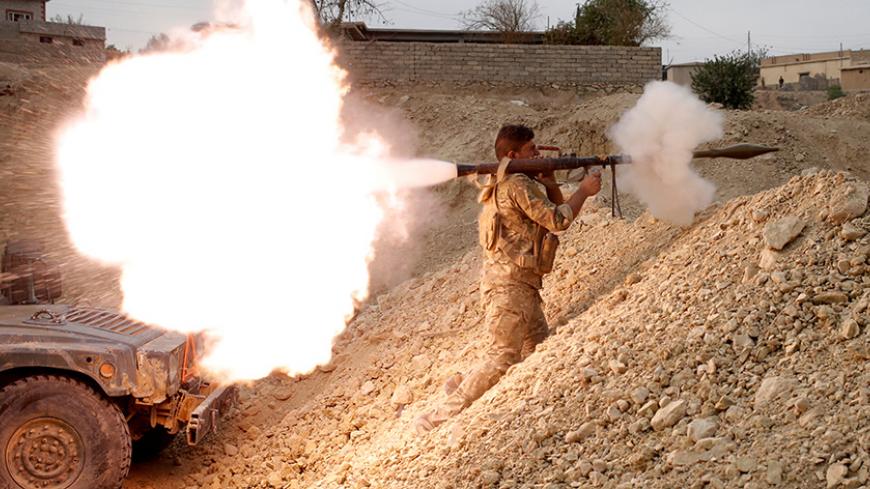 MOSUL, Iraq — Since the start of the highly anticipated Mosul offensive on Oct. 17, Iraqi security forces have received over 40,000 civilians fleeing eastern Mosul, according to a report published Nov. 9, by the Ministry of Displacement and Migration.

For two days, as Iraqi special forces battled Islamic State (IS) militants east of Mosul, Adib, who lives in the Intisar neighborhood in eastern Mosul, was trapped in the crossfire, unable to bury his brother's body as it began to decompose.

Finally, a group of people from his neighborhood offered to help him take advantage of a lull in the fighting to take the body to the nearby village of Sherzad, where they dug a grave and laid him to rest.

"The army liberated us but IS placed an [improvised explosive device] on my brother's front door," said Adib, placing rocks to mark where the head and feet were buried. "When my brother Khaled tried to open the door, he was killed and two of his children were wounded."

As Iraqi security forces push into densely populated areas of Mosul, the challenge is to win back not only territory but also the hearts and minds of civilians, many of whom initially welcomed IS as an alternative to the security forces they perceived as sectarian and heavy-handed.

Most residents have since come to despise the hard-line militants who massacre their opponents and have brought ruin on Iraq’s Sunni community since overrunning large swathes of the country and declaring a modern-day caliphate in the summer of 2014.

How the Iraqi army behaves toward the city’s residents as the battle unfolds will be the ultimate test for the future stability of Ninevah province, but it is complicated by IS' use of civilians as human shields.

“So far, all fear seems to have perished. The Iraqi security forces have displayed a high-level professionalism, possibly due to the new leadership under [Prime Minister Haider al-] Abadi,” said Rasha al-Aqeedi, a fellow at al-Mesbar Studies and Research Center in Dubai, United Arab Emirates, with a primary focus on Iraq. "This is indeed very positive. However, Mosul ops are not ending anytime soon and reports have begun to surface about violations and abuses of civilians at the hands of paramilitaries and sectarian elements.”

The number of civilian casualties from crossfire, as well as mines planted by IS, is also increasing, according to the United Nations Office for the Coordination of Humanitarian Affairs. "Families are at extreme risk of being caught in crossfire or targeted by snipers. Tens of thousands of Iraqi girls, boys, women and men may be under siege or held as human shields," it said in a statement Oct. 16.

The US-led international coalition has launched hundreds of airstrikes against IS targets in and around Mosul — the highest density anywhere across the militants’ so-called caliphate — and admitted this week that over the past year, 24 airstrikes in Iraq and Syria may have killed 64 civilians and injured eight other civilians, mostly near the city.

"It's a key tenant [sic] of the counter-[IS] air campaign that we do not want to add to the tragedy of the situation by inflicting addition [sic] suffering," the USCENTCOM statement read.

But Airwars, which monitors the toll of civilian casualties as a result of international airstrikes in Syria and Iraq, said its researchers had tracked and attempted to vet over 110 separate claims of civilian casualty incidents in Mosul itself in two years of airstrikes. The civilian toll of those attacks could be as high as 1,300, it recently reported.

In Gogjali, on the eastern fringes of Mosul, locals claimed at least three airstrikes in the past six months had killed civilians. "The airstrike around six months ago killed 15 [IS] in this house," said Ibrahim Akram, pointing to a flattened house with smoke rising in the distance as the army battled IS in another residential area. "But three civilians died too in the house next door."

IS has wasted no opportunity to draw attention to casualties resulting from coalition airstrikes and Iraqi artillery fire as an argument that Sunnis must resist, publishing videos showing the mangled bodies of children and adults allegedly killed by airstrikes or artillery fire.

In a new video released by the IS branch in Deir ez-Zor, Syria, this week via Telegram, three angry IS militants call on the Sunni people of Mosul to resist the Shiite army. "When they entered Homs … they exploited women, killed children and slaughtered them," screams angry IS preacher Abu Abdul Rahman al-Qonayteri in military fatigues. "Oh people of Mosul … they will do the same to you, God forbid … so be steadfast, as you are in the right."

Not far from the graveyard in the village of Sherzad, children mingled with soldiers as the soldiers fired mortar after mortar into the Intisar neighborhood.

"Keeping a safe corridor open for civilians must be a priority as the battles shift into urban warfare," said Aqeedi. "Door-to-door fighting against a group like IS puts hundreds of thousands at grave risk."

Despite the danger, Adib and his friends waited for several hours to cross back into their quarter in east Mosul. "I need to go back to the Intisar neighborhood," said Adib, whose saddened face spoke volumes about the tragedy that is unfolding in the streets of Mosul. "My family is still there."