Is Jordan's state security court threat to freedom of expression?

As the Jordanian authorities arrested about 20 activists and referred them to the controversial State Security Court, some have been voicing criticism against the use of loose charges to silence peaceful opposition voices. 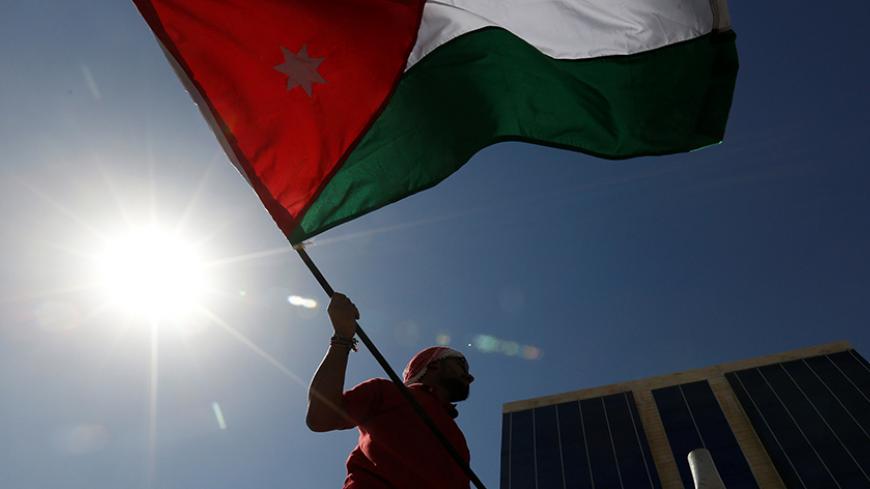 A Jordanian protester holds a Jordanian national flag and chants slogans during a protest against a government agreement to import natural gas from Israel, in Amman, Jordan, Oct. 7, 2016. - REUTERS/Muhammad Hamed

Former Jordanian member of parliament Wasfi al-Rawashdeh didn't know that the letter he addressed via Facebook Jan. 5 to Jordan's King Abdullah II would lead him to appear the following day before the State Security Court (a military court) on charges of undermining the system of governance under the Jordanian Penal Code. In the letter, which he titled “The last call,” Rawashdeh criticized the unprecedented corruption in Jordan and wondered, “Is the king aware of what is going on?”

Rawashdeh is one out of a long list of activists who were arrested by the Jordanian intelligence service in January and were referred to the prosecutor of the State Security Court. These include retired intelligence service Gen. Mohammed Abdul Karim Otoum who was arrested Jan. 12 after he called for a political reform conference. Among those arrested were also citizens who launched social networking campaigns aimed at boycotting goods in protest against the economic approach of the government.

Political activists have accused the Jordanian authorities of widely using loose charges in their legislation in order to muzzle the peaceful opposition calling for political reform, anti-corruption measures and solutions to the economic crisis. The arrests came after the government adopted in December a set of economic measures aimed at raising consumer prices and imposing taxes so as to provide the 450 million Jordanian dinars (about $635 million) needed to fill part of the 2017 budget deficit, which amount to about $1.1 billion.

Hisham al-Hisa, an activist taking part in the protests, was accused three times of repeated verbal insult and unlawful assembly after he took part in the peaceful protests against the Jordanian regime in 2011-2013, before the Arab Spring came to a halt in Syria and transformed into a fierce war that had repercussions on Jordan. Hisa told Al-Monitor, “The State Security Court is holding a gun to the head of advocates of reform in Jordan."

In this context, political analyst Labib Kamhawi told Al-Monitor, “The arrest of political activists is an extension of previous periods when the authorities would make loose accusations against opposition activists. Such accusations include undermining the system of governance, leveling criticism against [the government] and assembling illegally.”

Kamhawi said that the authorities resorted to these charges “in an attempt to scare those who dare oppose the government, especially considering that these charges were subject to severe sanctions under the law.”

The Jordanian authorities’ wide referral of activists to the State Security Court raised the ire of politicians and jurists who launched a campaign in 2013 titled “I deserve a civil trial” to call for an end to the military trials.

President of the Jordan Bar Association and former member of parliament Saleh Armouti told Al-Monitor, “Giving further powers to the State Security Court is unconstitutional as this is a special court that encroaches upon the judiciary.”

Armouti said, “It is the prime minister who appoints civilian and military judges in the State Security Court. Consequently, this court is not recognized by Interpol. The powers of the court have been expanded through the Anti-Terrorism Act so that the freedom of opinion and expression fall within the concept of terrorism. This would deal a blow to the freedom of opinion and expression and prevent any human being from giving their opinion, especially in regard to political issues.”

According to Armouti, the second constitutional violation related to the State Security Court lies in “the fact that the court prosecutor is based in the General Intelligence Department, which morally, psychologically and financially affects the course of the investigation. The trial of civilians should be moved to the public prosecutor.”

For its part, the Jordanian government repeatedly confirmed its respect for the freedom of opinion and expression. In response to parliamentary inquiries about the reasons behind the arrest of 20 political activists, Prime Minister Hani Mulki said at a Jan. 15 parliamentary regular session, “The government guarantees the freedom of expression and constructive criticism so long as homeland security is not affected and the law is not encroached upon.”

He added, “Those who have been arrested by the Jordanian judiciary carried out provocative acts that provoke the public opinion and change the basic conditions of society.”

Al-Monitor contacted Musa Maaytah, the minister of political development and parliamentary affairs, and Mohammad al-Momani, the minister of state for media affairs and communications and government spokesman, to ask them about the arrest of activists, but they refused to comment on the issue.

The recent arrests carried out by the authorities against teachers, retirees and politicians received criticism from human rights organizations. Human Rights Watch Middle East Director Sarah Leah Whitson told Al-Monitor, “The Jordanian authorities have been using the charge of undermining the political system of governance mentioned in the terrorism section of the Penal Code for many years now against militants, and the authorities should stop muzzling the peaceful opposition.”

The Jordanian authorities used Article 149 of the Penal Code for the first time in the history of the judiciary on April 1, 2011, when the prosecutor general of the State Security Court used it against teachers who protested at the Fourth Circle, near the prime minister's building, demanding the establishment of a teacher syndicate. The court used the article once again in January against 20 detainees before releasing them Feb. 7.

Article 149 states that temporary hard labor is imposed on whoever undermines the political system of governance in the kingdom, incites opposition to the regime or attempts to change the economic or social entity of the state or the basic conditions of society.

For his part, head of the Jozoor Center for Human Rights Fawzi Samhouri told Al-Monitor, “The government is contradicting the obligations it ratified in the Universal Declaration of Human Rights, the International Covenant on Civil and Political Rights and the Jordanian Constitution, all of which stipulate the right to freedom of peaceful expression.”

Jordanian activists fear the government and general intelligence service’s continued use of loose charges under the pretext of the fight against extremism. On June 20, the authorities revealed their intention to enact a new law on social networking sites to monitor the Jordanian pages across these networks in order to combat extremism.