Netanyahu and the 'apartheid state'

Under Prime Minister Benjamin Netanyahu, the term “apartheid state” has gone from being a label to becoming substance. 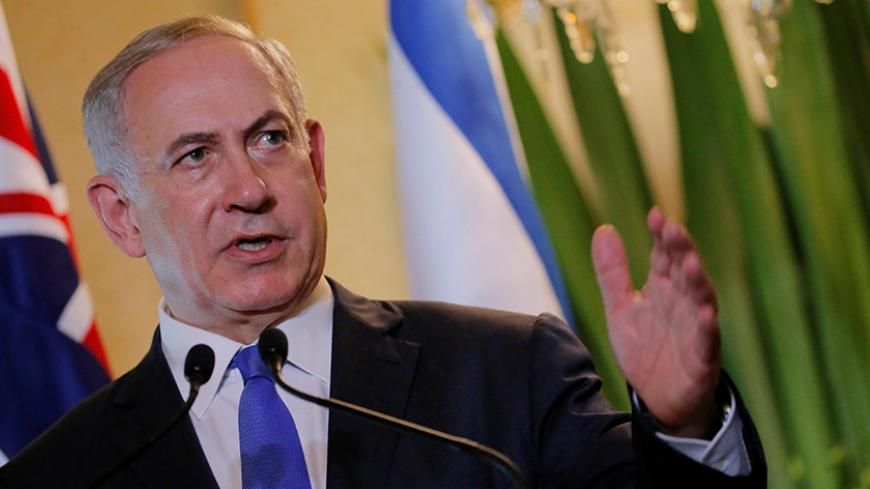 Prime Minister Benjamin Netanyahu has come up with a new, supposedly sophisticated answer for pesky journalists who ask whether he still supports the two-state solution. If Netanyahu responded that he hopes for the establishment of a Palestinian state alongside Israel, he would incur the wrath of his friends in the government, the Likud and the Knesset. On the other hand, if he said the two-state solution is dead in the water, he would face condemnation by the entire international community. He cannot, however, simply ignore the question. So what can he do? Throw out the response, “Rather than deal with labels, I want to deal with substance.”

Netanyahu tested this evasion tactic Feb. 15 at a joint White House news conference with President Donald Trump. A week later he recycled it while standing alongside his Australian counterpart, Malcolm Turnbull, at a news conference in Sydney.

At both conferences, Netanyahu listed two issues of substance, as he called them, that are more important in his view than labels. The first is Palestinian recognition of Israel as the homeland of the Jewish people. In other words, that is the label the state of Palestine is required to attach to the State of Israel. If that’s a matter of substance, then Israel has a big problem with the peace treaties it signed with Egypt and Jordan. As everyone knows, there is no mention of Israel’s Jewish identity in those documents. The second issue is the demand that Israeli security forces retain control of the independent neighboring state. This is, indeed, a matter of substance, but it is not feasible. Palestinian President Mahmoud Abbas has made it quite clear that he would be willing to accept the deployment of an international force in an independent Palestinian state, but would under no circumstances allow an Israeli soldier to set foot on the land of Palestine.

The two-state solution is losing all relevance in terms of public awareness and substance in Israel. The right wing is doing all it possibly can to obliterate it from the public and media discourse or to besmirch labels referring to a diplomatic resolution to the conflict with the Palestinians: Evacuation of settlements is, in right-wing parlance, the “uprooting of settlers”; the West Bank is referred to by the biblical Judea and Samaria; “terror state” is substituted for “Palestinian state”; and human rights and peace organizations are the “radical left.” There are several noteworthy recent actions pointing to the two-state solution's loss of relevance.

A Knesset bill proposed Feb. 26 by Shuli Mualem-Rafaeli of HaBayit HaYehudi would revoke the fee waivers for freedom of information requests by nongovernmental organizations supported by a foreign state. Writing on her Facebook page, Mualem-Rafaeli argued that the point of her initiative is “to reduce the intervention of European governments in the State of Israel by using organizations with foreign agendas.” Indeed, exposing the theft of Palestinian land, reporting violent attacks against Palestinians and holding peace marches are foreign agendas in the view of the current Israeli administration.

Earlier, on Feb. 20, the Knesset approved legislation to fine firms that refuse to provide transportation or repair services to Jewish settlements whether for reasons of security or ideology. Anyone denied service without being given advance notice — the company must post a sign near the register warning that it does not provide services in the West Bank — could sue the company for compensation of up to 10,000 Israeli shekels ($2,730). As Knesset member Dov Khenin of the predominantly Arab Joint List party said during debate on the bill, this is part of a series of laws seeking to promote the de facto Israeli annexation of Palestinian territory.

The series includes regulations issued by Culture and Sports Minister Miri Regev encouraging artists to perform in the settlements and punishing theaters that refuse to perform in the occupied territories. The Green Line, delineating Israel and the occupied territories on all internationally recognized maps, has been erased from Israeli textbooks and no longer appears on weather maps published every day in the left-leaning newspaper Haaretz.

Television weather presenters always make sure to mention the weather forecast for the West Bank settlement town of Ariel, at the heart of the West Bank. Two football clubs from Ariel are among the six settler squads belonging to the Israel Football Association. Kerem Navot, an Israeli NGO that monitors Israeli land policy in the West Bank, found that the football fields of these six teams were built on land belonging to Palestinian villages. The football field in Givat Ze’ev for instance, is on land owned by two Palestinian families. If the state is allowed for the purpose of sports to take over land intended for the establishment of a Palestinian state, then from the right-wing perspective, taking the land is even more legitimate if for military needs, economic development or upgrading road infrastructure.

According to a report by Kerem Navot in 2015, almost one-third of the land in the West Bank — including more than half the land of Area C, under complete Israeli control — is closed off to Palestinians on the grounds that it is a military area. The Israeli military makes no use of close to 80% of the land it has designated as “closed military areas” for drills. On Feb. 20, Haaretz reported on another Kerem Navot study revealing that 15% of the 91 industrial zones supported by the Economy Ministry are located across the Green Line, although only 5% of the Israeli population lives there. Most of the land is unused. Thus, for example, the industrial zone for the Shiloh settlement covers 500 dunams, but the plants in the compound take up no more than 28 dunams and employ 36 workers. Transportation Minister Israel Katz announced this month that the government would invest billions of shekels in a road and rail system linking the settlements — first among them Ariel — to central Israel and Jerusalem.

It is no longer necessary to ask whether the Israeli government supports the two-state solution. The answer is clear for all to see in the laws it passes and the edicts it imposes. The answer is to be found in the language it propagates and the funds it disperses. One state for two peoples — first-class citizens and second-class citizens — is gradually being established on the land between the Jordan River and the Mediterranean Sea. On Netanyahu’s watch, the term “apartheid state” has gone from being a label to becoming substance.