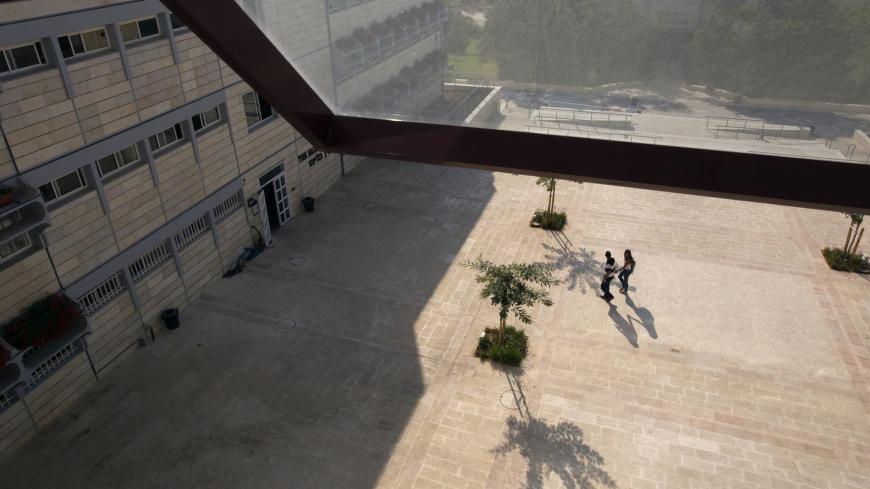 Students walk through the campus of Ariel University Center in the West Bank Jewish settlement of Ariel, Sept. 13, 2012. - REUTERS/Ronen Zvulun

The White House has yet to unveil the president’s plan for Israeli-Palestinian peace, but President Donald Trump has already made clear that it includes recognition of Jerusalem as the capital of Israel and ignores the historic Muslim-Arab-Palestinian affinity for the city. To clear any doubt on the matter, Trump announced Jan. 25 at the World Economic Forum in Davos that his recent recognition of Jerusalem as the Israeli capital, and his intention to relocate the US Embassy to the city, preclude any negotiation over the city’s future. Trump also declared that “Israel does want to make peace,” whereas the Palestinians “are going to have to want to make peace” or else “we’re going to have nothing to do with it any longer.” Trump seems to have forgotten that because he took the explosive issue of Jerusalem off the table, without leaving any options for the Palestinians, they have already announced that they want nothing to do with him.

It would be interesting to know on what Trump based his assertion that Israel does want peace. Perhaps he didn’t have time to glance at the decision adopted the day before by the Knesset’s Education Committee that approved legislation imposing Israeli sovereignty over academic institutions in the West Bank. The decision sent the bill to the Knesset plenary for the first of three votes before it becomes law. On Jan. 29, the proposed legislation was already adopted at a first hearing. (Two more votes are necessary for the law to be approved.)

Current Israeli law does not apply to institutions operating in the territories that Israel has occupied since 1967. When the college of the settlement town of Ariel applied to become a university, the Council for Higher Education responded that this was not within its jurisdiction. In the early 1990s, the government formed a separate Council for Higher Education to oversee Ariel’s college, upgrading it to a full-fledged university in 1992; it is now authorized to grant academic degrees. The new law would shut down the separate council and present the Council for Higher Education with a fait accompli — responsibility for an institution that it did not recognize in accordance with its respected, international academic standards.

A representative of the council, headed by Education Minister Naftali Bennett who is also chair of the pro-settlement HaBayit HaYehudi party, told the Knesset panel the decision was political. The author of the proposed bill, Knesset member Shuli Mualem-Rafaeli of Bennett’s party, made no bones about the intentions of the legislation. “Alongside the academic importance of the law,” she said, “there is also a clear element of imposing sovereignty, and I am proud of both.” Education Committee members, including centrist Yesh Atid party members, were not bothered by the fact that the institutions they want to annex are located in occupied territories, while residents of these same territories are excluded from Israeli campuses.

Legislation erasing the line that has for 50 years distinguished between sovereign Israel and the territories it occupies is clearly not limited to academic issues. Three days prior to the committee vote on academic annexation of the Israeli institutes of higher learning in the West Bank, a ministerial committee approved a dozen proposed government bills relating to Israeli settlements. Among them is a law annexing the settlers’ chickens by combining the egg quotas of Israeli poultry farmers in the West Bank with those of their fellow farmers in Israel. Three weeks earlier, on Jan. 3, Justice Minister Ayelet Shaked reported to the Knesset’s House Committee that every piece of proposed government legislation would apply to both sides of the 1967 Green Line from now on. Shaked, a member of the inner decision-making body known as the Diplomatic Defense Cabinet, explained that the new rule reflects government policy of advancing settlement in all parts of the Land of Israel “and normalizing life in Judea and Samaria [West Bank] too. There is no occupied state that is seeking to get back its occupied area,” Shaked added. Mindful of the fact that Israel rejects the very use of the word “occupied,” she was quick to correct herself and say, “seeking to get back its area.”

Tourism Minister Yariv Levin of the Likud Party backed up Shaked, saying, “The correct thing to do is to impose our sovereignty over all the areas of the Land of Israel.” Deputy Defense Minister Eli Ben-Dahan announced that his office was “moving forward with legislative procedures to equalize the laws that apply on the little State of Israel and not on Judea and Samaria.” The Knesset’s legal adviser, Attorney Eyal Yinon, reminded members of the committee that norms set by the parliament apply only to the state’s sovereign territory. He noted that as long as Israel has not imposed its law, jurisdiction and administration on the West Bank, its norms could not apply to that area.

European leaders agree that Israel’s legislative and executive arms should not have a say in the occupied territories. They insist that a two-state solution to the Israeli-Palestinian conflict is not compatible with moves such as the application of Israeli laws in the area that the Palestinians are claiming as their future state. For example, last week the Danish parliament voted overwhelmingly (81-22) in favor of excluding the settlements from any agreements between Denmark and Israel and tightening guidelines against the investment of public and private funds in the occupied territories. At the same time, the Danish lawmakers expressed support for an initiative by the UN High Commissioner for Human Rights who is compiling a blacklist of companies doing business with West Bank settlements.

Now that Prime Minister Benjamin Netanyahu has announced that absent US mediation, there would not be a peace process with the Palestinians, the Europeans need not worry that taking a tough line on the settlement and annexation policy would undermine prospects of negotiations. On the other hand, Netanyahu has enough worries at home, with the police investigations against him, the political fights over the Sabbath and the public campaign against the government’s decision to deport asylum-seekers. He does not want another front. For eight years, he has resisted settlers’ pressures with the excuse that former US President Barack Obama was getting in his way of annexing territories. Obama has left the White House, taking with him Netanyahu’s excuse. Bennett and his party friends are taking advantage of Netanyahu’s warm relationship with the Trump administration to push him into a dangerous corner. When the president of the United States praises the settler-backed government’s desire for peace and threatens the Palestinians that they have “to want peace,” the dynamite in that corner could go off.