Despite tough talk, US unlikely to take on Iranian forces in Iraq

The new US administration has adopted strict stances toward Iran, but any military clash between the United States and the factions Iran supports in Iraq would only increase Iranian influence. 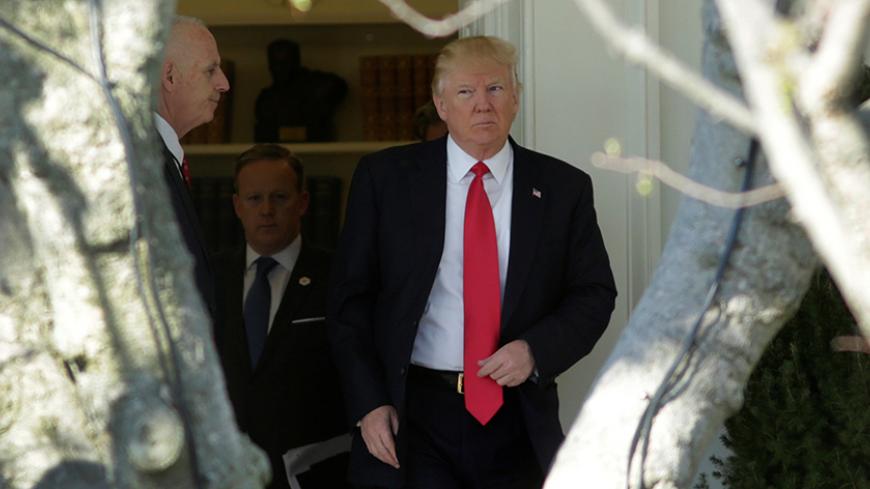 US President Donald Trump walks out from the Oval Office of the White House in Washington, Feb. 24, 2017. - REUTERS/Yuri Gripas

US President Donald Trump and Iraqi Prime Minister Haider al-Abadi have spoken over the phone about the Iranian threat in the region, according to a White House statement issued Feb. 10.

On Feb. 1, Trump tweeted, “Iran is rapidly taking over more and more of Iraq.” Iranian influence in Iraq has risen since the fall of Saddam Hussein’s regime in 2003, and especially after the withdrawal of the last US troops at the end of 2011.

Since the new US administration took office on Jan. 20, it has adopted a strict stance toward Iran. As a result, disputes between the two countries have increased. In response to Iran’s ballistic missile test and following the Iran-backed Houthis’ targeting of a Saudi warship off the Yemeni coast, former US National Security Adviser Michael Flynn officially warned Iran on Feb. 1 and condemned its activities that he said “undermine security, prosperity and stability … in the Middle East.”

On Feb. 4, Secretary of Defense James Mattis described Iran as “the single biggest state sponsor of terrorism in the world.” Vice President Mike Pence echoed Mattis in his speech at the Munich Security Conference on Feb. 18.

In response to the US statements, Iranian Foreign Minister Mohammad Javad Zarif tweeted on Feb. 3, “Iran is unmoved by these threats.” Islamic Revolutionary Guard Corps (IRGC) Commander Gen. Hussein Salami said on Feb. 2, “Our missiles, warships and launchers will increase by the day.”

The commander of the IRGC Ground Forces Brig. Gen. Mohammad Pakpour threatened the United States on Feb. 22 with “a painful slap in the face if it makes a faux pas.” Press reports noted that the United States is taking steps in the region to form an anti-Iranian military alliance including Arab states and sharing intelligence with Israel.

There are concerns about Iraq once again becoming a battlefield to settle accounts between Iran and the United States. In a clear indication of Iraq’s unwillingness to become involved in conflicts between the United States and Iran, the report issued by Abadi’s office on Feb. 9 regarding his phone call with Trump did not mention the Iranian threat. When asked about his phone call with Trump during the weekly press conference on Feb. 14, Abadi said, “The US and Iran are enemies, but Iraq is not part of this enmity.” Abadi repeated his stance at the next press conference on Feb. 21.

Former Iraqi Ambassador to the United States Lukman Faily told Al-Monitor over the phone, “The first signs indicate increasing pressure on Iraq, especially since Trump, unlike his predecessor Obama, does not want to improve relations with Iran.” He added, “The Iraqi government is closely watching the moves of the US and Iran, which might have a bad influence on Iraq and its attempts to manage the risks threatening it.”

Maysam Behravesh, a Ph.D. candidate in international relations at the Swedish Lund University, told Al-Monitor over the phone, “Iran is at its strongest in Iraq now. The Iran-backed Iraqi armed groups have gained wide fighting experience through their battles with the Islamic State [IS]. They now carry arms and equipment that they did not have before. Besides, these groups have a large public base because they succeeded in halting IS’ advancement in 2014 and played a remarkable role in liberating important regions in Iraq. This will make their participation in the upcoming elections strong.”

During the US invasion of Iraq, Iran backed armed factions there to keep the threat of a US attack on itself at bay. Behravesh, who follows Iran’s foreign policy closely, told Al-Monitor, “If the escalated tone in statements is coupled with realistic military threats, Iran will use the Iraqi armed factions to pressure the United States. This might result in a military clash between the United States and Iran on Iraqi territories.”

Any military clash between the United States and these factions would undermine Abadi’s attempts to contain the Shiite factions in Iraq and increase Iranian influence, going against the goals of Trump’s administration to limit Iran's activities in the region. Unlike his predecessor Nouri al-Maliki, Abadi does not have ties to Iran. Tensions between Abadi and several leaders of the Popular Mobilization Units, who are close to Iran, have surfaced in the past. They accused him of marginalizing the group. If Iran feels an imminent threat, it will not only exert military and security pressure on Iraq, but will also use its political influence to push for the election of a friendlier prime minister to reduce US influence there.

A clash between the United States and Iran-backed Iraqi military factions will weaken these factions in their fight against IS, making an IS comeback possible. As Trump indicated by calling on US military leaders to create a plan to defeat IS within 30 days, the US administration is unlikely to jeopardize this goal.