What will Trump era mean for Gaza?

The Palestinians paid close attention to the inauguration speech of US President Donald Trump, who promised to eliminate radical Islam — something Hamas took personally. 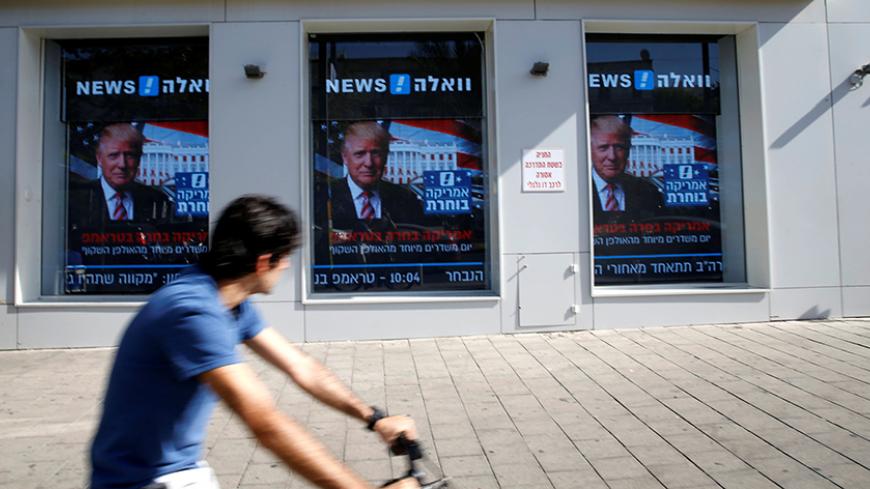 Ever since US President Donald Trump took up office in the White House on Jan. 20, Palestinians have felt the weight of tensed relations in the years ahead, in light of his positions supporting Israel and his expected hostility toward the Palestinians. Trump has expressed his intention to move the US Embassy from Tel Aviv to Jerusalem, and apparently believes the settlements in the West Bank are not an obstacle for resuming negotiations between Israelis and Palestinians.

Indeed, Trump began his inauguration speech Jan. 20 by threatening to eliminate radical Islamic terrorism. Although Trump did not mention Palestine, Mousa Abu Marzouk, a member of Hamas’ political bureau, said on the same day that Trump’s stance against Palestine does not serve the region’s stability, but rather entices Israeli extremists to exhibit more extremism.

Hamas seems to believe that under Trump’s reign, Israel would more easily pressure the movement, by tightening the blockade imposed on the Gaza Strip since 2006, or even carrying out a military aggression against it. To make matters worse, Trump’s inauguration came only a few days before Israeli Defense Minister Avigdor Liberman mentioned Jan. 24 the possibility of occupying a quarter of Gaza in the coming war.

Husam Badran, a Hamas spokesman and former commander of its military wing, Izz ad-Din al-Qassam Brigades in the northern West Bank, told Al-Monitor, “Hamas is a resistance movement that believes Israel is its only enemy. We operate within the occupied Palestinian territories. The new US administration should re-examine the situation in our region to see that putting a check on people’s choices and denying them the chance to reach their ambitions cannot last forever; the people in the region have the right to freedom much like the rest of the world.”

On Jan. 24, Hamas issued a statement about the US intention to move its embassy to Jerusalem, warning about Trump’s biased policy toward Israel. The statement said the US president’s positions create an unstable atmosphere and add fuel to the fire in the region, calling on Palestinians to confront Trump and set the resistance in motion as a strategic choice.

Another observation made by Hamas was Trump’s tight relationship with Egyptian President Abdel Fattah al-Sisi, who was the first Arab president to congratulate Trump on winning the presidency. It should be noted that Sisi does not hide his hostility toward Hamas and has made great efforts to dry up its financial sources and limit its military capabilities, by destroying the tunnels between Gaza and the Sinai Peninsula.

In this context, Ahmed Yousef, a former political adviser to Hamas’ political bureau Deputy Chairman Ismail Haniyeh and founder of the House of Wisdom Institution for Conflict Resolution and Governance in Gaza who lived for many years in the United States up until 2006, told Al-Monitor, “With Trump as president, Israel will find a good opportunity to deal a heavy blow to Gaza, as part of its ‘mowing the grass’ policy that Israel has been adopting since 2006. However, any Israeli aggression against Gaza could start from Sinai, where the armed organizations are located.”

Yousef said, “If Egypt and Israel were to think that Sinai has turned into a breeding ground for [terrorist] organizations, they would accuse Gaza of providing these organizations with financial and armed support, as a pretext to get a US cover to attack [Gaza]. This is why organizations active in Gaza — such as Hamas and other armed resistance factions — should stop flaunting their military power as the situation at this moment is critical and cannot afford any security tensions.”

Hamas’ concerns about Trump do not mean that his predecessor Barack Obama had a peaceful relationship with the movement. Obama had supported two wars waged by Israel against Hamas in 2012 and 2014 — even if political differences existed between Washington and Tel Aviv over ending these wars more quickly. But under Trump’s reign, these differences could subside.

Osama Abu Arshid, a Palestinian researcher at the Arab Center for Research and Policy Studies in Doha and a resident of the United States, told Al-Monitor, “Attacking Hamas in Gaza is an Israeli decision, although Trump would give Israel more aggressive support to strike Hamas. Trump is the most populist, extremist and arrogant president there is and he could stand beside Israel in its aggression against the Palestinians, while classifying Sisi and Syrian President Bashar al-Assad as role models in fighting Islamists. This is why Hamas has every right to fear an alliance between Sisi, Trump and Israel against it.”

It seems that the Palestinians are not only afraid of an upcoming Israeli war against Gaza under Trump’s presidency; they fear that the international silence about the horrifying scenes of bloody battles and attacks against armed groups in Syria and Egypt could incite Israel to commit the same atrocities against the Palestinians, if encouraged by Trump.

In this regard, Yoni Ben-Menachem, a former officer of the Israeli military intelligence service, told News1 on Jan. 25 that Hamas is worried about a rapprochement between Trump and Sisi as well as their alliance against the Muslim Brotherhood and Hamas, as one of its wings.

Ghazi Hamad, the undersecretary at the Foreign Ministry in Gaza, told Al-Monitor, “Israel waged three wars against Gaza in 2008, 2012 and 2014 but failed to achieve any political gains. This might persuade it from pursuing a fourth war under Trump’s reign. However, it does consider the tunnels dug by Hamas to be a pivotal threat and will raise this issue as a main point of discussion in the upcoming period in order to obtain further support from Trump. This, however, does not guarantee that a fourth war will not erupt, especially since Palestinians still lack any Arab support today, despite the relative stability since the 2014 war.”

Hamas seems worried about Trump’s advent to power while the Israeli police are investigating Israeli Prime Minister Benjamin Netanyahu on corruption charges. The Palestinians believe Netanyahu will be able to dodge these charges and avoid any ensuing dismissal attempt by attacking the Gaza Strip and diverting Israelis’ attention away from his government and partisan issues, after being given carte blanche by Trump to act as he pleases.